We Rode In The Car Astronauts Could Drive On Mars

Mark Watney, eat your heart out 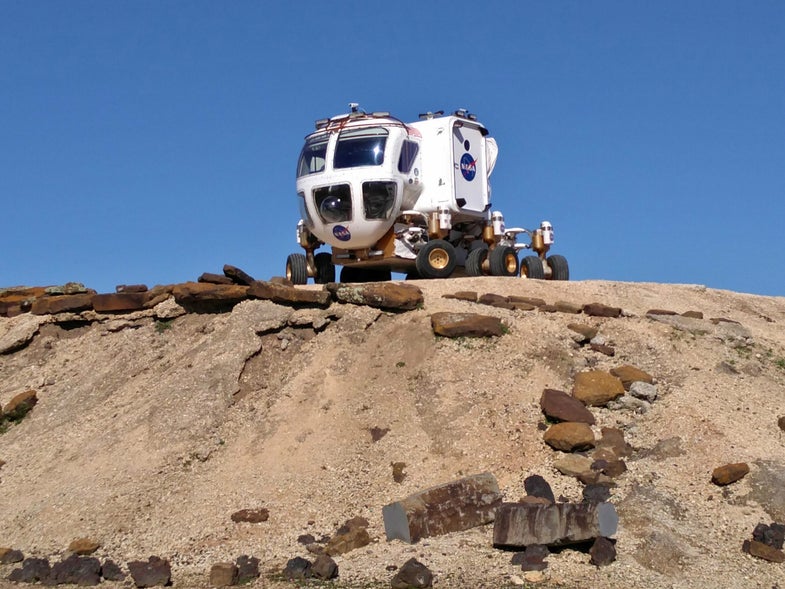 In The Martian, fictional astronaut Mark Watney rides around Mars in a badass, futuristic-looking rover. Well, like most things in the book/movie, turns out that vehicle isn’t so far from reality. NASA hopes to send humans to Mars in the 2030s or 40s, and in preparation, they’re developing the Space Exploration Vehicle—a rover that looks strikingly familiar to anyone who’s seen the movie. At the Johnson Space Center in Houston, Popular Science got to ride in it.

Full disclosure: This trip was paid for by Twentieth Century Fox, the makers of The Martian movie, which comes out on Blu-Ray/DVD on January 12.

NASA’s Space Exploration Vehicle is a just a prototype for now, but future solar-powered versions might one day fly to Mars, arriving on one of several pre-supply missions that will deliver food heavy equipment ahead of the astronauts’ arrival.

The rover has twelve wheels, arranged in six sets of two, and each pair rotates 360 degrees. That means it can turn on a dime and drive sideways as well as forward and backward.

Cameras on each side of the vehicle help the driver navigate in all directions. 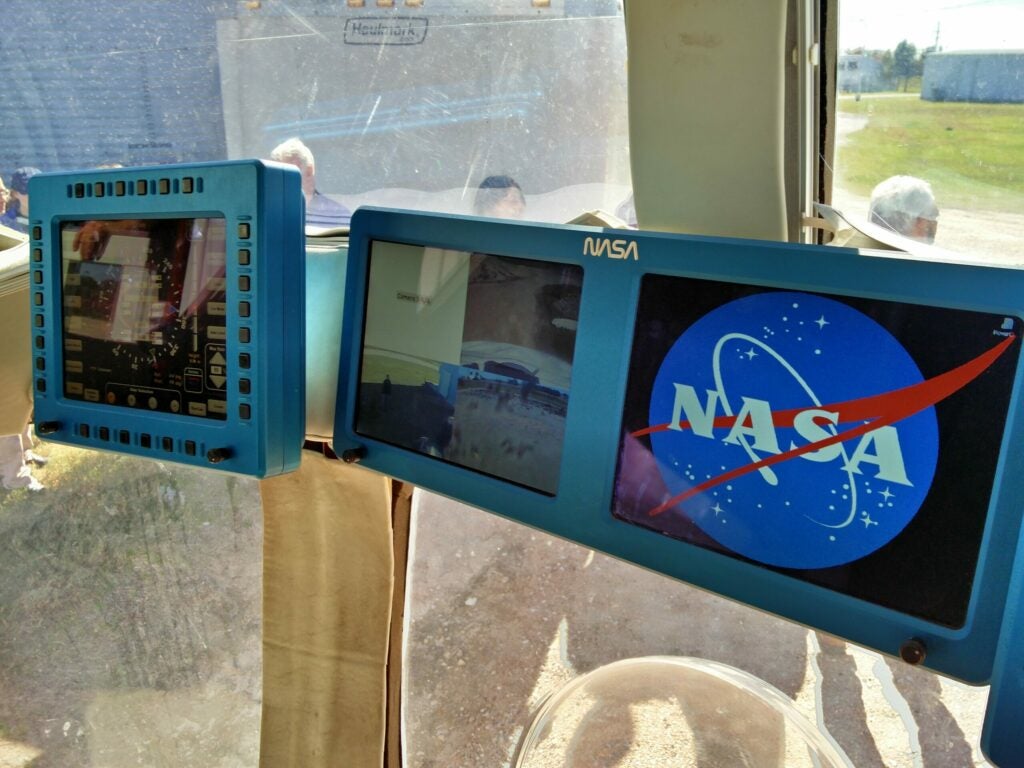 Control panels inside the rover

The fact that the wheels have a turning radius of zero helps the rover traverse the sort of rocky landscapes it will encounter on Mars.

It’s a bumpy ride, but the rover doesn’t get stuck.

Inside, the rover comfortably seats a driver, co-pilot, and four people on benches in the back. Going over slopes can feel a little treacherous, but the driver, Lucien Junkin, assures us that the rover can master hills as steep as 55 degrees.

Junkin says the vehicle can move at up to 10 miles per hour, and NASA says it’ll hold up even after a few thousand miles of driving.

In The Martian, Watney accidentally flips his rover upside down, so I ask Junkin how the Space Exploration Vehicle manages to stay upright. Although the cabin looks large compared to the wheels, “it’s really very, very light relative to the rest of the vehicle,” he says. Below the cabin, hundreds of pounds of batteries help to stabilize it, and so does the wide footprint provided by the wheel positioning.

Still, the ride is nerve-wracking, with everyone struggling to stay in their seats as the rover throws us around. The engine whirs, and the body of the rover creaks from the stress of the inclines and bumps.

Up near the pilot’s seat, a bubble sticks out to allow future astronauts to look below the vehicle, to inspect the local geology without having to don a space suit. 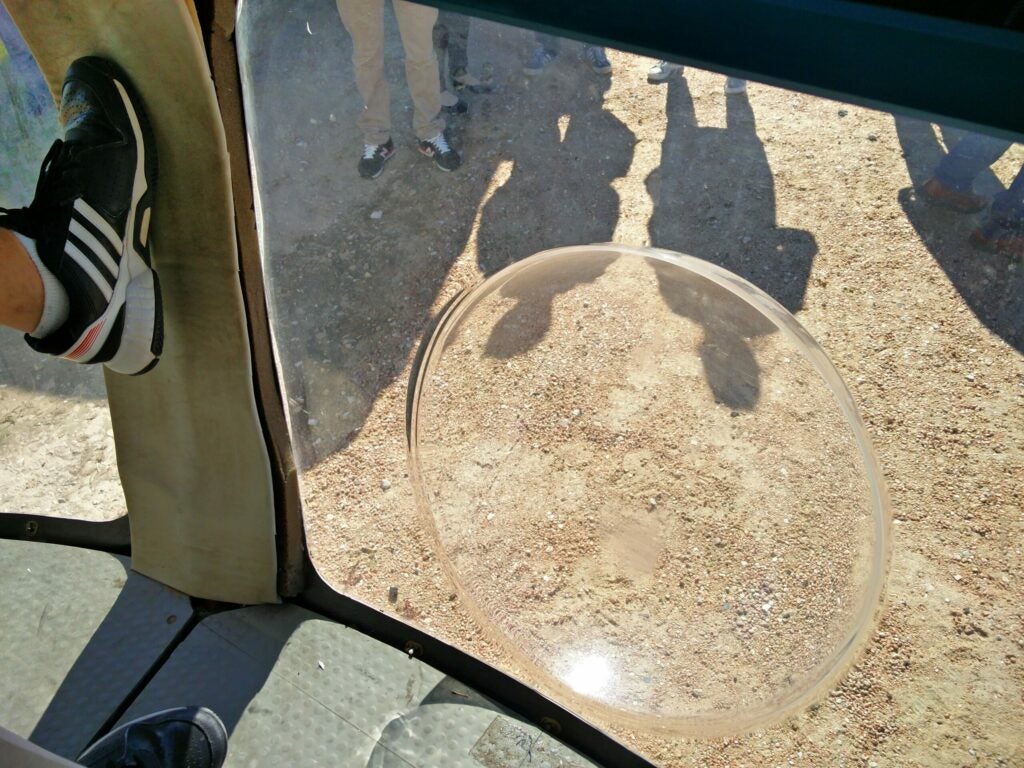 And speaking of space suits, you might have noticed the empty one that dangles off the back of the rover like a Halloween decoration. 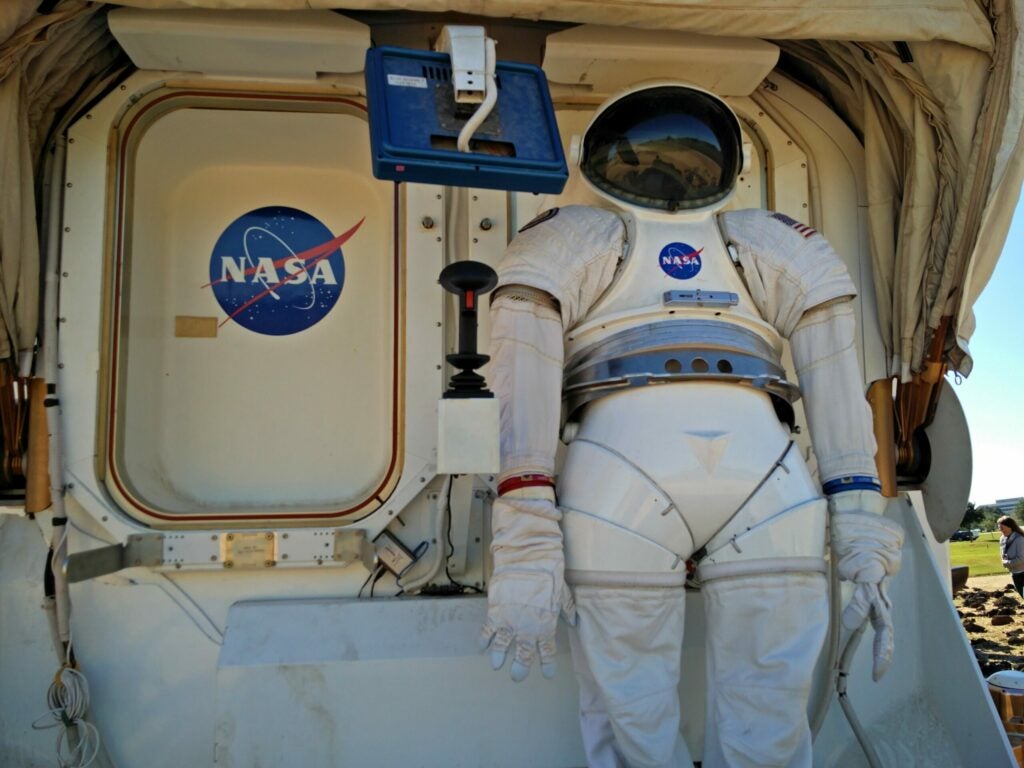 The SEV carries a space suit on its back-end

That suit is actually connected to the rover via an airlock, so astronauts can easily suit up to go outside. 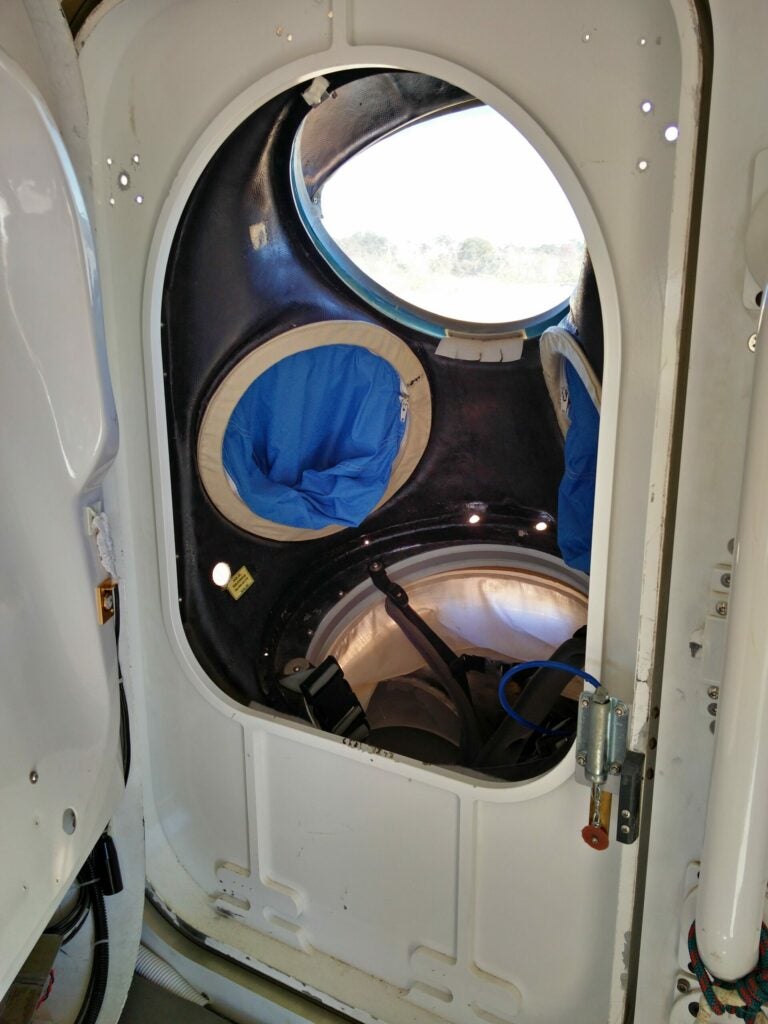 Astronauts who need to leave the vehicle can use this handy port to slip into a suit. An airlock closes behind the suit so that air and heat aren’t lost from the vehicle.

The next version of the rover will drive slightly faster, at about 12 miles an hour. That one will also be pressurized, with working airlocks to better simulate the airtight vessel that’ll be needed on Mars.