Astronauts could live inside ice domes on Mars

Home is where you hang your pressurized helmet 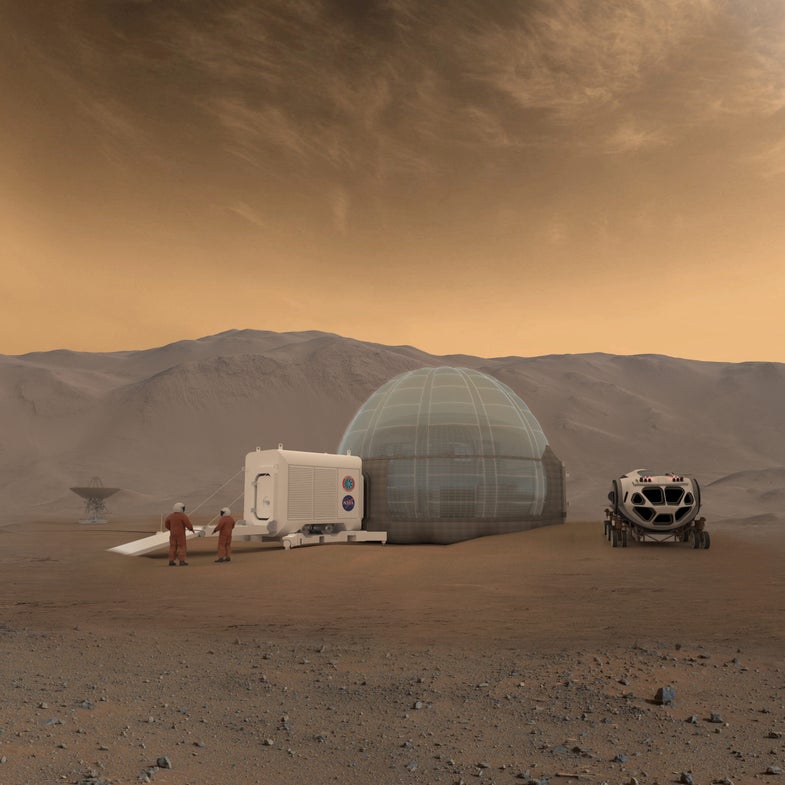 When you built a snow fort as a kid, you were unwittingly protecting yourself against more than ice monsters. You were building a radiation shield. On Earth, that doesn’t matter so much, but on Mars? It’s life or death.

The sun and other stars in the Milky Way produce high-energy particles that damage human bodies. Solar particles are mostly protons with low enough energy to be absorbed by basic physical structures. Galactic cosmic rays might sound like something out of a bad sci-fi movie, but they’re actually one of the most dangerous long-term threats to astronaut health. The small fraction of galactic cosmic rays that aren’t protons are heavy chemical elements moving at close to the speed of light. When they collide with a spacecraft, they break apart the atoms inside that material to produce showers of secondary radiation inside the craft.

The astronauts who will someday go to Mars will be bombarded by radiation from space. The Apollo astronauts who landed on the moon—the only people to travel outside of the Earth’s radiation-protective layer—got higher than normal exposure to radiation while on the surface. They weren’t outside for very long, so the effects were limited. It’s possible that those seven men had an increased risk for cardiovascular disease because of it, but that’s basically it.

Long-term exposure could be much worse. All that secondary radiation spells out cell and DNA damage, which means a higher risk for cancer and other diseases later in life. Acute radiation sickness could be a shorter term problem—high doses of radiation causes nausea, vomiting, and bleeding. So our future Mars explorers will need some kind of shield to protect them.

Ice is an unexpectedly excellent solution to this problem. Water has two atoms of hydrogen in every molecule, and hydrogen is particularly adept at blocking radiation. It only takes five centimeters (somewhere between the diameter of an Oreo and a soda can) to bring gamma and ultra-violet rays down to safe levels.

So teams at NASA’s Langley Research Center worked with Space Exploration Architecture and Clouds Architecture Office to devise a way to use ice as a shield. They came up with giant ice bubbles.

The Mars Ice Home is essentially an inflatable dome that can be filled with water—which will then freeze in the cold Martian air. That thick outer layer of ice would protect the interior from radiation, while a smaller dome inside would provide the actual living quarters. Since the outer dome is inflatable, and therefore compact and lightweight for the journey to the Red Planet, it can also be large. Living quarters don’t need to be gigantic, so the extra space inside the ice dome could act as an icy yard. Astronauts could service equipment in the yard without having to wear pressurized suits, for example, since they’d just need an oxygen mask to breathe. The Clouds Architecture Office pitches it as “an undefined open space for contemplation, relaxation, exercise, game play or anything the crew decides to do” in its original proposal. So perhaps someday we’ll be treated to pictures of contemplative astronauts playing low-gravity soccer in their ice yards.

The Ice Home also solves a couple other potential issues with Martian habitats. One of the biggest: how to get building materials to Mars. Right now it costs two to three thousand dollars to launch one pound of material into orbit, let alone all the way to another planet. The inflatable Ice Home uses lightweight materials and can be filled upon arrival. NASA thinks it could extract enough water from the Martian surface to fill the entire dome. But it would take an estimated 400 days, so some kind of automated assembly would have to take place before any astronauts arrived. Once they did, they’d be greeted by a fully-filled home. A layer of carbon dioxide trapped inside the dome could also provide insulation against the cold Martian climate.

Plus, it’s see-through. Most of the other materials that can block radiation are opaque, which makes any home you make from them very dark. It may just be an aesthetic difference, but if you were spending years (or possibly the rest of your life) on another planet you’d want a sunny home to live in too.