Talking To The Martians

A conversation with NASA and the creators of The Martian 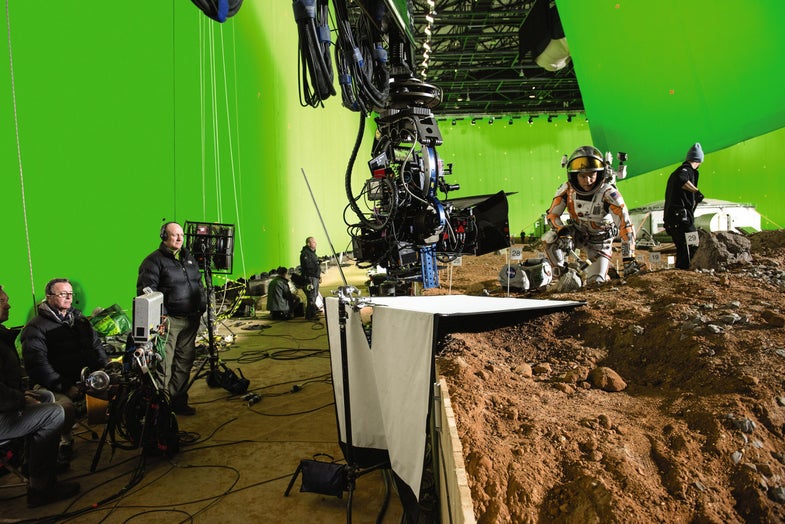 Shooting The Martian on a set in Budapest.
SHARE

Hollywood rarely makes movies like The Martian. It’s a big-budget science-fiction film that’s set in space but doesn’t feature aliens, robots, or warp drives. The only villain is Mars itself, and the character who gets stranded there is a botanist (played by Matt Damon). The Martian, which opens on October 2, is about survival through science.

To make that believable, director Ridley Scott strove to be accurate. We spoke with Scott and two consultants to his team–NASA’s Dave Lavery and Andy Weir, the author of the book that inspired the film–about how one goes about creating the next chapter in human space exploration.

What was it about The Martian that appealed to you?

SCOTT: I discovered really quietly that I’m a science-fiction fanatic. For many years after having directed Blade Runner, I kept missing it. That’s what made me climb back in with Prometheus. When the phone rang, I was reading Prometheus 2. With The Martian, I was fascinated by what NASA will have to do. You can’t just go to Mars and land and say, “OK, let’s build a house.” You’ve got to get all that stuff up there. In effect, the first astronauts will have to be house builders. And how do you get it there? Do you drop it to the surface in balls and bounce it?

LAVERY: That’s exactly the sort of thing we at NASA are constantly re-evaluating and redesigning as we prepare for the first human missions. Everything astronauts need to survive—from the atmospheric system to forks to eat with—will have to be provided. When you start wrapping your mind around that, you recognize it’s a huge problem.

SCOTT: I guess spending billions to get a few plumbers up there is not very romantic, is it? You better have the water running before you get up there.

LAVERY: Our current thinking is to have the habitat placed and in operation before the astronauts ever leave Earth. Andy gets that right.

Is it challenging to remain scientifically accurate?

WEIR: It’s hard to tell a compelling story and remain true to science, especially if you’re talking about the real space program. Frankly, NASA’s whole job is to keep exciting things from happening—to make sure there’s not a panicked, “Oh my god we’re gonna die” situation. It’s more like: “OK, well, this thing broke. That’s why we have four independent backups.”

SCOTT: The book has so much research on how to survive anywhere. That was really the lifeblood of the story and the screenplay—the idea that this guy is Robinson Crusoe, as I saw it. How does he pull himself together when he gets stranded? It’s intriguing to think about what you would do in that situation, given what’s at your fingertips. It’s all there to survive, provided you don’t panic. Gradually the nuts and bolts come together through the mind of Mark Watney [Damon’s character].

WEIR: Drew [Goddard, the screenwriter] and I went back and forth a lot on the screenplay. I really appreciate how close you guys stayed to it. I was surprised.

SCOTT: We also talked to NASA quite often. Our production designer visited and saw stuff like the new suits. I don’t like your suits, by the way, dude. Jesus Christ, the puffiness. I think you’re going to like our suits much better [laughs].

LAVERY: We have an ongoing program to try to understand what Mars suits will be like. One thing we realized a long time ago is that the Apollo-generation suits just are not suitable for a Martian environment. We’re doing whatever we can to make the suits smaller and lighter, more flexible, more comfortable. The Apollo suits, for what we had at the time, were wonderful. But they are not going to work over weeks or months for long-term exploration.

SCOTT: I love the big white suits. We use those at the end. They’re spectacular.

How realistic is The Martian?

LAVERY: One of the things that impressed me in the book is the effort to be technically accurate—correct about what resources are available, how problems would get solved. Even small details about the other spacecraft, like what might be available to scavenge and repurpose. It’s obvious that a lot of research went into it. And I was happy to see that same treatment in the script. I was contacted several different times by Ridley’s crew about, for example, what the Sojourner rover actually looked like. Where would things be positioned?

SCOTT: We reproduced the Sojourner and its mate. The thing is so beautiful. Why not just reproduce it?

LAVERY: The very first Mars mission that I worked on as a flight project was the Sojourner rover.

LAVERY: To be able to go back and talk about that and what it actually had on board was a lot of fun.

WEIR: The two biggest inaccuracies in the book were: One, the inertia of a Martian sandstorm isn’t large enough to cause damage to anything. And two, I do only a sort of hand-wavy lip service to radiation protection. I just vaguely say, “Oh yeah, all this stuff is shielded from radiation.” But that’s actually a huge problem in real life, and there’s no easy solution.

Were some details sacrificed for the sake of story?

SCOTT: I have him wrapping his radioactive generator in space foil like a giant Christmas present.

WEIR: [Laughs] That’s awesome. I kept getting these questions filtered to me through a bunch of people, where Ridley was saying, “Hey, wait a minute, a dust storm on Mars would not cause this kind of damage.” And I was like, “Yeah, you’re right.” I had an alternate beginning in mind for the book that I ditched because it wasn’t as exciting. It was an engine-test failure. I told Drew I could write that up with all the technical details. And he was like: “No, everybody is happy with the sandstorm. It looks really cool.”

SCOTT: The storm is massive. We won’t be reshooting that.

How do you think people will perceive space exploration after watching the movie?

LAVERY: I’ve been thinking about that quite a bit. The idea that this could be one of those go-to films that help people understand the realities of space exploration—in the same way, for example, Apollo 13 did—is an exciting prospect. The book and the film also tell the human story, and that’s important. The way the characters react and deal with enormous technical problems is very accurate. I do have one question, related to that, for Andy. I was absolutely fascinated by the idea that Watney’s skill centered on his role as a botanist. And I’m curious, as you developed the idea, did you start with, “Hey, I’ve got a botanist on Mars; how does he survive?” Or did you start with, “I’ve got a whole bunch of problems, and the perfect guy to solve them is a botanist?”

“I think the movie will reinforce the idea that this is something achievable.”

WEIR: The latter. If you’re going to be on Mars for a long time, there’s no way to survive without growing food. And rather than try to convince the reader that a pilot could successfully grow a bunch of crops in an adverse environment, I thought, “Oh, I can say his scientific role is a botanist, and then no one will question anything plant-related he does from then on, right?”

SCOTT: We did an experiment to see how you might really grow food on Mars so we could show it as accurately as possible. We were growing spuds in a warehouse under lights like you’d grow marijuana [laughs].

LAVERY: I think the movie will reinforce the idea that this is something achievable. People will get an appreciation for what the astronaut experience is like. But I think even beyond that, people are also going to have a newfound respect for botanists.

Would you ever go to Mars?

SCOTT: I love the Earth too much. And I think the endless journey would get me down. Astronauts have to be perfectly balanced psychologically. I tip my hat to them.

WEIR: Science fiction and popular culture have dramatically undersold the complexity of getting humans to Mars. People think: It’ll be harder than the Apollo program but, c’mon, leaving Earth and going to another place, how hard can it be? Well, many, many orders of magnitude harder. That takes a level of bravery that is well beyond anything I would be willing to do.

LAVERY: I would actually want to go to Mars, with one big caveat: I would want to make damn sure that I get to come back [laughs]. I’m not interested in a one-way trip. But if I can come back, yeah, I would do it in a heartbeat.

This article was originally published in the October 2015 issue of Popular Science under the title “Let’s Talk About Martians.” 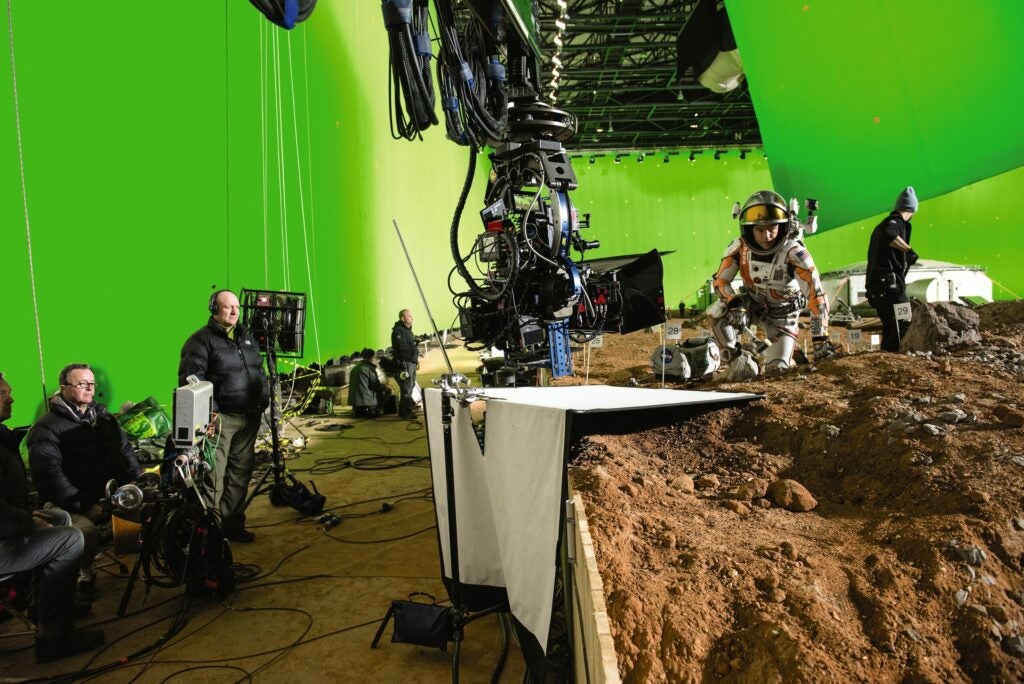