We Took A Virtual Walk On The Martian Surface

NASA has a grand new simulation 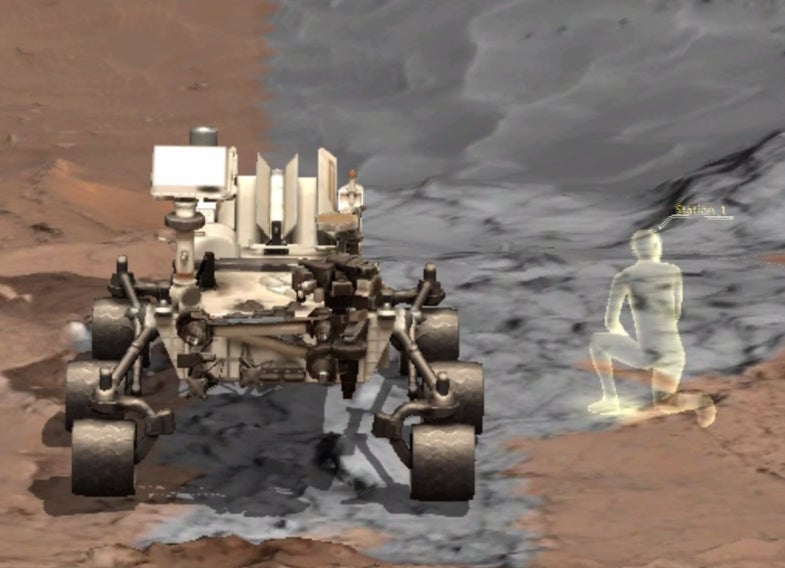 The Martian vistas in front of me are crisp and gorgeous. The rusty rocks remind me of the hot Arizona desert. I kneel down to examine the vibrant formations around my feet. I can imagine how the sharp edges have been smoothed out over billions of years of Martian wind. Each rock is coated with a fine gray dust, and, though the surface is chilly, looks bright and warm, as though bathed in heat from the Sun.

When world-renowned scientists offer to take you on a day trip to Mars — and promise you that you won’t die — your answer should be yes. This week, at NASA’s Jet Propulsion Laboratory in Pasadena, California, I strapped on a brand new science tool, called OnSight. I could breathe and walk around, and all without the burden of a bulky spacesuit and the pesky 8-month flight.

JPL teamed up with Microsoft, makers of HoloLens, to create a highly accurate way of exploring the red planet without having to actually travel to Mars.

Lead developer Alex Menzies explains, “The goal is to enable scientists to explore Mars just like they would explore a site here on Earth.” The OnSight system uses holographic processing to combine visual information from the Mars Reconnaissance Orbiter and high-resolution ground data from Curiosity’s multiple cameras so the viewer is seeing a realistic 3D view.

Not Just For Tourists

Dr. Fred Calef III, the Curiosity mission’s famed Keeper of the Maps, puts the headset on a few times each week to create detailed maps of the surface as well as assist with operations planning. “We spend a lot of time staring at 2D images and trying to figure out what the 3D is,” Calef explains. “We’re always asking, how big is that rock? How far away is it? I’m able to gather that data, but I end up using two different tools and switching views constantly. This allows us to pull it all together.”

The OnSight system also enables planetary scientists and other Martian geologists to collaborate in the HoloLens mixed reality world in real time. “We have a lot of scientists that work on the mission and they don’t all work at JPL. We have some as close as UCLA and as far away as France,” says Calef. “We do a lot of collaboration in our normal Mars operations, sharing images from orbit, images from the rover, but they’re often really flat or very distorted. The HoloLens experience allows us to see rocks where they currently are.”

The programmers at JPL didn’t just stop at Mars. Another piece of VR software, called ProtoSpace, turns 3D spacecraft designs into interactive holograms. Right now JPL is designing the next iteration of the Mars 2020 rover. The engineers use this tool to virtually take apart the rover, crawl underneath, and move the design around. Eventually they will use 3D models like this one for all designs.

This summer at Kennedy Space Center, NASA will use the OnSight technology to offer the public a virtual tour of Gale Crater, the 96-mile-wide impact crater where the Curiosity rover landed. The show, called Destination Mars, will feature a hologram of Apollo astronaut Buzz Aldrin, and Mars rover driver Erisa Hines.

Even when humans land on Mars, no one will ever run their bare fingers along the landscape like I did this week. OnSight may be the only way.