What’s It Like To Go To Mars And Back?

Mars500 crew members, in their own words 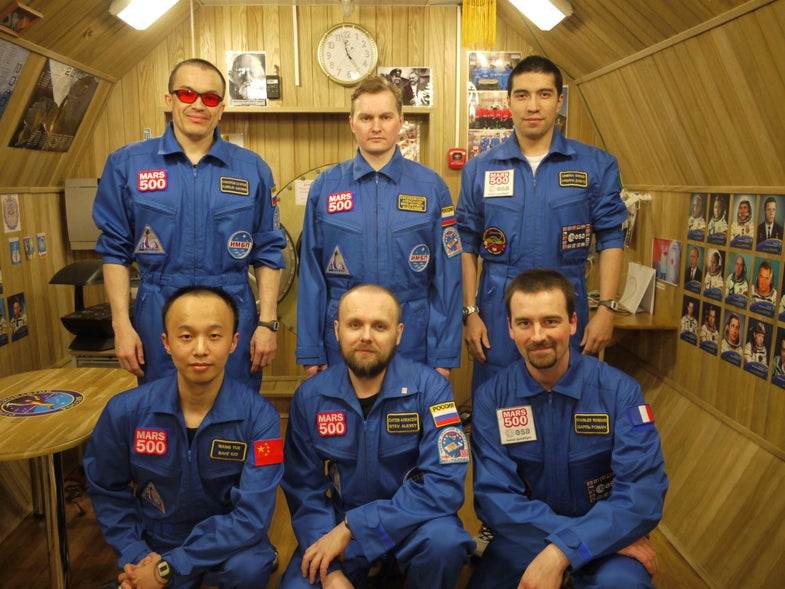 Imagine being trapped in your house for a year and a half. The only people you get to see are your five roommates. All of your meals come out of a can or microwavable pouch. You have no internet access, and your communications with the outside world are limited.

Such was the experience of the Mars500 crew–a team of 6 pseudo-astronauts who spent 520 days inside an isolation facility in Moscow as part of an experiment exploring the psychosocial challenges of a journey to Mars and back. The experiment finished in 2011, and hundreds of studies have analyzed the results of the longest spaceflight simulation in history. Now researchers from the Czech Republic have published a new analysis.

To learn more about the crew’s experience of extreme isolation, the researchers interviewed each member 12 days after the experiment ended. “We asked the participants to think about their time spent on the project as a ‘story’, to divide the story into chapters, give names to the chapters and briefly describe their content,” the study authors write.

The paper includes lots of direct quotes from the astronauts themselves. The crew members were from Russia, France, Italy, and China, so in the excerpts below, the English is a little choppy at times, and the speakers are not identified.

Here are some of the most enlightening takeaways from the interviews.

The crew members describe the first two to four months of the isolation experiment as an adjustment period. There was a lot of work to do, but it was new, and by the sounds of things, spirits were high.

As daily activities became more routine, the newness of the experiment wore off and monotony set in.

At one point the scientists conducting the experiment subjected the crew to a 24+-hour “electrical outage” to see how they’d respond. Despite the inconvenience, the outage was at least a break in the monotony, an unscheduled action that demanded a response.

Birthdays and holidays took on extra importance in isolation. Crew members had to be creative to think up birthday presents with the limited materials on-hand, sometimes requesting Mission Control (MCC) to send over the birthday boy’s favorite movie or book.

Holidays also provided high points that interrupted the daily routines. With each crew member sharing his own cultural holidays and traditions with the others, the enthusiasm could be infectious.

Getting to “Mars” was the most exciting point for the pseudo astronauts. The crew was divided in half–three crew members stayed in the habitat (“in orbit”) to dock and undock the “lander” and to provide support to the ground team. The “Martian” crew spent 30 days isolated in a previously sealed “landing module”, performing a virtual Mars landing, driving a virtual Mars rover, and going on three simulated spacewalks.

Although this was one of the most stressful times for the Mars500 crew, it was also one of the most rewarding times. The crew proved that even after eight months of boredom and isolation, they could still perform their tasks.

If Mars was the highest point of the experiment, the simulated return trip was the lowest part. The paper authors describe it as a bad hangover.

When you’ve spoken to nobody but the same five people for months on end, email and video messages from the outside world become a lot more important. The Mars500 crew became extremely distressed when they thought their communications were being disrupted.

Communication problems “were taken personally by the crew and had a frustrating effect on them,” the authors note.

A lack of communication or slow communication factored into many of the crew members’ lowest points they experienced during the experiment.

While the crew’s access to information from the outside world was outside of their control, having such diverse roommates helped a lot, because they could get new information from each other as they shared their cultural viewpoints and traditions.

“The differences in cultures acted as a facilitator and sometimes even the main reason for communication,” the researchers note.

Mars is certainly not for the faint of heart. With NASA planning to send humans to the Red Planet in the 2030s, and private companies hoping to colonize even sooner, it’s good to know what our astronauts will be getting themselves into. The longest-ever human isolation experiment shows that we need to plan ahead to break up the monotony of spaceflight, that reliable communication is a must, and that a diverse crew can help.