The Lunar Rover: Designing and Unpacking a Car on the Moon

It wasn’t until after Apollo 11 landed on the Moon that NASA starting thinking seriously about giving astronauts some sort... 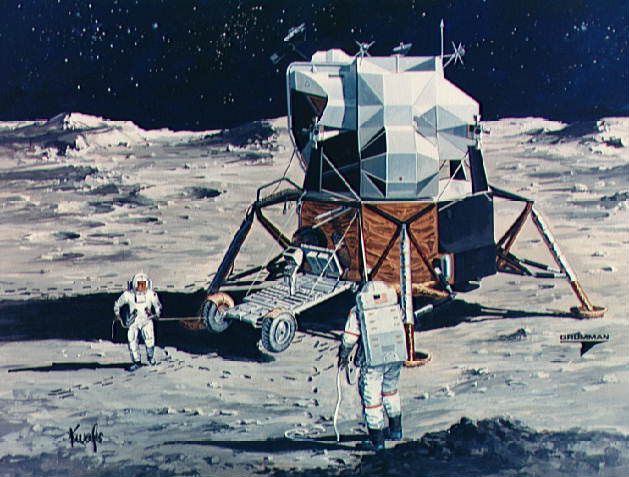 It wasn’t until after Apollo 11 landed on the Moon that NASA starting thinking seriously about giving astronauts some sort of surface mobility system, a vehicle that would allow them to cover more ground during their brief sojourns on the lunar surface. In early 1970, the space agency award Boeing a contract to develop and build such a system. And Boeing delivered. The company delivered the first flight ready lunar rover to NASA on March 15, 1971, just 17 months after winning the contract and two weeks ahead of schedule. This rover flew on Apollo 15, and while taking a car to the Moon might seem insane, the rover’s simple and elegant design made it a worthwhile addition to the final three Apollo missions. 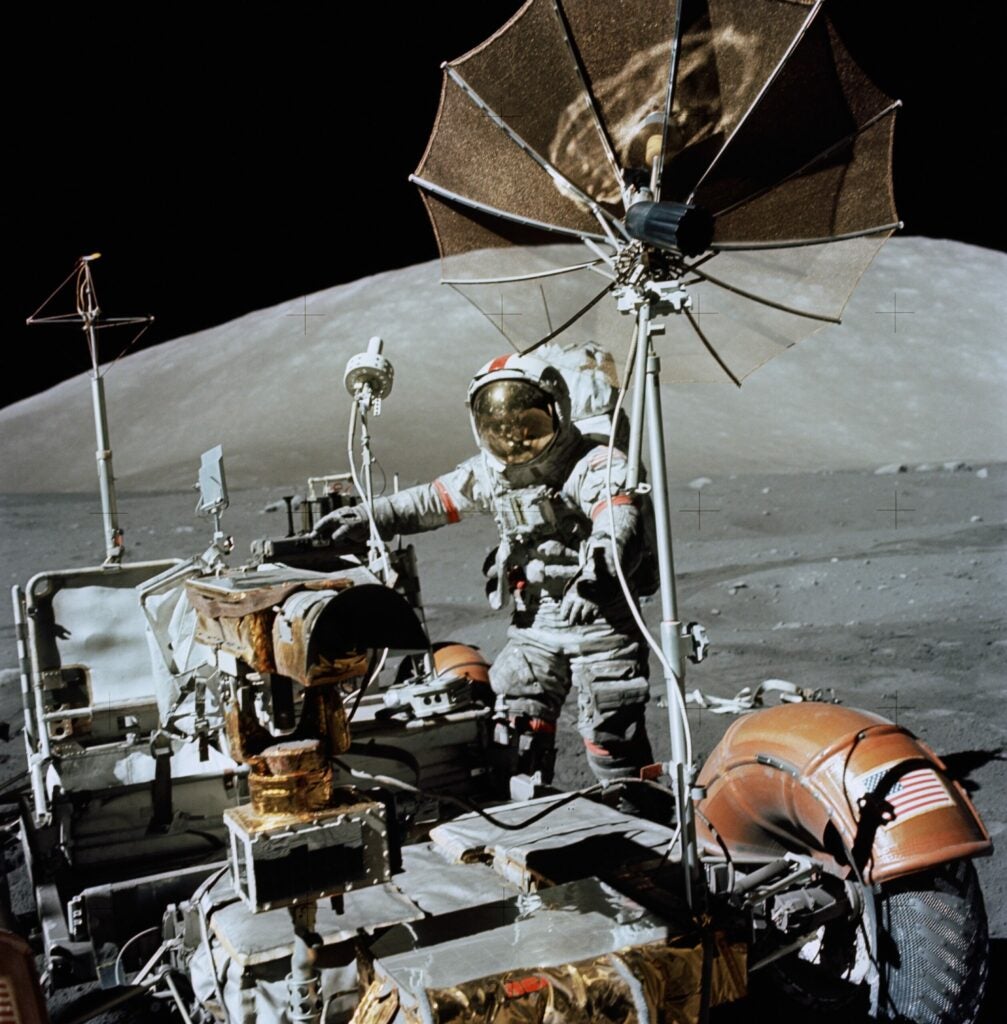 Forward-thinking engineers had been dreaming up ways to increase astronauts mobility on the lunar surface since the early 1960s. Some wanted to see full roving laboratories akin to mobile homes — designs like MOLAB — serve double duty as crew quarters and traveling workspace on lunar missions. Others favoured worm- and centipede-inspired vehicles that would distribute their weight across a larger surface area to avoid sinking into the dust. Still other proposals imagined flying platforms that would give astronauts a bird’s eye view of the lunar terrain as they traveled from place to place. There was even, briefly, serious interest in sending astronauts to the Moon with electric mini-bikes.

The reality was that a car-like vehicle was ideal. Stable on four wheels and flat, it could carry two astronauts and their life support systems and tools to interesting sites a fair distance from their landing site.

But the design constraints for the lunar rover were strict. As was the case with the Apollo program on the whole, weight was something NASA didn’t have a lot of wiggle room with. The rover would have to be light enough to launch with the Apollo payload as it was, but also be sturdy enough to traverse all types of terrains, conquer slopes up to 25 degrees, and function in temperatures ranging from -279 to 243 degrees Fahrenheit. And like everything designed for use on the Moon, it had to be something astronauts could unload and use easily wearing their bulky pressure suits.

The final rover that Boeing built met these strict specifications. It was an electrically propelled vehicle that weighed 480 pounds on Earth (80 pounds on the Moon), could carry about twice its own weight, and move at a top speed of about 8.6 miles per hour. Physically, it was an open design with two seats and a central control panel with a joystick that either astronaut could manipulate with a bulky glove on.

But designing it was only half the battle. The rover would be useless if engineers couldn’t figure a way to get it down to and ready to drive on the lunar surface. 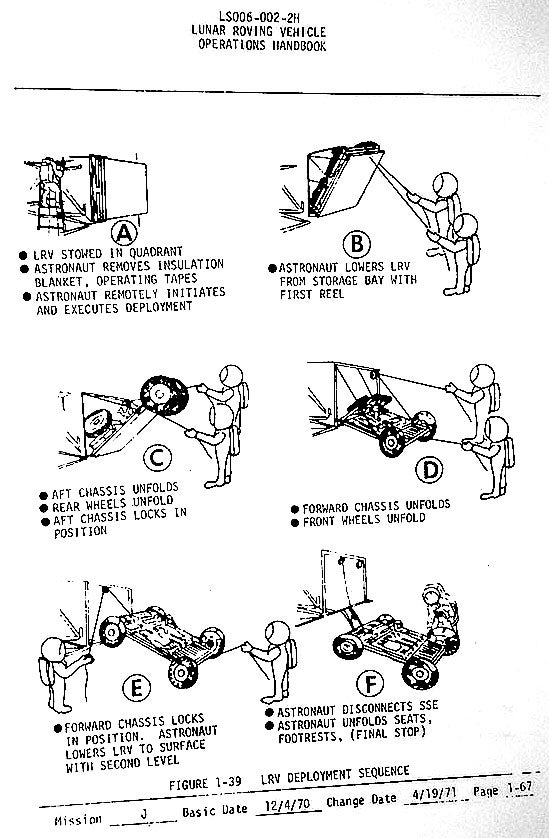 The steps to deploy your lunar rover.

**Getting the Rover to the Moon **

Luckily, the Apollo lunar module had enough storage space on board to carry a folded lunar rover. With its wheels folded in and its forward and rear chassis (or frame) folded over its middle section, the rover fit snugly into the LM descent stage’s quadrant 1, one of four storage units on the lower portion of the spacecraft.

The folded rover was anchored to the LM at one upper central strut on the lander’s body and to two points on its lower portion. Keeping it in this stowed position was a system of cables, shock absorbers, pin retract mechanisms, telescoping tubes, push—off rods, and a handful of other minor gears all designed so one astronaut could unpack the vehicle alone.

Deployment started with a single mylar cable attached to the rover’s aft chassis. One astronaut pulled this tape end over end to start the sequence then handed it off to his moonwalking companion to keep tension on the cord. Next, the first astronaut climbed up the lunar module’s ladder to pull a D-ring that released the rover’s upper restraint. This let the rover to fall about five inches away from its stowed position. It couldn’t go any further; two cables kept it in place.

Stuck in this half-released position, the first astronaut then walked around to the rover’s other side to pull a second mylar cable. This tape lowered the rover slowly to the surface. It also released two support cables that in turn triggered a push-off tube that moved the rover’s centre of gravity outward away from the lunar module. As it descended, release pins on the chassis pulled out to allow the base of the vehicle to unfold. Then the wheels sprung into place automatically thanks to torsion bars.

The astronaut continued pulling this mylar tape until all four wheels touched the surface and the support cables went slack. Another mylar tape on the other side of the rover brought the vehicle the rest of the way to the surface while telescoping tubes made sure it came to rest safely away from the lunar module. The cables and tubes released once their job was done. The rover was on the surface. 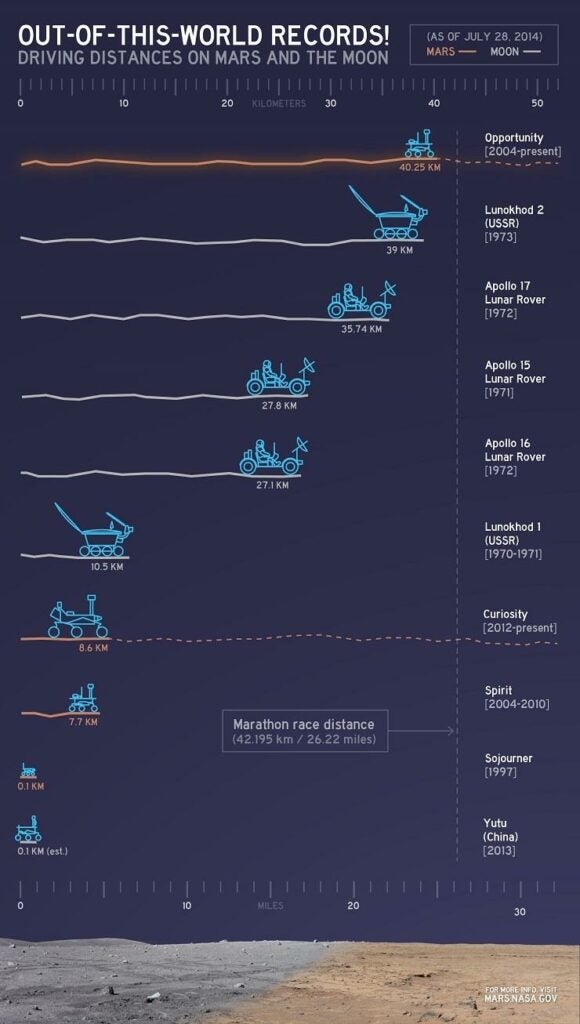 How the Apollo lunar rovers stack up against other offworld rovers.

Success on the Surface

With the rover unpacked, the astronauts had to set up the vehicle before they could take it for a drive. They deployed fender extensions over each wheel, inserted toeholds, deployed handholds and footrests, set up the control and display console, unfolded the seats and released the seatbelts, and finally discarded all the now unnecessary locking pins and latches.

The lunar rover turned out to be well worth the rapid development schedule. On the first three lunar landing missions — Apollo 11, Apollo 12, and Apollo 14 — astronauts covered a total combined distance of 4.4 miles. With a rover, Apollo 15 more than tripled that distance covering a total of 17 miles. Apollo 16 covered slightly less ground, just 16.8 miles. The final lunar Apollo mission, Apollo 17, that got the most out of its rover. In December of 1972, Gene Cernan and Jack Schmitt traveled 4.5 miles from their landing site, which was further than any other crew had gone, covered a total distance on the surface of 22.2 miles, and reached a top speed of about 11.5 miles per hour.

The variety of sites Apollo astronatus were able to visit with the luanr rover gave us far more scientific return from these missions than we would have been able to gather otherwise, deepening our understanding of the lunar environment and the Moon’s evolution. These missions also gave us incredible footage that continues to make Earth-bound drivers extremely jealous.