NASA’s next mission will either grab part of a comet, or bop around one of Saturn’s moons 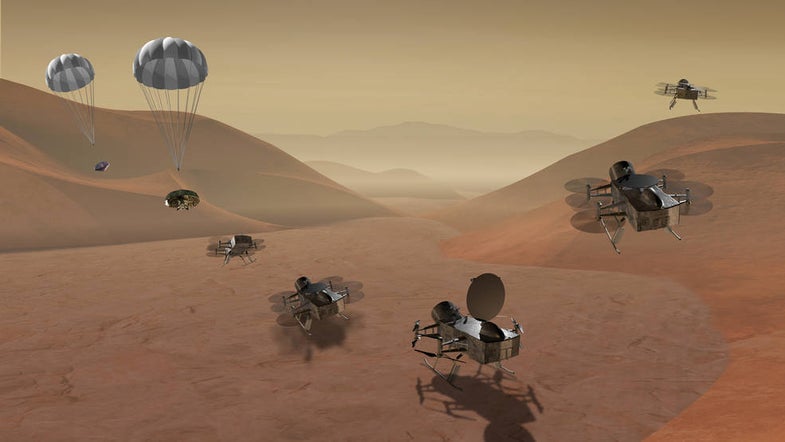 Which new frontier will we head towards? On Wednesday, NASA narrowed that choice down to two with an announcement proclaiming that their next New Frontiers mission would either play tag with the comet 67P/Churyumov–Gerasimenko or hopscotch around Saturn’s moon, Titan.

New Frontiers missions are mid-range missions intended to explore our solar system. They each have a budget that is capped at roughly one billion dollars. For comparison, the cost of the Curiosity Rover and the upcoming Mars 2020 rover each cost over two billion dollars. Previous New Frontiers missions have taken us out to Pluto (New Horizons), Jupiter (Juno), and one of them (OSIRIS-REx) is careening towards an asteroid. Now it’s almost time to add another mission to the list. NASA asked for contenders that fit one of six themes, including returning a sample from either a comet or the Moon’s south pole, probing Saturn, exploring Venus, rendezvousing with a Trojan Astroid, or heading out to the ocean worlds Titan and/or Enceladus.

The mission to 67P/Churyumov–Gerasimenko is called the Comet Astrobiology Exploration Sample Return (CAESAR). It’s similar to the recently-launched OSIRIS-REx mission, which is venturing off to collect a sample from the Asteroid Bennu. CAESAR would pick up about 100 grams of material from the surface of the comet, and then send the samples speeding back to Earth for scientists to analyze.

The potential mission to Titan is called Dragonfly, and sounds incredibly cool. It acts like a rover, taking measurements along the ground, but would then also be able to fly to different spots on the moon’s surface, potentially flying hundreds of miles from its initial landing site in the course of a 2 year mission. For comparison, the Mars Rover Opportunity has traveled about 27 miles in 13 years.

If both 67P/Churyumov–Gerasimenko and Titan sound really familiar to you, don’t worry, you’re not crazy. Humanity has sent representatives to both before. In the case of 67P/Churyumov–Gerasimenko, the European spacecraft Rosetta and its lander Philae visited starting in 2014. Titan had a visit from the Huygens probe in January of 2005 as part of the Cassini mission.

Boldly going where someone has already gone before might not seem as exciting as venturing into a new and exciting world. But when we discover something new and interesting, it’s often worth going back to take another look.

With Titan, its a chance to get an up-close and long-term look at a moon that has the potential ingredients for life. With CAESAR, visiting a comet that’s already been mapped means that this mission has a higher chance of success than if they were flying towards an unknown comet.

But, as with any contest, with congratulations comes condolences. While the news means that we’ll have another shot at Titan or 67P/Churyumov–Gerasimenko, it also means the Venus fans will have to wait, yet again for another mission to our intriguing neighbor.

Not all hope is lost for those holding out for a Venus mission. Two missions that were not selected for this round of New Frontiers funding were given smaller amounts of money to develop technology for future mission competitions. One of them, the Venus In situ Composition Investigations (VICI), is intended to study rocks on Venus’ notoriously harsh environment. The other, Enceladus Life Signatures and Habitability (ELSAH), was going to look for signs of life on Enceladus. The money allows them the opportunity to continue to plan their project so that if they want to resubmit the idea, their pitch can be more viable.

Both Dragonfly and CAESAR now have another year to study their mission concepts and flesh them out more, analyzing risks, tightening proposals, and refining technology. They’ll present their results to NASA in January of 2019, and then by July 2019 we’ll know whether we’ll be lauding CAESAR or chasing Dragonfly.