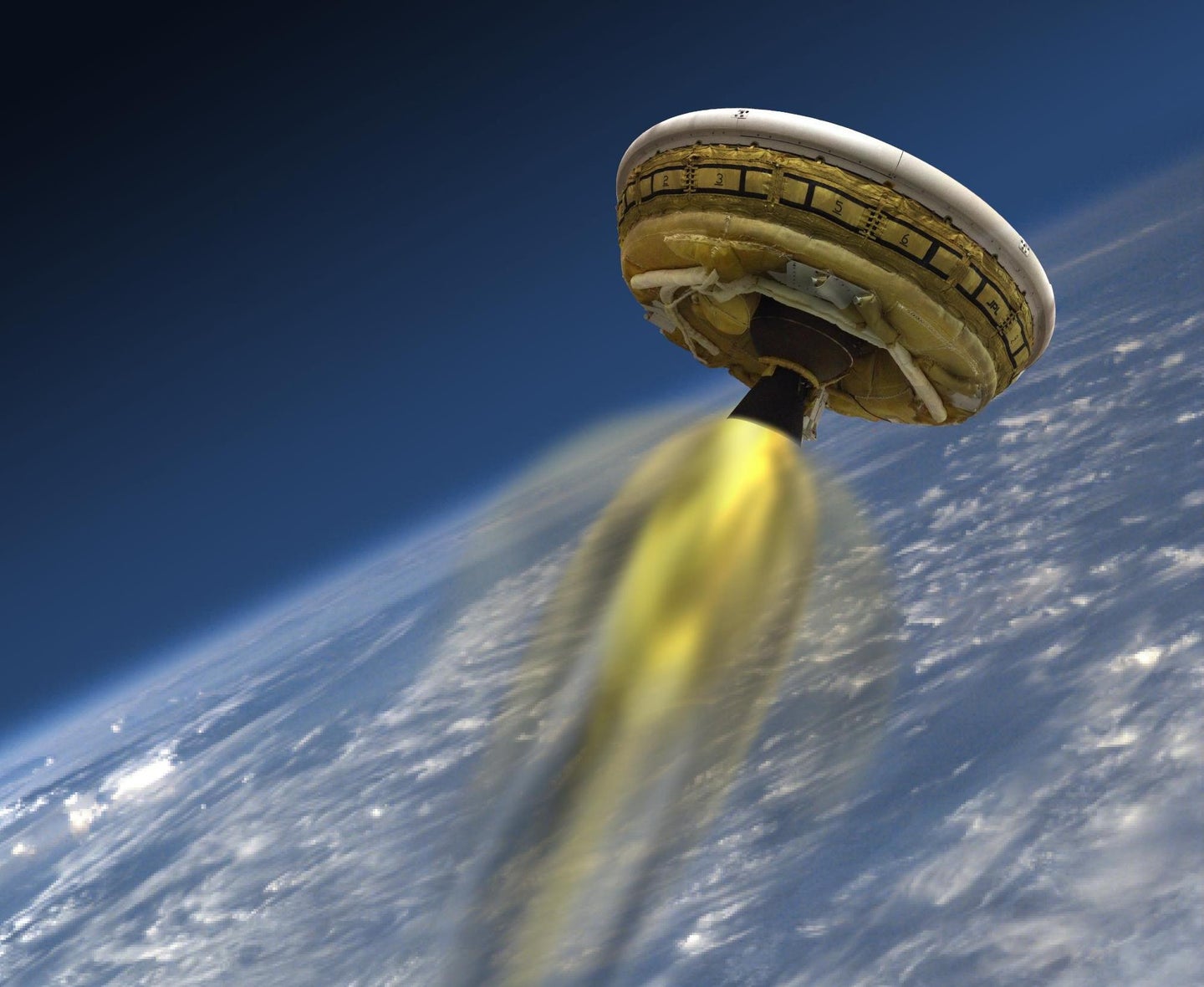 Update 5:45 p.m. EDT 6/8/15: A collective groan echoed throughout the LDSD mission control as flight controllers watched the flying saucer’s supersonic parachute shred during descent. The parachute deployed at first, but only partially, causing it to disintegrate mid-flight. Fortunately, all of the other systems performed as expected, including the initial weather balloon ascent and subsequent booster rocket fire. Plus, engineers equipped the LDSD with an on-board black box, so once the spacecraft is recovered in the ocean, NASA officials will use data gathered by that box to figure out what went wrong with the the parachute deployment and how to make the next iteration of the LDSD even better.

Update 6/8/15: Finally, today is the day! NASA’s LDSD is all ready for its scheduled “launch” at 1 p.m. EDT. According to the space agency’s blog, the weather balloon that will be taking the LDSD up to the edge of space is starting to inflate. Check back here to watch a livestream of the test:

Update 6/4/15: Alas, another weather delay has pushed back the launch:

Today, after several days of weather delays, NASA is going to see what it would be like to land a giant flying saucer on Mars by launching an experimental spacecraft here on Earth: the Low Density Supersonic Decelerator (LDSD).

The space agency will use a giant weather balloon to carry the LDSD to an altitude of 120,000 feet above Hawaii. There, a rocket booster will shoot the disc up even farther to 180,000 feet, getting it up to supersonic speeds. That’s about how fast a lander will be traveling during a descent to Mars.

As it’s traveling three times the speed of sound, the LDSD’s balloon will inflate and start slowing it down. Its supersonic parachute will then deploy, slowing the vehicle down even more until it gently lands in the Pacific Ocean. The parachute didn’t work as well as expected during their spacecraft’s first test mission, so NASA scientists are hoping for a better result this time around.

The entire test is a big dress rehearsal for a future visit to the Red Planet by humans. Landing on Mars is going to be a tricky endeavor. The planet’s atmosphere is very thin, making it difficult to gently place any interplanetary astronauts on its surface.

Currently, most landers rely on a combination of drag from Earth’s atmosphere and parachutes to slow down vehicles returning from space, but there’s just not enough air resistance surrounding Mars to stop heavy landers from slamming into the ground.

NASA’s solution to this problem is the LDSD. The oddly shaped craft, whose design recalls the UFOs of sci-fi lore, is designed around decreasing aerodynamic efficiency. Along with an inflatable balloon wrapped around the vehicle’s edge, the LDSD’s shape is aimed at increasing surface area and producing as much drag as possible during descent. Then, a combination of drogue parachutes will deploy, slowing the vehicle down even further—hopefully allowing astronauts to get down to Mars in one piece.

But as NASA must do with all its new space toys, they’ve got numerous tests to run first, including today’s big event.