If humans ever move to the moon, we’ll need a steady supply of the two most basic elements for life:... 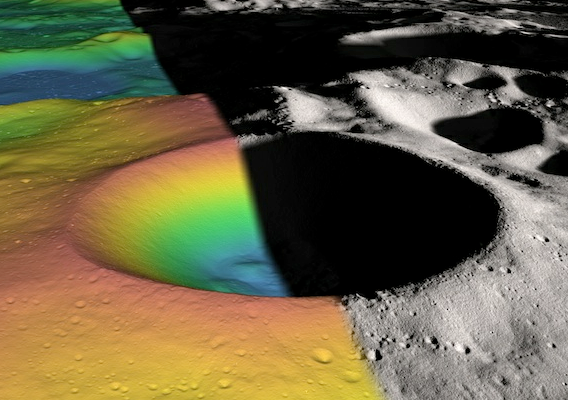 If humans ever move to the moon, we’ll need a steady supply of the two most basic elements for life: Sunlight and water. The lunar poles have long been prime candidates for settlement, because they’re exposed to sunlight almost all the time and because for at least three years now, scientists have known they contain water. One particular promising crater just had its water content freshly measured, and there’s plenty of ice.

The Shackleton crater, named for the Antarctic explorer Ernest Shackleton, is right near the moon’s south pole and is half-shadowed all the time. It is super reflective, especially relative to other craters nearby, which could indicate the presence of lots of ice. Moon mapper extraordinaire Maria Zuber and her colleagues checked this with the Lunar Reconnaissance Orbiter. The team measured the crater’s albedo with a laser altimeter on board LRO, and found ice may constitute about 22 percent of the surface material. But it’s only a micron-thick layer in the 2-mile-deep crater. That’s almost as deep as Earth’s oceans.

The team also found that while the crater’s surface is bright, its walls are even brighter, which was at first surprising. Any ice couldn’t survive on those walls because it would sublimate into space the moment it was exposed to sunlight. But it turns out it may not be ice after all, but brighter lunar soil. Small moonquakes could cause some of the crater walls to slough off darker lunar regolith and expose fresh soil underneath, according to NASA. Zuber said the newer soil and the ice on the floor could both explain the crater’s unusual brightness. Other than the occasional wall-shaking, the crater is remarkably pristine, having changed very little since its formation 3 billion years ago.

Nailing down Shackleton’s ice content is just one more piece in the ongoing puzzle over lunar water supplies. To really determine how much water is locked up in the moon’s permanently shadowed regions, NASA will have to send a lander. Results like this could help decide where to send it. The paper appears this week in Nature.