A 29-year Gap in their space knowledge 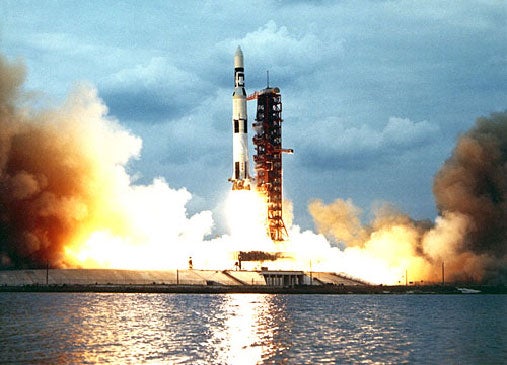 1969 was a year of space exploration, rock and roll, and most notably, the founding of The Gap clothing store. As part of an ad campaign for its “1969” line of jeans, The Gap has been touting its heritage, placing jeans next to other things that happened in 1969. If you’re nerds like us, the Apollo 11 mission tops the list of that year’s highlights.

The Gap thought so too, honoring the launch of the first lunar landing by placing a historical space launch next to some quality denim.

However, that’s not the Saturn V rocket used on 1969’s Apollo 11 mission. It’s a Space Shuttle. The first Shuttle launch wasn’t until Columbia in 1981. The Saturn V was a modular rocket constructed like a single tower.

Our best guess for exactly which Shuttle appears in Gap’s ad is the ninth modification of the shuttle Discovery, which flew from 1998 until 2011. However, the graphic designer seems to have erased a few distinguishing marks that would make the confirmation of the model easier.

The biggest tell for distinguishing the rocket is the color of the wing panels, tiles that run near the rear of the wing. According to this incredibly handy guide to Space Shuttle markings made for hardcore Shuttle modelers, the wing panels were predominantly solid black until the eighth modification of Challenger in 1997.

The easiest way to narrow it down from there are the markings and logos on the wings. The eighth modification of Discovery and the second modification of Endeavor both have NASA logos where the US flag is located in the photo. That brings us to four remaining contenders.

Here’s where we get nitpicky. Those shuttle markings and logos that we noted earlier actually appear to leave their own markings on the wing when removed—except for some reason on Discovery. Each iteration of Atlantis, Endeavor, and Columbia have visible yellow discoloration of the panels surrounding the logos, at the base of the wings. Also, Columbia doesn’t have these same markings on its elevons, which all the other shuttles share.

The only thing that is still a mystery is the separation of windows in the cockpit. No image or schematic that we were able to find showed a shuttle with those same markings. From what we could tell, the black tiles that makes the individual windows of the shuttle’s control center were for some reason doctored by the graphic designer. (And if you have a better idea as to why, let us know.)

Then again, Gap could have just done it right in the first place.