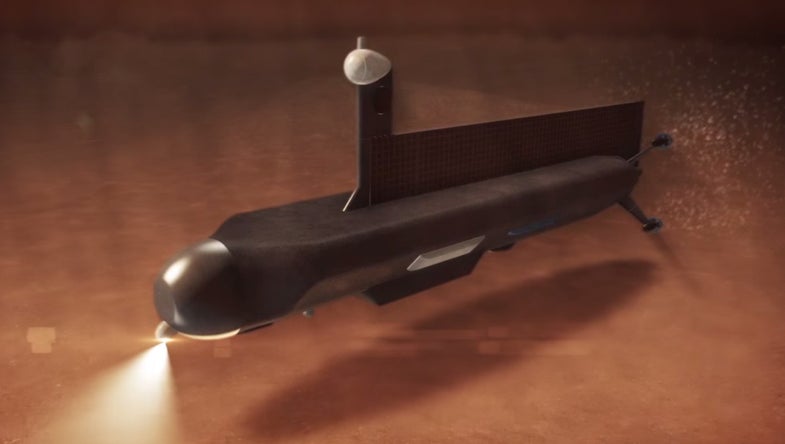 There are places beyond the reach of NASA’s current army of robot space explorers. Impressive and capable as Curiosity and other land rovers are, they’d be pretty useless in the liquid hydrocarbon lakes of Saturn’s moon Titan. That’s a shame, because Titan is one of the likelier candidates for housing life in our solar system. A new NASA concept wants to dive into the seas of Titan: it’s a nuclear powered space submarine that would look for signs of alien life.

The submarine is designed for Titan’s largest sea, which has the unbelievably metal name of Kraken Mare. The concept submarine has a familiar, submersible cylindrical shape, broken by four small propellers at the bottom and a giant rectangular slab jutting out of the top. This slab would be an antenna, allowing the submersible to transmit data all the way back to Earth. To work in Titan’s nitrogen-rich atmosphere and likely ethane-rich seas, the submarine would use a piston system instead of ballast tanks. Fueling it all? A nuclear power generator. Fed by plutonium-238, the sub’s Advanced Stirling Radioisotope Generator would be long-lasting and powerful.

Should such a submarine ever go to Titan, it will need a different landing approach than the pods and parachutes that accompany terrestrial robots. Lead designer Ralph Lorenz proposes putting the submersible inside a spaceplane like the Air Force’s secretive X-37B. The X-37B’s cargo hold can fit the proposed submarine, and it’s lifting body could land on the water, allowing a smooth deployment for the extraplanetary underwater explorer. The proposal is vague on how the X-37B itself would get to Titan.

Once in the water, the submarine would use a periscope-like camera to map the shorelines of Kraken Mare. Other sensors would sample the liquids of the sea and the sediments of the seafloor, looking for organic components, while sonar could map out the bottom of the ocean.

The team behind the submarine doesn’t expect a landing until 2040 at best. If the submarine does eventually explore the depths of Titan and find life, here’s hoping it’s okay with humans sending a nuclear-powered submarine to say ‘hello.’