It warps and flares at the edges. 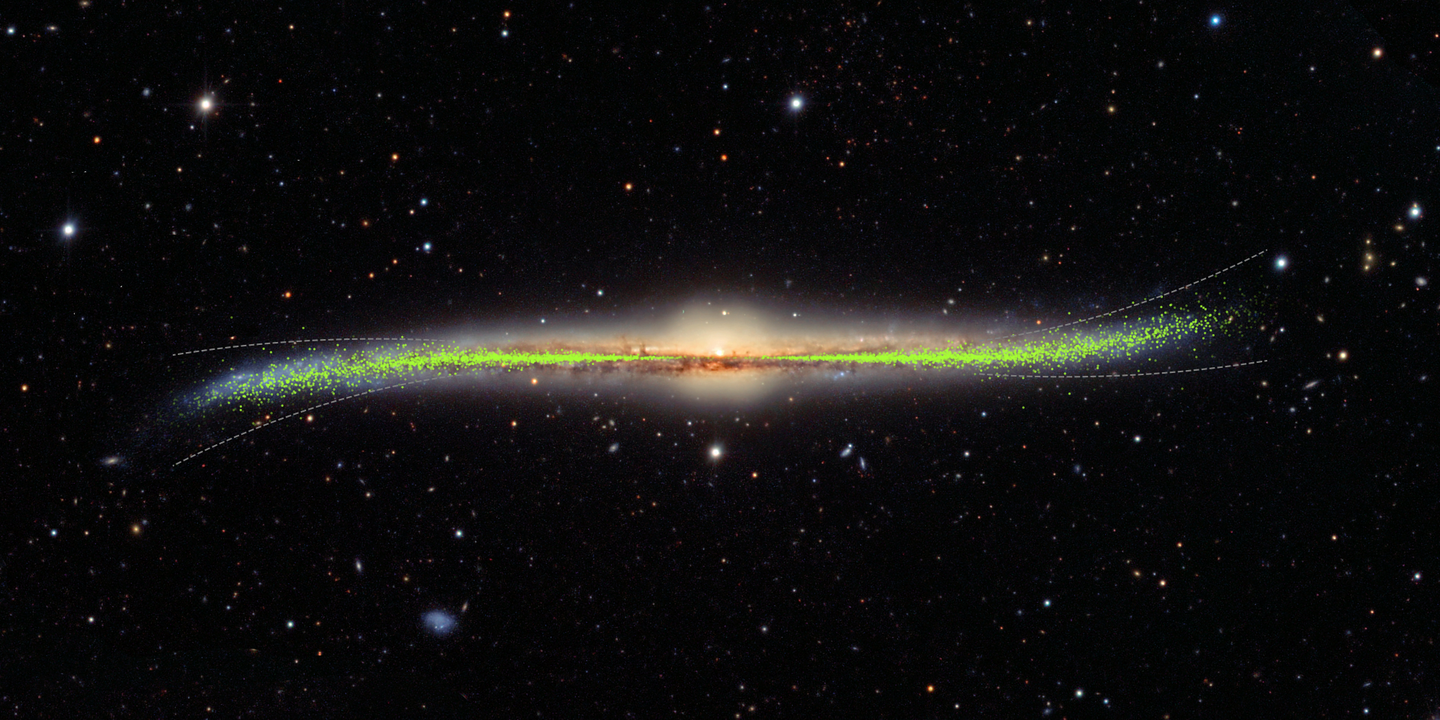 When ancient stargazers looked up at the Milky Way, some saw spilt milk or a river flowing across the sky. Others saw a trail of hay, or a flock of birds. No one spotted the pinwheel.

It’s hard to resolve a swirly, complex disk when you’re stuck inside, looking horizontally either in toward the center or out toward the edge. To make matters worse, bright stars far away resemble dimmer ones up close, blinding astronomers to any sense of depth. That the universe lacks obvious mile-markers is one of the central curses of astronomy.

But researchers love a challenge, and after years of toil a Polish team has released the most complete map of our galaxy to date. They didn’t try to plot all its hundreds of billions of stars. Rather, they set their sights on something a bit more subtle—the Milky Way’s bends, bulges, and bunches. The result, published today in Science, supplies the best measurements yet of a strange warping in our cosmic neighborhood, and will serve as a target for those trying to better understand how the galaxy got its current physique.

“We hope that our paper will be a very good starting point for more sophisticated modeling of the galaxy’s past,” says Dorota Skowron, an astronomer at Warsaw University. “Our [stars] are a great testbed for checking the reliability of such models.

Skowron and her collaborators surveyed the galaxy by looking for special beacons: Classical Cepheid variables are huge young stars, thousands of times brighter but just a tenth the age of our sun, and they pulsate over the course of days to months. Astronomers know that the more slowly a Cepheid flashes, the brighter it burns—a relationship they can use to calculate distance by comparing the actual brightness with how bright the star appears from Earth.

But before they could plot the galaxy’s Cepheids—and, by extension, the curves of the galaxy itself—the team had to find them. The astronomers scoured the southern skies from the Las Campanas Observatory in Chile, snapping hundreds of thousands of photos and scrutinizing more than a billion stars, watching for the regular dimming and brightening that would betray a Cepheid’s position. In the end, combining their haul with Cepheids known from previous surveys, the team was able to plot the exact locations of 2,400 stars (1,000 more than a concurrent study) on a 3D galactic map.

“The breakthrough moment was certainly when we saw the first plot of our Cepheids on top of the typical galaxy picture and we noticed the wealth of structures,” Skowron recalls. “This took six years, but it was worth it.”

One such structure? The Milky Way’s disk buckles like a melting Dalí clock. Astronomers first noticed this warping, where one side curls a few thousand light years “up” and the other a similar amount “down,” in the 1950s, but a fuzzy understanding of its exact shape has kept theorists from pinpointing its ultimate cause. The new map’s unprecedented accuracy may help rule out some of the current options, which range from the gravitational tug of satellite galaxies to intergalactic magnetic fields.

The map sets a new bar for anyone trying to explain how the Milky Way came to be. The team noticed, for instance, that Cepheids of certain ages tend to congregate, and that younger groups are more compact than the older groups—an indication that the Milky Way has undergone waves of star making. Astronomers still don’t know exactly how many spiral arms there are and how tightly they wind, how stars navigate the galaxy’s warp, or what might set off bursts of star formation. Future theories will have to produce something similar to the new map.

Other researchers welcome the chance to dig into the galaxy’s past. “Mapping the structure of the Milky Way is the basis for several fields of research in astronomy,” says Eloisa Poggio, an astronomer who studies the galaxy’s warp at the University of Turin in Italy and was not involved in the research. “It is strongly related to the formation history of our galaxy. Therefore, it’s important to have 3D maps based on precise distance measurements.”

Future observations will continue to clarify the picture the Warsaw team has assembled. Skowron estimates that a similar project in the northern hemisphere could spot another 1,500 or so undiscovered Cepheids. Additional infrared observations of the galactic center would also cut through the dust between stars, which is the map’s major source of error: it obscures a star’s observed brightness, throwing off the distance estimate. And expanding the census to search for an older variety of pulsating star, known as RR Lyrae, would add a fourth dimension to the map by including more ancient swaths of the galaxy.

People may no longer imagine the Milky Way as a creamy stream flowing across the sky, but there’s still a lot we don’t understand about our corner of the cosmos. “Getting to know our place in the universe is always interesting,” Skowron says.