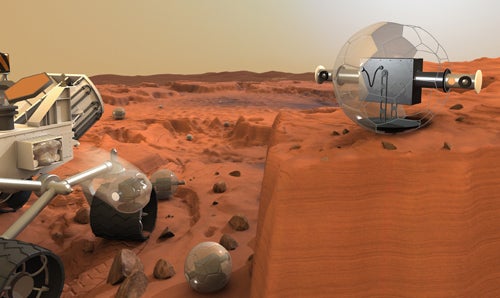 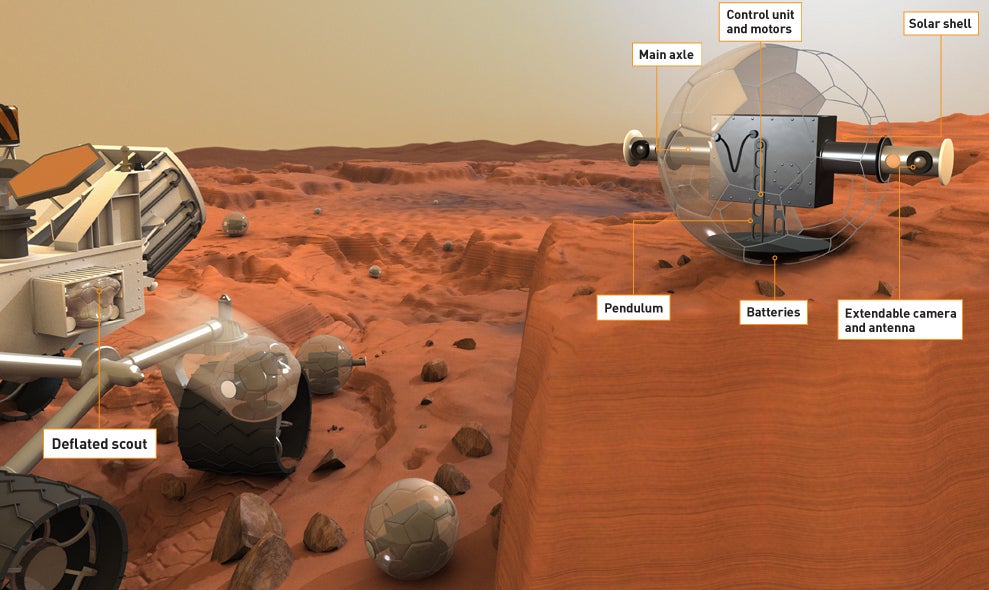 Rolling Over the Red Planet

By next fall, NASA plans to launch its biggest Red Planet rover yet, the $1.8-billion, SUV-size Mars Research Laboratory. Even though the MRL will be able to haul five times as much equipment as the Spirit and Opportunity rovers that are already on Mars, a group of Swedish researchers say that they could accomplish far more if accompanied by a squad of helper ‘bots. Fredrik Bruhn, the CEO of Ångström Aerospace Corporation, and his colleagues have designed the small inflatable scouts to assist bigger, less mobile rovers in their hunt for signs of microbial life on Mars.

Each foot-wide, 11-pound ball can roll up to 62 miles, snap photos at any angle, and take soil samples, drawing its power from the solar panels on its shell. Unlike wheeled rovers, the rounded scouts have fewer motors to repair, never flip over, and are easier to seal from dust. Plus, they rarely get stuck. “The beauty of the system is it needs very little energy to go around rocks, so unless you’re landing on a surface that looks like a bed of nails, it should be fine,” Bruhn says.

In 2004, Bruhn helped found Swedish company Rotundus, whose Earth-based GroundBot is now test-patrolling a harbor in Stockholm. By using GroundBot’s pendulum-propulsion mechanism, swapping in a radiation-proof computer, and designing a lightweight, inflatable shell, he thinks he could produce four of the Mars balls for as little as $6 million. “We just need to assemble the bits and pieces and test it,” says Bruhn, who shows his design to NASA officials this month.