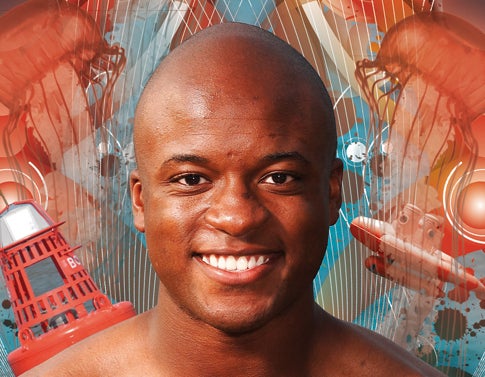 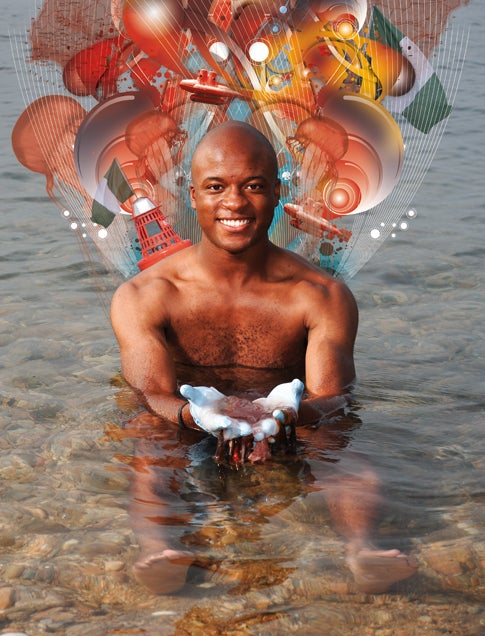 It’s just after sunset in Long Beach, California, and John Dabiri stands on the end of a wooden dock, peering down at the water. In his white sneakers and striped polo shirt, Dabiri might be just another boater checking out a well-known local spectacle: a pulsing mass of hundreds of softball-size moon jellyfish that regularly gather here.

It’s the green laser lighting up the water that gives him away. Just beneath the surface, one of his graduate students records the motion of a single jellyfish with a custom-built, high-definition video camera and a water-particle-illuminating laser. Every so often, she hands it up to the biomechanics professor for an adjustment, then sinks down again to record the pumping of another jelly. The measurements will be fed into software programs that reveal the intricacies of how jellyfish push off their own wake — a doughnut-shaped whirl of water known as a vortex ring — and thus use less energy to propel themselves forward.

Already, Dabiri’s findings are inspiring design improvements in data-collecting buoys, military submarines, even onshore windmills. Which isn’t to say that the Navy’s next fleet of deep-sea vehicles will be soft and bulbous. “What we’re trying to do is not just mimic what we see in nature but to extract the relevant design features — like the vortex rings,” Dabiri explains. “In nature you have evolution, with its own set of constraints. We don’t have those constraints as engineers. We can start with something like a jellyfish and take advantage of the fact that we have propellers and steel to build things that look nothing like it but perform as well or even better.”

It was only 11 years ago that Dabiri boarded a bus from Toledo, Ohio, bound for his first semester at Princeton. The son of Nigerian immigrants — his father is a math teacher, his mother a software developer — Dabiri always imagined he would go into the auto industry. But by his junior year, he’d developed a fascination with fluid mechanics and was offered a prestigious summer fellowship at the California Institute of Technology. Dabiri had already lined up an internship at Ford Motor Company, but at the urging of a professor he backed out and got on a flight (his first ever) to California, where he was soon camped out in front of an aquarium tank, studying the boneless, brainless jellyfish.

It wasn’t what Dabiri had pictured. He hadn’t taken a biology class since 10th grade and never had much interest in marine life. Growing up in Toledo, he never even learned how to swim. But the summer project — which evolved into a co-authored paper on how lessons from jellyfish movement can help cardiologists track blood flow in the heart’s left ventricle to predict future problems — captivated his interest in the growing field of biomechanics.

The next year, Dabiri returned to Caltech as a graduate student. He completed his Ph.D. in four years and was offered a professorship there after preemptive offers by Princeton and Illinois. He was 24.

Since then, Dabiri has taken his research from the lab to the open ocean. Together with his graduate students, he developed technology, like the laser-imaging system, to make real-world observations possible. (The next step is a camera that films the jellies in 3-D.) And he’s become convinced that many of our next mechanical innovations will have their roots in the natural world. “We’re just starting to see connections between biology and engineering and technology,” he says. “When you suspend reality for a second and think about animals as machines, you realize that your equations don’t care whether you’re looking at a 747 or a jellyfish.”