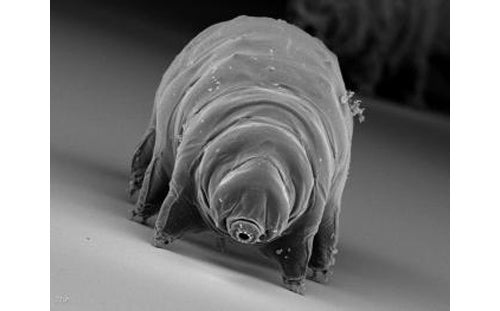 In space, no one can hear a tardigrade scream. They can, however see the tiny organisms (also called water bears) survive a trip through that icy, radiation filled void relatively unscathed.

Researchers from Sweden and Germany assessed the little animals—segmented, six-legged and often less than a millimeter long—after the European Space Agency shot them into space with the FOTON-M3 mission in September 2007. The brave micro-astronauts returned to earth ten days later, where scientists experimented with reviving them after their exposure to vacuums, oxygen deprivation and bombardment by ultraviolet and other radiation. The results of tests on the critters were just published in the journal Current Biology, around a year after the launch and mission.

The tardigrades (and their eggs) were divided into three sets—one which experienced only the space vacuum, one made to suffer through the vacuum and UV A and B radiation, and one exposed to space and the full UV spectrum. All the samples were also exposed to ionizing solar radiation and cosmic rays. Tardigrades are particularly hardy here on earth, managing to make it through the most extreme drops in temperature and moisture we see, so they were a predictable pick for this type of experiment. In the end, almost all were able to survive the vacuum of space alone, while two-thirds of the sample exposed to only UV A and B were revived after 30 minutes, though most of those ended up eventually dying. Only a single specimen survived exposure to full spectrum UV radiation.

So far, only lichens and bacteria have been able to withstand the combined assault of space and solar radiation, according to the report. Many tardigrades, the first animal ever to achieve this trip, did succumb to the experience. But remarkably, a number of individuals managed to live through a combination of space—which should dry-up and destroy DNA—and solar radiation, which should fry it. The researchers are not sure how exactly the water bears manage this survival, but the fact that they can opens up new avenues for research into the mechanisms that protect, and also repair their DNA. And the extremely exclusive club for space-proof life now includes an animal.