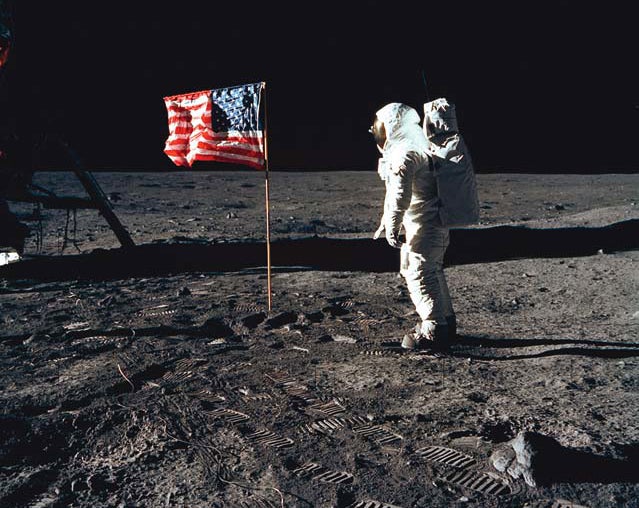 Snug in Earth’s orbit, Hubble is free from the background glare that earthly telescopes must fight to see the stars. This allows its supersensitive camera to take better photos of galaxies farther away—and thus much dimmer—than any optical telescope on the ground can. But despite being closer to the moon than any other telescope, there’s no way the scope could snap a photo of that one small step man took 40 years ago.

Considering the distance to the moon and the resolving power of Hubble’s eight-foot-wide main mirror, one pixel in the highest-resolution image that the scope can take of the moon would be about the size of a football field, says Hubble astronomer Frank Summers of the Space Telescope Science Institute.

To get the resolution to the point where one pixel was the size of a footprint, he says, Hubble would need a primary mirror roughly 2,400 feet in diameter. And if you wanted to make out the tread marks from Armstrong’s boots, that mirror would need to be nine miles wide. “The mirror sizes required are absurd,” Summers acknowledges.

But he does offer a potential solution. Precisely positioning several spacecraft several miles apart and training them at the same target can approximate, in effect, a miles-wide telescope. Using a computer to combine observations from each scope might reveal footprints around the abandoned lunar rover, Summers says, but NASA’s time would be better spent exploring the universe, not looking at dusty landmarks.

Burning question? Send it forth to the experts at fyi@popsci.com