What’s Happening to the Sun?

Could its unusual behavior herald a new ice age? 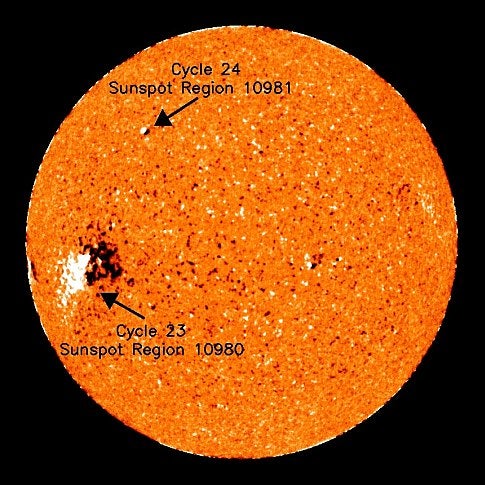 For about 50 years from roughly 1650 to 1700, the Sun took a break from its typical sunspot activity. That phase of solar rest coincided with what we now refer to as “The Little Ice Age” — a period of cooling on the Earth that resulted in bitterly cold winters, particularly in Europe and North America. Scientists attribute the Little Ice Age to two main causes: increased volcanic activity and reduced solar activity.

Could it happen again? And are we headed there now?

The term “solar activity” refers collectively to sunspots, solar flares, and solar eruptions. Together, these phenomena make up the “space weather” that alters interactions between Earth and its atmosphere, causing potential disruptions to satellites, communications systems, and power grids. Varying levels of solar activity also cause significant changes in atmospheric circulation patterns, which can affect the weather and climate on Earth.

Solar cycles, which last an average of 11 years, are driven by the number, size, and placement of sunspots — cooler, darker spots on the Sun’s surface where intense magnetic activity occurs — on the Sun’s surface. Each cycle is marked by a solar minimum and a solar maximum, meaning the approximate time in the cycle when the least and greatest amounts of solar activity occurred. During the solar minimum, sunspot activity diminishes, and during the maximum greater numbers of sunspots appear. As one cycle winds down and another begins, sunspots from both cycles can be seen simultaneously.

By late 2007, Solar Cycle 23, which began in 1996, was decaying to low activity levels, and NOAA forecasters predicted that Solar Cycle 24 would begin in March 2008, plus or minus six months. Indeed, the new cycle’s first sunspot appeared in January 2008 — its high-latitude location a clear sign that it was part of the new solar cycle. But in the months that followed, there was a marked decrease in sunspot activity, spawning questions about whether we could be headed into another little ice age.

“Everything we’re seeing now we’ve seen the Sun do before, and it still went on to produce a normal solar cycle,” said Doug Biesecker, physicist at NOAA’s Space Weather Prediction Center in Boulder, Colorado.

After a nine-month lull in solar activity, a batch of five sunspots appeared beginning on October 31, 2008, four of which belonged to the new cycle. And according to Biesecker, so far this year, two sunspots appeared for a total of four days — one was a Cycle 23 sunspot and one a Cycle 24. “You always get lots of days with no sunspots, and at solar minimum you almost always see sunspots from the new cycle at the same time you’re still seeing sunspots from the old cycle. This overlap phase can be just a few months, but it can be as long as two years,” he said.

Biesecker says that the longer Cycle 23 drags out, the more we will hear about how the Sun is going quiet. “If you go back to the early 1950s, that solar minimum was very similar to the one we’re going through right now,” he said. “But it was followed by the largest solar cycle on record. So just because the Sun is quieter than it’s been in awhile doesn’t really tell us where it’s going to be in the future.”

Tom Woods, Associate Director for Technical Divisions at the Laboratory for Atmospheric and Space Physics (LASP), concurs. “Typically during a solar minimum you will have one or two months with no sunspots, so what we saw in 2008 is typical of most solar cycles,” he said.

But Woods points out that there are other indications, aside from sunspot activity, that Cycle 24 may be different. First, the magnetic field at the Sun’s poles is about 40 percent lower than it normally is at solar minimum. “If you look at the last time the polar field was that weak, it goes back to the early 1800s during a time called the Dalton Minimum, when we had a low solar activity cycle,” he said. The Dalton Minimum lasted from about 1790 to 1830 and coincided with a period of lower-than-average global temperatures.

In addition, Woods says that the solar wind speed is currently lower than normal. But does this mean there will be a big change in the solar cycle? “We don’t really know, but we’re waiting and watching,” he said. “This new cycle could be anomalously low or it could be normal.”

Although Cycle 23’s 12-year length (it began in 1996) isn’t outside the normal range, it might help explain why Cycle 24’s activity level is low. Biesecker points out that, based on the previous 22 solar cycles, researchers now know that the longer the previous cycle, the lower the next cycle will be in terms of activity. “So we’re definitely edging into that territory now,” he said.

According to Woods, even a smaller solar cycle could induce some cooling on Earth. “Not enough to offset the greenhouse gas global warming effect,” he said, “but enough to potentially slow it down for a few years.” The solar cycle’s effect on global temperatures is only about 1/10 of a degree, whereas the greenhouse effect over the past 30 years has been about a full one degree change, Woods said.

Even so, Woods says it’s unlikely that we’re headed into a “Little Ice Age” scenario. “It’s probably unlikely that we will go into a phase where we don’t have any sunspot activity for 50 years. We can’t eliminate the possibility, but I would say the probability is not high,” he said.

“For that to happen, we would have to see no pickup in the Cycle 24 sunspots, but we’re seeing a reasonable amount of new activity,” said Biesecker. “There is no model we’re aware of that can predict that we’re going into an ice age — it’s an actual physical limitation of our current understanding.”