Further indicators of possible life on the red planet 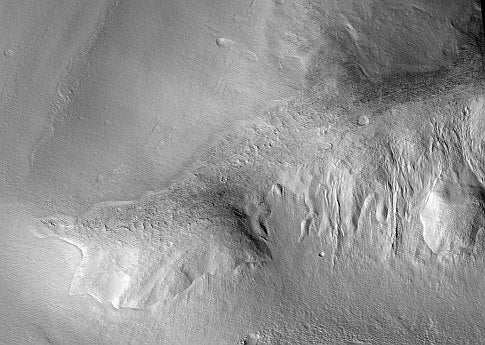 More than 30 years ago, images of the Martian surface taken by the Viking mission orbiters revealed unusual apron-shaped sloping areas at the base of taller geographical features. Researchers analyzing the Viking data puzzled over the features, called lobate debris aprons, which only occurred in the mid-latitude regions of Mars.

The shape of the debris aprons, and the fact that they only occurred in the temperate zone, caused researchers to speculate that they might contain large amounts of water ice. Now, thanks to dramatic improvements in remote sensing technology, that speculation has turned to near certainty.

Using data from the Shallow Radar (SHARAD) sounding instrument on the Mars Reconnaissance Orbiter, launched in 2005, a research team has found that the debris aprons are made up almost entirely of water ice. In fact, the researchers say, they may be remnants of large glaciers on Mars that have been protected by a layer of gravel and dust.

“As of last year, it was pretty well known that Mars had water ice both in the poles and also in the Arctic area down to about 60 degrees latitude,” said Jeffrey Plaut, geologist at NASA’s Jet Propulsion Laboratory and lead author of a report on the findings published in a recent issue of Geophysical Research Letters. “But what’s new, exciting, and different about these debris aprons is that they only occur in the mid-latitude regions of Mars.”

“Because we don’t expect water ice to be stable there now, the fact that we see these very large masses of water ice indicates that some previous conditions must have made it possible for the ice to accumulate — very thick piles of it,” he said.

Plaut and his seven co-authors believe those previous conditions included a wetter climate era on Mars, when large amounts of snow fell in the temperate regions and an ice age may have occurred at one time. “This had been hypothesized in the past, but what we have here is a smoking gun, and we actually are detecting the remnants of these ice sheets or glaciers,” said Plaut.

The debris aprons extend for tens of miles from the edges of mountains or cliffs and are up to one-half mile thick. “If you were walking in this terrain and you wanted to go from the base of one of these aprons to the top, you’d have to hike maybe five or ten miles, and you would go up in altitude about half a mile,” said Plaut. “That’s a lot of ice — it’s as big as large glaciers on the Earth.”

At one time, scientists thought the debris aprons were similar to what are known as rock glaciers on Earth, which are composed of large amounts of rock with some ice. “But what we’re seeing is a big pile of clean ice — it’s actually almost pure water ice with just a covering of soil and debris to protect it from the atmosphere,” Plaut said.

Plaut says the reason the apron features are preserved is because they are near steep terrain. On sloping features like crater rims or mountainsides, the process of mass wasting causes material to constantly slide downhill, and this material is what built up over time to create a protective covering over the ice. “If you go out into the Martian valleys or plains, there probably was once water ice there as well, but there was nothing to generate the soil layer on top to protect the ice, so that ice is gone now,” said Plaut.

Water ice reserves in the mid-latitudes is potentially good news for future human and robotic missions to Mars, because temperatures in these regions are not as extreme as in the polar regions. “If one of the requirements for a human mission to Mars is access to water, then this gives you a chance to get close without putting too much stress on your whole system,” said Plaut.

A wetter period on Mars also says something about a possible habitable environment, as far as where organisms may have been able to survive. Bacteria can lie dormant in dry, bitterly cold conditions for millions of years and then become re-activated when conditions become favorable to their existence. During these temporary intervals of liquid water, the soil environment could transform into a habitable environment for the microbes.

“When we talk about climate changing in these mid-latitudes, we’re talking about a cold and wet period — a snowy period,” said Plaut. “But there were probably very warm periods as well, when some of these ice deposits probably melted. So then you have liquid water, which is the key requirement for life on Earth.”