A rumor's going around that risk-taking linked to high testosterone levels caused the crash. Is there any truth to the claim? 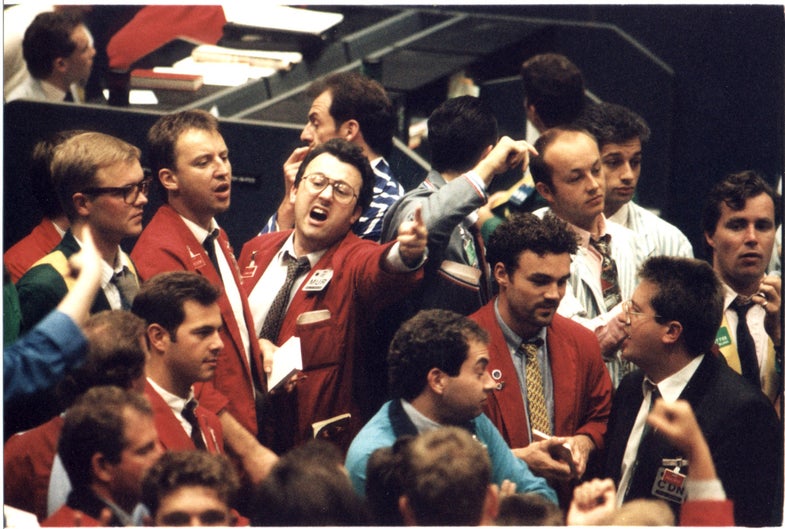 It was only a matter of time before pop-news outlets pounced on a biological explanation for the tidal wave of bad credit and risky decisions that has engulfed the U.S. this month: it was those dang men and their raging hormones!

The source of this meme is a just-published study in Evolution and Human Behavior in which ninety-eight young men—most of them Harvard students—were given $250 to either save or “invest” in a game of chance. The ones who took the most risk, the researchers found, were the ones with the highest levels of testosterone in their saliva. Risk-takers also had more masculine facial features, perhaps because square jaws and bigger cranial bones are thought to be a proxy for testosterone exposure during puberty.

I recently spoke to the lead co-authors of the paper, Coren Apicella of Harvard and Anna Dreber of Harvard and the Stockholm School of Economics, to ask about what sex hormones have to do with risk-taking in the first place, and whether skyrocketing testosterone really had an impact on world financial markets.

I’ve seen a bunch of headlines today and yesterday saying things like “Testosterone caused the financial crisis!” What, if any, connections would you draw here?

Apicella: Anna is the economist, so she could probably give you a little more insight on this market crisis, but I would say that’s media spin on the results that we found. But Herbert and Coates, two British researchers, published a study in May and made some interesting findings: male London traders on the floor actually made higher profits on days that their testosterone levels were above their median for the week.

Dreber: In today’s business environment, investment banks select for extremely risk-taking individuals. I’m sure that these men have higher testosterone levels. How much did this actually contribute to the crisis? We don’t know yet how much risk-taking in general contributed, but the insurance company AIG has more than 100,000 employees, and it was basically brought down by this small group of traders in London who were taking excessive risk there. They probably didn’t have a good model of uncertainty, so in fact they were taking all this risk without even realizing it. It’s likely that the guys over there had more testosterone than the average man.

Apicella: In a wide range of behaviors and traits, men show more variation than women. For instance, hunting is a risky sort of strategy—you might get the kill, but you might come up with nothing. But if you do get something, you’ll get quite a few calories. So these high-risk strategies could yield larger returns in terms of reproduction for men—they could have higher fitness payoff. A woman’s fitness is limited to her access to resources and how many children she can have in a lifetime. Men’s fitness is limited only by their access to different women, and one way for them to attract different women is by having a lot of resources—that is, money.

You found that men who had testosterone levels one standard deviation above the mean invest $17 more than average in a risky investment. But is this necessarily a bad thing?

Dreber: It can make sense to take risks. For example, we find that some women take too little risk for their own good, including on the stock market. They might think that it makes more sense to look at the expected value of an investment than the variance. And in our study, the high testosterone men didn’t take excessive risk . . . they took acceptable risk. But we could have designed a risk measure when it doesn’t really make sense to take risks, and we are planning on doing that in a later study.

Your study didn’t prove that high testosterone causes this kind of behavior, just that there’s an association. Do you think that a causal relationship will eventually emerge?

Apicella: Absolutely. In a future study, we plan to look at how financial wins and losses affect men’s testosterone levels, and how that in turn affects their confidence and future risk taking. It’s called the “winner-loser” effect: when sports teams win, the testosterone levels of the players and even of their fans rise relative to those of the losers. So we want to look at these differences in testosterone level and see whether the actual change in testosterone [caused by winning] predicts future risk-taking behavior. This should give us a better of idea of what exactly is mediating the relationship between risk and testosterone. Do these men just have more confidence? Are they just realistic, getting things right more often? We’re also working on a genetic association study—I can’t get into the results too much, but there might be certain genotypes in both men and women related to financial risk-taking.

Welcome to The Sex Files. Almost every publication worth its druthers has a sex column these days, full of Carrie Bradshawish musings about life and love, men and women, this and that. Here’s our take on the genre. Instead of faux-sociology, we’ll give you a broad view of new research and ideas in the sexiest of the hard sciences: reproductive biology, evolutionary anthropology, and genetics. This is sex from the inside out. Keep track of the column at popsci.com/sexfiles, where you can also sign up for an rss feed.