New satellite images may answer our questions about the Red Planet. Could humans one day live here? 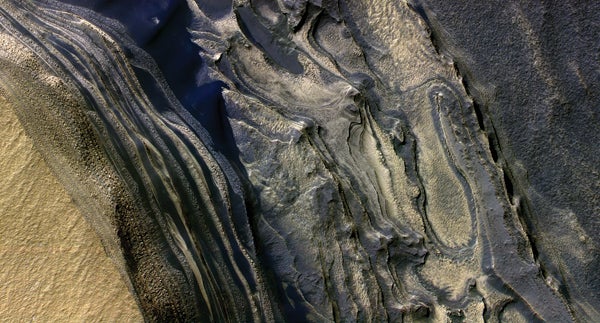 The HiRISE has uncovered a wealth of information in a canyon bank at Chasma Boreale at Mars's north pole. Here, the canyon has eroded to reveal layers of minerals and other materials. The layers are rich in water ice, while the dark material toward the bottom is most likely sand dunes. These layers are helping scientists decode Mars's recent climate variations. NASA, HiRISE/JPL/University of Arizona
SHARE

These detailed views of the red planet were transmitted to Earth by NASA’s Mars Reconnaissance Orbiter (MRO). After a 72-million-mile trek through space, the craft reached Mars in March 2006, delivering some of the most advanced technology ever sent to another world.

Equipped with six instruments, including cameras and radar, the orbiter is providing scientists with the most detailed look at Martian landscape yet. One of the cameras, the High Resolution Imaging Science Experiment (HiRISE), snaps extremely high-resolution images of the Martian surface, giving scientists a clear view of the terrain. By studying the geology and climate of Mars, scientists hope to determine whether life was ever present, and whether it might someday be possible for humans to inhabit the Red Planet.

** Launch the gallery here to see the remarkable images and what they’re teaching scientists about the prospect of life on Mars.**

The HiRISE has uncovered a wealth of information in a canyon bank at Chasma Boreale at Mars’s north pole. Here, the canyon has eroded to reveal layers of minerals and other materials. The layers are rich in water ice, while the dark material toward the bottom is most likely sand dunes. These layers are helping scientists decode Mars’s recent climate variations. 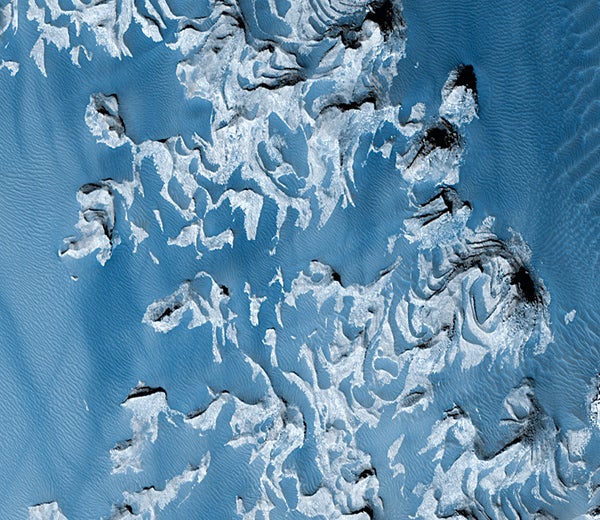 After the gradual collapse of this 3.7-mile-long area of plateaus, the remains settled as a large outcropping of mesas and layered rocks. Scientists have formulated many possible explanations for the different layers, including dust, sand, volcanic ash or lake deposits. The color variations in the image (sand is represented in blue) might indicate further erosion. Studying the material composition of the hills and knobs will aid scientists in determining the geological history of Mars, and help determine whether humans could ever settle atop such a jagged landscape. 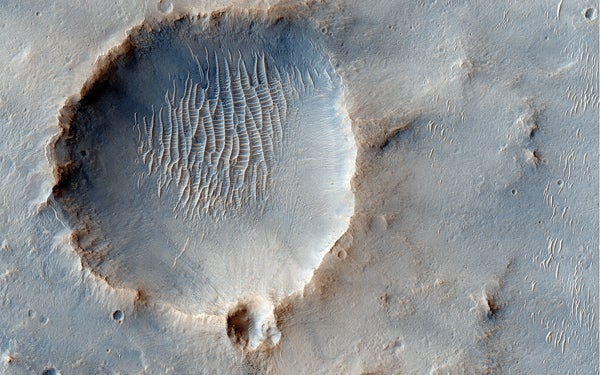 The Compact Reconnaissance Imaging Spectrometer for Mars (CRISM), which studies the mineral composition of Martian terrain, has unearthed clay minerals, or phyllosilicates, within the Miyamoto Crater, shown here. Scientists believe that these minerals may have formed in the presence of water. The Mars Science Laboratory, NASA’s next mission to Mars, might land at this 93-mile-diameter crater to further probe Mars’s composition. 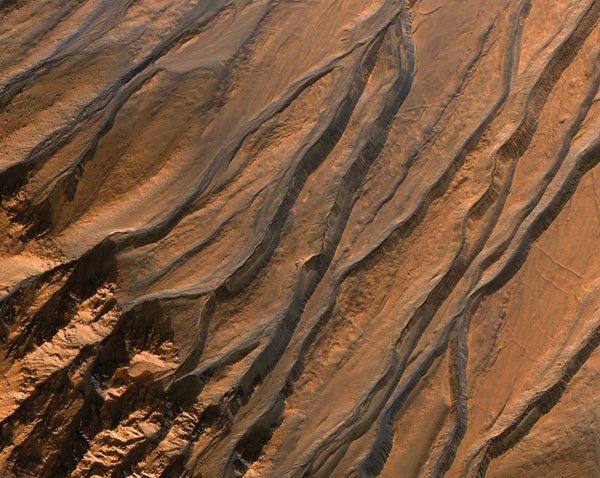 Gullies near Gorgonum Chaos, a region of jumbled valleys, cliffs and plains, contain powerful evidence that liquid of some sort may have once flowed on Mars. Because of their likeness to water-formed landscape features on Earth, the gullies point to the likely presence of liquid on Mars within the past few million years. 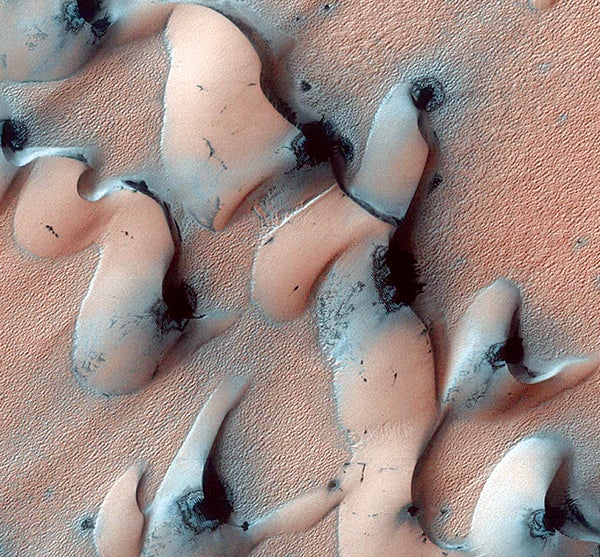 A region of dunes, shown in these three photos, lies near the northern polar ice cap. Each Martian winter, temperatures plummet to –225°F and polar ice caps made of solid carbon dioxide form. When spring arrives and temperatures rise to as high as 65°F, the ice cap evaporates without ever becoming liquid, a process called sublimation. The outlying crescent-shaped dunes [left], which were formed by wind blowing from south to north, defrost by the same process. 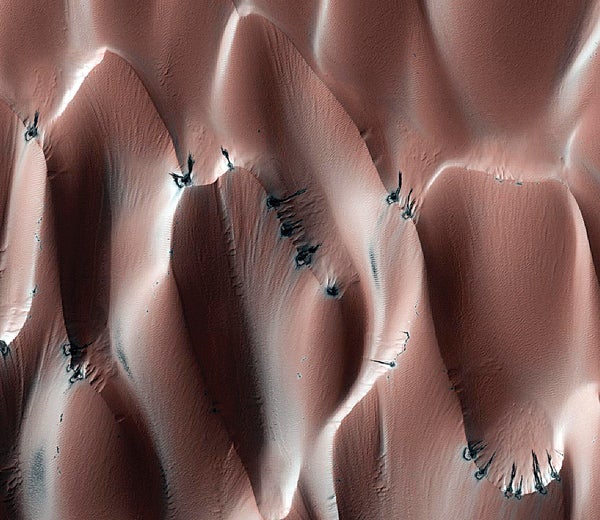 The dark spots on the dunes are where frost is subliming to reveal darker basaltic sand. Because these dunes have a number of similarities to sand dunes on Earth, they are helping scientists decipher weather conditions on Mars, specifically wind direction when the dunes were formed as well as recent changes in the region’s wind patterns. 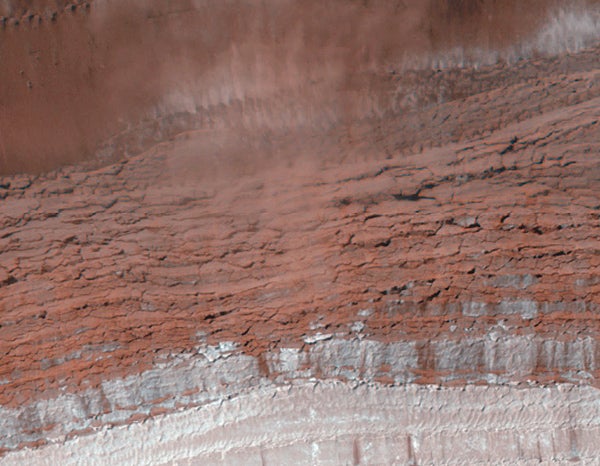 Ice and dust cascade down a steep 2,300-foot slope. The HiRISE has captured no fewer than four avalanches in action, marking rare moments of activity on the mostly motionless terrain. Scientists will study the debris, which is likely more ice than dust, to determine how H2O on Mars cycles between ice and gas. 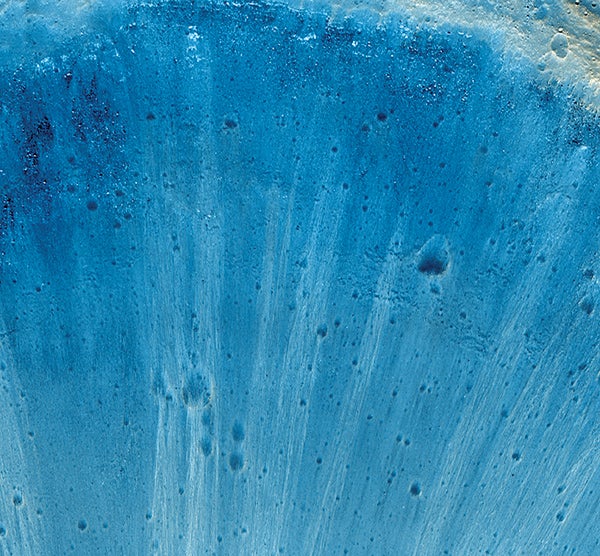 Streaks dash down a slope of the winding Bahram Vallis, an approximately 200-mile-long valley on the Martian surface. Typically scientists see dark and light streaks standing out against a light background. This rare image, with bright streaks shown on a dark slope, is helping scientists examine how and why slope streaks are actually formed. They could be the result of avalanching or weathering, or they could even be liquid stains.
Mars
NASA
Solar System
Space