What Modifications Would I Need to Make to My Car So I Could Drive It On The Moon? 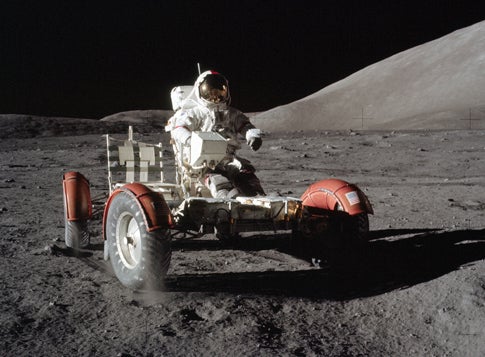 When the Apollo astronauts drove around on the moon, they had to settle for a little buggy. But if you want to tour the Sea of Tranquility in the family SUV or a Ferrari, well, you’re looking at more than a few weekends under the hood.

“Your average car faces several major problems on the moon,” says Brian Wilcox, who heads the development of NASA’s new manned rover, called Athlete [see NASA’s Gilded Chariot]. Chief among those is the small matter of combustion. There’s no oxygen on the moon, so your engine can’t burn fuel to generate power. In addition, your rubber tires would crack or melt on the surface, where temperatures range from that of liquid nitrogen to boiling water.

The upgrades are fairly straightforward. You could swap your Firestones for a set of NASA’s metal mesh lunar-grade tires. You’d need to get rid of that combustion engine, too. An electric engine running on hydrogen fuel cells would perform best in the lunar environment, Wilcox says.

You’d want to keep your trips brief, though. On the surface of the atmosphere-free moon, there’s no protecting yourself from cosmic rays, which at lunar-intensity levels can increase your risk of developing cancer by 3 percent in just six months. If you’re the cautious type, you might consider two-inch-thick, water-filled panels to block the protons spewed from the occasional solar flare, which could kill you in less than an hour.

Once you’d made these modifications, you would reap some nice benefits. Because gravity on the moon is one sixth that of Earth, your engine wouldn’t have to work as hard to propel your car, so you’d score six times as many miles per charge as you would here. And there’s never any traffic. Of course, you’d have to get your car up there. NASA’s going freight rate to the moon runs around $25,000 a pound, so delivering a one-ton car would cost $50 million. Those two-seater buggies left behind from the Apollo missions don’t sound so bad after all.