Megapixels: A moth drinks tears from a bird’s eye

This isn’t creepy animal behavior at all 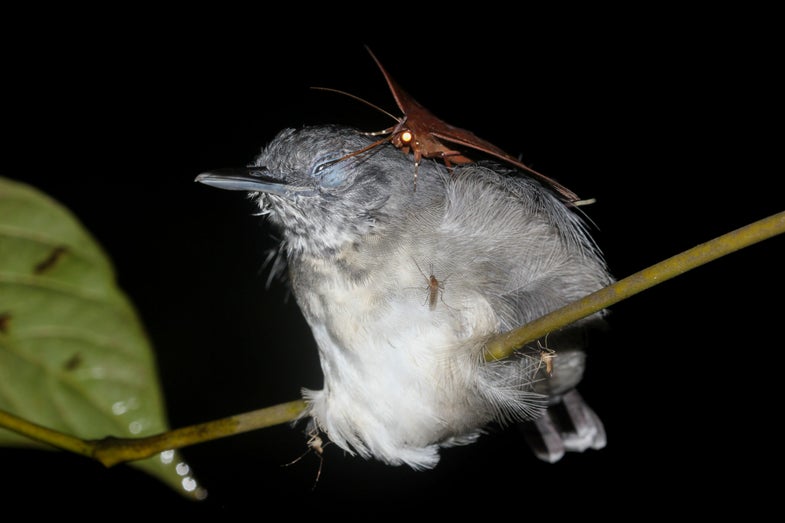 It was close to midnight in the Brazilian rainforest when biologist Leandro João Carneiro de Lima Moraes spotted a small, grey and white bird resting in the understory. But the snoozing creature wasn’t alone: a large brown moth clung to its neck, probing its eyeball with a long, sucking tongue.

A little under an hour later, Moraes came across another bird-moth pair. The bird, another Black-chinned Antbird, once again sat on its branch in a sleepy stupor as the erebid moth fluttered on the bird’s neck and slurped its eye juices.

For the moths, this is a pretty standard night out. Biologists have spotted moths and butterflies drinking tears from mammals, turtles, and crocodiles. Bird eyeballs are a less common source of refreshment—Moraes is the first person to spot moths drinking bird tears in Brazil. Before now, there have only been a couple other accounts of moth-on-bird-eye action in Madagascar and Colombia.

Moths and butterflies use tear-feeding, officially known as lachryphagy, to help supplement their nutrition, as tears can be a good source of sodium and proteins. The insects drink tears for the same reason they congregate on mud puddles and slurp up useful minerals. There doesn’t seem to be any harm or benefit for the birds. Although Moraes says he wonders whether the behavior increases the birds’ chance of contracting an eye disease.

It’s unclear whether moths rarely drink bird tears—or if humans just rarely catch them at it. It will take many more midnight excursions into the world’s tropical forests to figure it out.