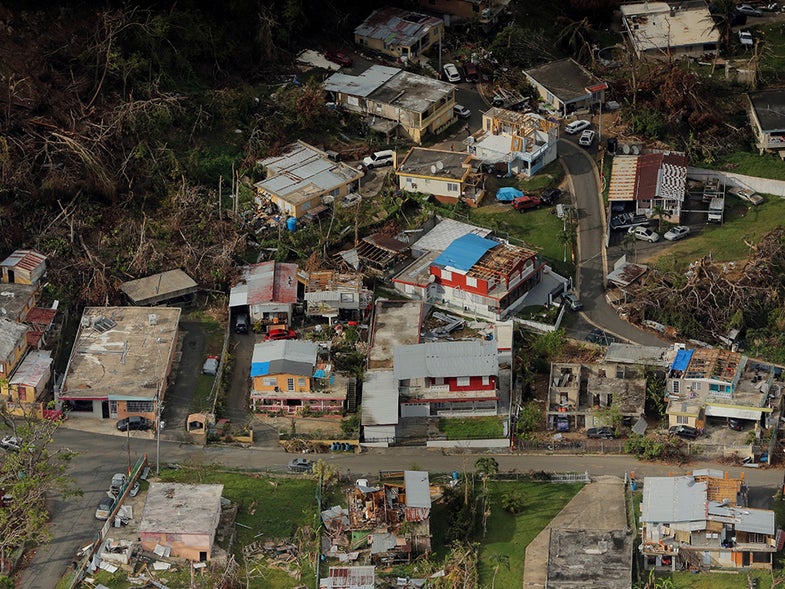 However, mounting evidence now reveals the death toll for Maria far surpasses initial estimates. New research puts the number close to 3,000, adjusted up from just a few dozen when the president made his now infamous remark. This is an estimate, but it is virtually certain that the number is in the thousands. The president has denied these numbers, but without offering any evidence to support his claims.

The devastating truth is that most of the deaths in Puerto Rico were avoidable. The majority of fatalities were not caused by the hurricane’s force, but by the failure of the U.S. disaster response system. Many people died in the days and months after Maria because they lacked access to basic lifesaving goods and services.

The president’s comparison between the Katrina disaster and Puerto Rico’s plight after Maria highlights a major underlying problem. Using fatalities to gauge the magnitude of disaster assumes that all disasters are made the same. The disaster following Hurricane Maria shows us that this is fundamentally untrue.

Understanding this fact is necessary to grapple with how such a disaster was allowed to unfold on U.S. soil, despite one of the biggest and most well-prepared disaster response forces in the world.

More than 3.3 million Americans were caught in Hurricane Maria’s path. Almost all of the deaths occurred in the aftermath of the hurricane.

Compare that to Katrina, when a large proportion of the fatalities occurred immediately during the hurricane. Failing levies caused many to drown as their homes were engulfed in water.

If judged only by the official and known death toll during the first few days or weeks, Puerto Rico appeared to have escaped a catastrophe. In reality, the early declaration that Puerto Rico had escaped catastrophe and that the federal government had already done its job may have been deadlier than the hurricane itself.

While the initial death toll was low, virtually every other indicator suggested Puerto Rico would be reeling from the disaster for years and that lives were still in danger. Basic lifesaving services were inoperational, power was down on the whole island, and people were stranded around the island with no access to clean water or any kind of help.

Disasters can be particularly devastating for those with poor access to government services, lower incomes, or living further from population centers. Many Puerto Ricans fit all three conditions, and most fit at least one or two.

Even if the death toll had not yet grown by the time the president made his remarks, it was already clear in the immediate aftermath of the hurricane that the death toll would grow immensely in the days and weeks to follow.

Even then, the fatality count alone is woefully inadequate for understanding the depth of the disaster still unfolding in Puerto Rico. Considering disaster in terms of fatalities does not capture the hardship experienced by survivors. Although survivors did not pay with their lives, many lives were still changed in devastating and often permanent ways.

Some of these ways are tangible and relatively easy to measure. Increased levels of disability, either directly because of a storm injury or because other conditions were not cared for properly while hospitals were shut, higher incidence of malnutrition, homelessness and lower school participation are good examples. Others are much less tangible. For example, the mental health consequences of disaster can stay with survivors for a lifetime. But all of these consequences leave both the individuals and their communities worse off, slowing recovery.

Disaster responders know that these damages occur in virtually every disaster, and they are consequences not captured or foreshadowed by the fatality count. Even if the true fatality count had been a mere 64, as the original death count indicated, a strong response would have been necessary nonetheless to prevent people’s lives from being irreparably upended.

The inadequate response not only caused more fatalities – it also made virtually every surviving Puerto Rican worse off. Puerto Rico may not have appeared to be a catastrophe at the time, looking only at the death toll, but the slow and inadequate response all but ensured that it would be.

Morten Wendelbo is a Research Fellow at American University. This article was originally featured on The Conversation.