Here's why experts call our desire to drink an ‘evolutionary hangover.’ 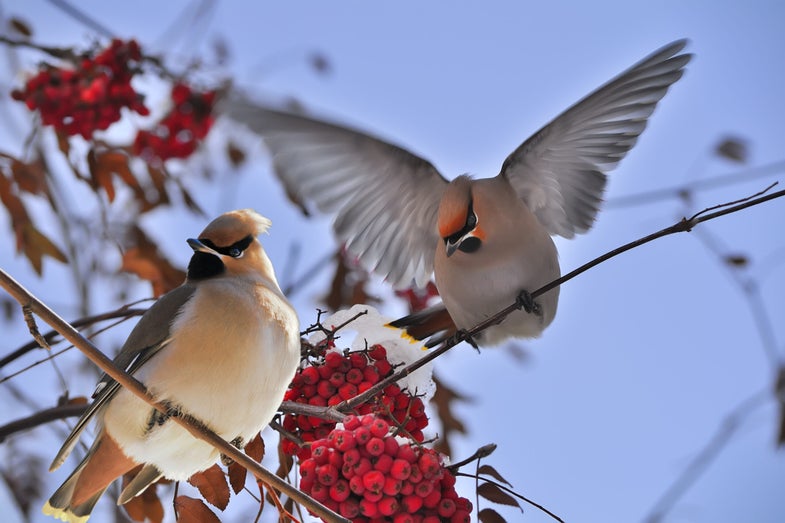 For some midwestern birds, it’s been 5 o’clock all week. After overindulging on boozy berries, the winged residents of Gilbert, Minnesota have been flying into windows, bumping into cars, and generally acting dazed and confused.

But don’t say they’re on a lark.

Their funky behavior might look like harmless fun, but that’s only from our unusual perspective. Humans are one of a very small number of animals that regularly, intentionally use toxins to mess with our own mental functions. Despite widespread anecdotes of elephants buzzed on marula fruit, moose smashed on rotting apples, and Carribean monkeys three sheets to the wind after too many piña coladas, most animals refuse hooch under laboratory conditions. And those creatures that do choose to imbibe tend to be able to hold their liquor. When it comes to intentional boozing, we humans are odd ducks indeed.

Minnesota’s bird bender seems to be the result of an early frost. Usually, most birds are already headed south by the time freezing temperatures trigger fermentation in local berries, according to a report from the Gilbert Police Department. But this year the frost came early. While the police did not identify which specific species were getting into trouble, Bohemian Waxwings have behaved similarly in the past, thanks to berry cocktails coming at an extremely inopportune moment.

“These particular birds,” says Gregory Jenson, a professor of animal behavior at Columbia University, “they’re about to undertake what to a human would be something like running 15 marathons back to back.” And just as many marathoners enjoy a big pasta meal the night before the race, migratory birds of all varieties engage in a feeding frenzy before winging their way south. This year, weird weather just happened to spike their main calorie source.

Anecdotes abound of other animals accidentally getting drunk on fruit. After a few too many fermented apples, Swedish moose have reportedly ended up in trees, and even in a ménage à trois. Scientists are skeptical though. Sure, birds gorging on berries can get buzzed, but can a few dozen apples affect a hulking thousand-pound moose? Unlikely, say a dozen Swedish researchers.

It’s basically the same story for that towering lush, the elephant. The marula fruits of Africa do ferment to about 7 percent alcohol in the right circumstances, but an elephant would need to eat 1,400 in a day to get the 55 liters of hard fruit juice it needs to feel the effects. Other stories of the beasts breaking into moonshine reserves and going on drunken rampages rest largely on circumstantial evidence. In experiments, elephants begrudgingly accepted sugar water cocktails of 7 percent ethanol or less, but only after researchers deprived them of water for 12 hours. And the animals refused to drink anything stiffer than 10 percent, even when parched.

With the creatures too big to get drunk off fruit and too alcohol-averse to drink booze by choice, Jensen suspects that most of these rampaging elephant and moose stories come from people watching animals act in weird ways and jumping to conclusions. “They’re trying to understand the animal’s context with the limited tools of human circumstance,” he says.

While waxwings and elephants get drunk only when nature or experiment forces them to, some members of the animal kingdom do choose to regularly hit the bottle in the wild. The pentailed treeshrew of Malasia, for instance, lives on palm nectar, which tends to be slightly stiff at about half a percent ethanol. That’s no marula cocktail, but it’s apparently enough for the typical treeshrew to get buzzed (which researchers defined as having a Blood Alcohol Content of 0.05) about every third night. Nevertheless, the petite mammal shows few outward signs of intoxication.

Some bats—another variety of small, nectar-binging mammals—are even more impressive heavyweights. In 2010, a team of researchers set up an airborne obstacle course and fed bats a mixture of sugar water and ethanol. Even after blowing (or technically, licking) BACs of up to 0.3, which would leave a human unconscious or dead, the animals had no trouble dodging dangling plastic chains or sending out echolocation calls. If your food supply is boozy, researchers in both studies concluded, then evolution will speed your metabolic mechanisms accordingly. “If being drunk makes you more prone to dying,” Jenson says, “that same selective pressure is going to also create animals that can really hold their liquor.”

If natural selection powers up the livers of animals that need alcohol, and treats drunkenness as a threat to those who don’t, why do humans drink at all? It’s something of a mystery, scientifically speaking, but one clue might come from the vervet monkeys of St. Kitts island in the Carribean, who slurp rum cocktails straight from tourists’ glasses.

A series of experiments in the ’90s tried to get to the bottom of the furry primate’s drinking habits, and found a breakdown in drinking patterns similar to those in humans. “Some systematically avoid it, some drink it a little bit and stop when they get confused and drunk, and there are others that become belligerent, blackout drunks,” Jenson says. One study of 1,000 wild monkeys found that distribution to be about 15 percent, 80 percent, and 5 percent, respectively.

No one knows for sure why the vervets drink, but like humans, they may have just gotten used to ignoring the warning signs. The monkeys have lived near sugar cane (which often burns and ferments) for 300 years, the researchers wrote, and stories of locals catching monkeys with rum and molasses date back to the early 1900s. The common thread, Jensen speculates, is sugar. “They’re going to tap into the signals that these animals depend on for saying, ‘is this a high-calorie food?’” he says. “Evolution couldn’t have planned for sweet drinks.”

Larger, bi-pedal primates may indulge for similarly coincidental reasons. We could have developed our taste for ethanol because it signals ripe, nutrient-rich fruit, one theory goes. Or maybe because it makes us hungry, getting more calories into us. Either way, in a world where the booziest thing you’re likely to find is a slightly rotten apple, those instincts are fine. It was only after the prehistoric Chinese discovered homebrewing in the seventh millennium B.C.E that enjoying the products of fermentation became a health hazard. Someday evolution might catch up and grant us the drunk reflexes of a bat, but for now, some biologists consider alcoholism an “evolutionary hangover.”

Any Minnesotan birds who managed to get off the ground and are lurching their way south right now would likely agree. But for the sake of those who didn’t, we can use our 9,000 years of experience in dealing with our poor decisions to help the waxwings and their winged friends straighten out. There’s a precedent: The town of Whitehorse in the Yukon territory in Canada, which regularly gets birds flying under the influence, has an avian drunk tank made of hamster cages and equipped with flannel blankets.

Good Samaritans in Gilbert who come across a tipsy bird could provide a similarly safe space in which to sleep it off, as wildlife advisors have suggested in the past. Tangling with an unfamiliar toxin is likely freaking the birds out, but some downtime in a cardboard box (with air holes!) should let them sober up before starting the long journey south.