We trained crows to pick up garbage, but can we teach ourselves?

A game for birds became an educational one for humans. 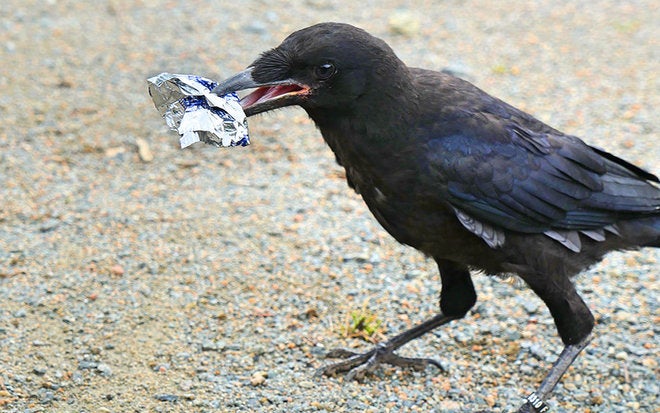 As you enter Puy du Fou, a historical theme park in Les Epesses, France, you might come across a curious new attraction: crows collecting trash in exchange for treats.

No, the birds aren’t the park’s newest cleanup crew. In fact, the performance is merely a training exercise. But Puy du Fou president Nicolas de Villiers says there’s an alternative motive to the workout as well—to send a message to park visitors: Don’t litter.

“We want to show humans that they should pick up waste by themselves,” he says. “People have been a bit shocked seeing the crow doing this game. We’re not educating the crows, we’re educating human beings.”

The whole thing actually started by accident. Puy du Fou hosts a number of live bird shows featuring falcons, owls, vultures, and crows. In one show, a crow is supposed to pick up a rose and offer it to a princess. But during a particular performance, instead of picking up a rose, the crow grabbed a piece of trash and brought it to the princess.

For Villiers, that sparked the idea for both a new game for the birds, and an educational program for park goers. To make it work, the park’s falconer taught six rooks to deposit cigarette butts and other small bits of garbage into a box in exchange for treats. Villiers says the crows now play the game for an hour or so four times a week near the entrance of the theme park.

Kaeli Swift, a corvid researcher at the University of Washington says she sees the trick as benign for the corvids and probably useful for us humans. Corvids, she says, are known to ravage through trash on a regular basis, but rarely, if ever, eat the cigarette butts and various other garbage items they happen to find.

“I think it’s sort of a shame campaign to encourage people to recognize that if a crow can pick up garbage, then we definitely can too,” she says.

Lessons in litter aside, Swift says it could also be a great way to for people to learn about corvids and how incredibly intelligent these birds are. Corvids are among the smartest birds in the world. They can recognize human faces, and have also been known to hold grudges against researchers who have short-changed them in treats. They also often hold funerals for their dearly departed. Recent research suggests they even have the ability to plan for the future. And now, they serve to remind us of our impact on the environment, for good or for bad.

“If you throw something dirty on the ground nature will answer, and the nature that answers is the crow,” says Villiers. “They are very smart. Sometimes I think they’re smarter than us.”