And some went on to have healthy babies of their own. 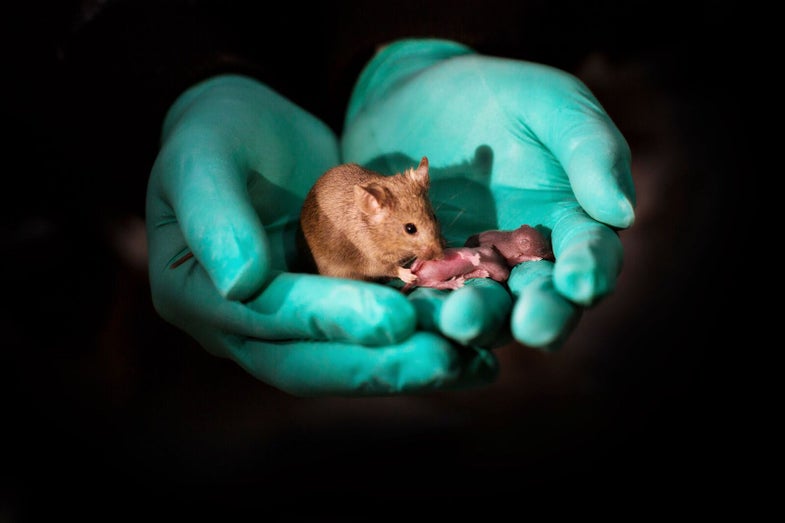 An adult mouse with two mothers, pictured with her own healthy offspring. Leyun Wang
SHARE

Mice ain’t nothing but mammals, but, as a new paper published today in the journal Stem Cell demonstrates, they don’t necessarily need to do it like they do on the Discovery Channel. In that paper, a team of researchers from the Chinese Academy of Science describe the complex process of using embryonic stem cells and gene editing to produce mice born from two parents of the same sex. The mice with two dads only lived about 48 hours, but the mice with two moms lived to adulthood—and were able to have babies of their own by mating with male mice. The research provides a new, sophisticated result that’s part of a significant body of research exploring the question of why we need two parents of different sexes at all.

Parthenogenesis, or reproduction from an unfertilized egg, is not an uncommon way for non-mammals to reproduce. Some fish, insects, and even—sometimes—komodo dragons engage in it. But for mammals, the rule is that parents of two biological sexes are needed to conceive an offspring, and the egg needs to be fertilized by a sperm. Scientists have been trying to figure out why this is the case for a long time, and a lot of that research has involved some of our favorite test subjects: mice.

Having genetic information from two parents is an advantage, says University of Texas geneticist Richard Behringer, because “you’re mixing in variation and reconfiguration.” Basically, more diversity, says Behringer, who was not involved in the current research. The downside, if you want to see it that way, is that two organisms of opposing biological sex are always needed to make babies.

Nobody yet knows quite why we evolved this way, but research has made it clear that it has to do with needing genetic information from both mom and dad in order to grow. In 2004, a team of Japanese researchers was the first to produce genetically modified mice with two moms who could live to adulthood and even reproduce. They did this by changing specific genes involved in an important process called “imprinting.”

Imprinting is one reason why genetic information from two female mice (or male mice) can’t be combined to produce a viable offspring without genetic alterations. Male and female mammals each carry the same number of chromosomes, a matched set that needs to zip together in order for the DNA to successfully code for the proteins that make life possible. But males and females are genetically different. Some genes that are essential to successfully grow a baby are turned turn “on” in females or “off” in males. That means you need one half of your genetic information to be from a female, and the other half from a male, so all of the imprinting genes needed for your earliest stages of development are working. Sex differentiation comes later.

Experiments in the 1980s showed that male and female chromosomes are asymmetric, meaning that you can’t just use two sets of female or male DNA and get everything your lab mouse needs. Both chromosomes have all the genetic information, but different genes are turned off depending on the sex of the parent, creating something called “genetic conflict.” Both sets are necessary to correctly turn on all the necessary genes in the offspring. Researchers found that mice embryos made with two moms and no genetic modifications only grew for about 10 days. “They’ll develop a little but they’ll fail,” Behringer says.

In 2004, Japanese scientists were able to get basically healthy offspring using two mouse eggs. One was immature and had two important imprinting genes modified to turn “on,” as if it was a male genetic contribution. Since then other teams of researchers, including one that Behringer was involved with, have built on their result, generating mice with two dads. That’s proven more difficult.

In the study published today, Chinese researchers tried a different method. Building on earlier work, they used genetically edited embryonic stem cells with only one set of chromosomes. Rather than turning off the genes involved in sex-specific imprinting, they deleted them—three for the female, and seven for the male. They then injected the nuclei of those cells into an egg or sperm, which eventually grew into a living mouse with either two dads or two moms. The embryonic stem cells work because it’s possible to generate ones that only have half of the genetic information needed to make an offspring, and manipulate that information.

The mice with two dads were born alive and lived about two days, while the mice with two moms grew into adulthood and had little mice of their own. Behringer says that more editing of the male stem cells might produce healthier mice with two dads. It’s hard to be sure, though, because we still don’t fully understand the process of imprinting and its effects. Still, this new paper reports a sophisticated, if complicated, method of making parthenogenetic mice. “I was impressed with the technical feat,” Behringer says. “It’s not trivial to make seven [genetic] manipulations. It’s not trivial to make three manipulations.”

He also says the new paper underlines how delicate the balance is of contributions from the male and female genome in mammal reproduction. It’s a balance that scientists are still feeling out how to manipulate, but that understanding could have implications for things from cloning and livestock breeding to—maybe, someday—allowing same-sex couples to have biological children using the genetic material of both parents. The current processes used for mice couldn’t feasibly be used for humans. But “I’m sure there are technologies coming and little twists that will make that possible,” Behringer says.