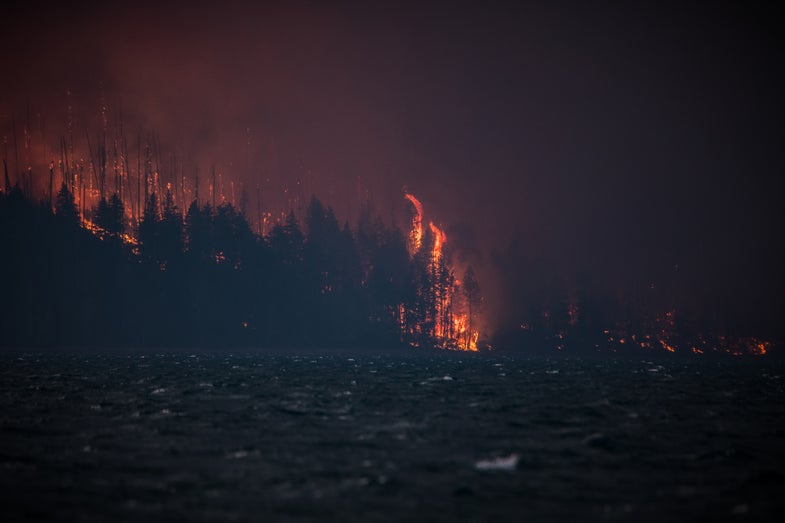 Crystal Kolden is fascinated by fire. It might seem odd to have that deep of a passion for something that destroys millions of acres of land in the U.S. every year. But she’s come to embrace all of the phenomenon’s attributes. She’s even given a talk titled; “How I learned to stop worrying and love wildfire”—a play on the subtitle of Stanley Kubrick’s Dr. Strangelove. For Kolden, understanding fire is her job.

A former wildland firefighter with the Forest Service, Kolden is now a pyrogeographer, someone who studies how fire impacts the landscape and ecology of an area. At the University of Idaho, where she is a Associate Professor of Forest, Rangeland, and Fire Sciences, she works to figure out how people around the world can live with fire.

While she was still a graduate student she got offered the chance of a lifetime by a more established researcher in the field—did she want to be in an experiment that dropped gauges and instruments in front of an oncoming wildfire? (Think of the movie Twister but with fire.) She was sold.

She saw a lot during that time, but one story in particular stands out. And it’s so good, that we let her tell it to us:

A different kind of wildfire danger

By Crystal Kolden (as told to Mary Beth Griggs)

In the summer of 2003, we were trying to capture fire behavior on the Robert’s Fire in northwestern Montana, where the Flathead National Forest meets Glacier National Park (NP). The fire was moving towards the east and threatening the town of Apgar—a little tourist town outside Glacier NP headquarters. The Incident Command Team in charge of the fire decided to use a helicopter burnout operation to try and draw it away from the town again and keep it on the west side of the Middle Fork of the Flathead River.

[Editor’s note: a burnout operation is when fires are deliberately set near a wildfire to try to control its movement.]

The burnout happened right at the confluence of the Middle Fork and the North Fork of the Flathead River, and just below this confluence there is a bridge that we were all standing on, watching the show.

Everything started out great. The helicopter got up in the air and started dropping burning ping pong balls full of this napalm-like gel, which quickly produced a second fire in this dense stand of trees in the triangle of the confluence. As the new fire began to build heat, it started to suck in air from the surrounding area (much like a tornado, it has extremely low pressure), and slowly, slowly, it began to suck in the main head of the wildfire as well, pulling it in the opposite direction of the town. It was very impressive, and amazing to see something like that in real time, especially because we knew it takes a lot of skill to pull that type of maneuver off.

As we watched from the bridge, a grizzly bear came lumbering out of the burning forest and skidded down the bluff to the river. He began to swim across and, as one, almost every person watching turned to see what was on the shore he was headed for. To our horror, there was a firefighter standing there, completely oblivious to the bear headed his way. Ironically, the man in the crosshairs was the safety officer—the person in charge of safety for the entire fire.

Someone called the safety officer on his radio, and we watched as he realized there was a grizzly headed his way. We were all too far away on the bridge to help, so it was him versus the bear. Slowly and carefully he backed up the beach and into the trees, lifting his yellow nomex-clad arms to make himself look bigger. When the bear hit the beach, it was like a car accident you know is coming—no one could look away. But apparently a fire and a swim were enough fun for the day, and the bear went straight past the safety officer and into the trees, completely ignoring him.

The next morning, the safety officer used the morning briefing at fire camp to talk about what you should do when you encounter a bear on a fire. I’m sure he’s never lived that one down.