The EPA banned PCBs 40 years ago, but they're not going anywhere. 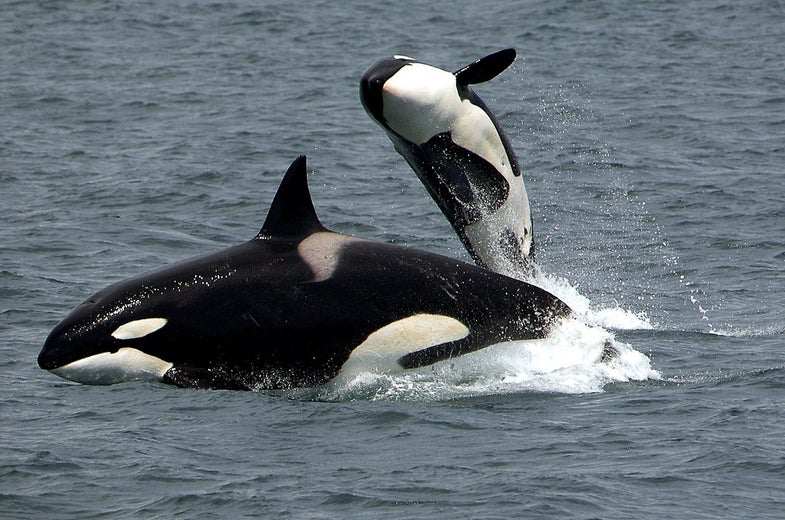 A family of chemicals banned more than 30 years ago is still making it difficult for killer whales around the globe to have babies.

In fact, half of the world’s orca populations could collapse over the next century from exposure to polychlorinated biphenyl (PCB) pollution, according to a study published last month in the journal Science.

“I’m always just surprised to see that we’re still talking about these old contaminants and these are the ones we still find in the highest concentrations everywhere,” says Magali Houde, a researcher with the Aquatic Contaminants Research Division for the Canadian government, who was not involved in the new study.

PCB pollution is not the only issue facing orcas—underwater noise, overfishing, and a complex cocktail of other contaminants also put pressure on whale populations, says Houde. But these whales have higher concentrations of PCBs in their bodies than any other mammal species, says Jean-Pierre Desforges, a post-doctoral researcher at Aarhus University and co-author on the new study.

PCBs represent a whole suite of man-made chemicals constructed from carbon, hydrogen, and chlorine atoms. Because they are fat soluble, PCBs accumulate inside living bodies instead of flushing out with waste. Plankton and small fish store PCBs in their fat, and when larger fish and seals and seabirds eat these smaller prey, they start storing all those PCBs themselves. This process of biomagnification means apex predators like killer whales can accumulate really high levels of toxins over time.

Killer whales that live in areas with a history of manufacturing and using PCBs, like the United States, the United Kingdom, or Japan, tend to have higher levels of PCBs in their blubber, says Desforges. Diet also plays a role. Orca pods that primarily eat larger marine mammals (like seals) will have higher levels of PCBs than killer whale groups that eat primarily fish, Desforges says.

Orcas with higher PCB levels suffer from clear health effects. Without chemical interference, healthy female killer whales only produce one calf every three years or so from about age 15 to age 30 or 40, says Paul Jepson, a veterinary specialist in wildlife populations for the London Zoological Society and co-author on the study. But PCBs mess with reproductive hormones and suppress the immune system, explains Desforges, making it harder to have babies and easier to get sick. Because marine mammal milk has a very high fat content, mother killer whales also pass high doses of toxins directly to their calves.

To evaluate how this would affect the orcas on a large scale, Desforges, Jepson, and fellow authors gathered available blubber data from existing studies of 350 killer whales around the world and separated each population into groups, depending on the level of PCB exposure, from 1 milligram per kilogram of blubber to 40-plus milligrams per kilogram of blubber. They compared the exposure levels of different populations to PCB toxicity to determine estimated impacts on reproduction and immune system suppression.

Then, researchers at the University of St. Andrews put this data into a model looking at the expected population growth or decline of the different killer whale groups. The researchers consistently found groups of whales with higher PCB exposures faced steeper projected population declines. The most highly exposed pods of killer whales found around the United Kingdom, the Strait of Gibraltar, Hawaii, Brazil, Japan, and some areas of the Pacific Northwest faced population declines over the next century they bordered on complete local extinction.

Taking a step back to quantify the global population risk, the scientists then used these population trajectories to calculate the most likely annual population growth rates. Ten out of the 19 groups of whales showed little to no growth at all over the next century, meaning PCBs could seriously affect future growth in more than half of the world’s killer whale populations.

For about 50 years, PCBs made their way into paints, plastics, rubbers, dyes, pigments, carbonless copy paper, electrical equipment, and much more. By the 1970s, evidence emerged tying these chemicals to cancer and a host of other health problems in humans and animals. The United States banned the production of PCBs in 1979. Europe followed suit in 1985, and as of March 2012 at least 176 countries adopted the Stockholm Convention, which bans PCBs and 21 other hazardous chemicals.

We may not make PCBs anymore, but these chemicals stick around in the environment for years and years. Some PCBs get stirred up into the air while others dissolve in water and make their way into rivers, estuaries, and oceans, says Houde. While contamination is worse in areas that historically produced and used PCBs, small amounts of these chemicals have made their way up to the Arctic and Antarctic on wind and ocean currents.

To protect killer whales going forward, more countries need to emulate the Superfund program in the United States, says Jepson. The U.S. produced 50 percent of the 1 to 1.5 million tons of PCBs from 1929 to 1979, and yet it has much lower levels of environmental PCBs today compared to Europe, says Jepson. This is largely thanks to the active clean-up of contaminated sites to prevent more PCBs from entering the ecosystem, where it is much more difficult to address.

But we seem to be a ways away from this kind of proactive solution. The Stockholm Convention gives countries until 2025 to identify all the PCB equipment and materials they have, and until 2028 to destroy all these products. A 2016 assessment by the United Nations estimates 83 percent of the world’s PCB products are still awaiting destruction.

In the meantime, it would help to list specific killer whale populations as threatened or endangered, says Jepson. Technically, all killer whales belong to the same species, Orcinus orca. Scientists debate whether they should recategorize the whales into subspecies, says Jepson, and doing so would make it much easier to protect groups in more polluted areas. Legal protection can motivate countries to clean up their PCBs and take a more active role in protecting the whales. But scientists are a long way from resolving the subspecies debate, Jepson says.

Desforges and Jepson hope this study will help people realize the PCB problem is far from solved, and galvanize countries into action. For now, Jepson takes comfort in the fact that not all killer whale populations are in danger from PCBs.

“If we do lose 50 percent of our killer whales there is still another 50 percent that could rebuild the other populations eventually,” says Jepson. “They’re a very resilient species.”