This bizarre phenomenon could better predict how quickly the planet’s ice is melting into the ocean. 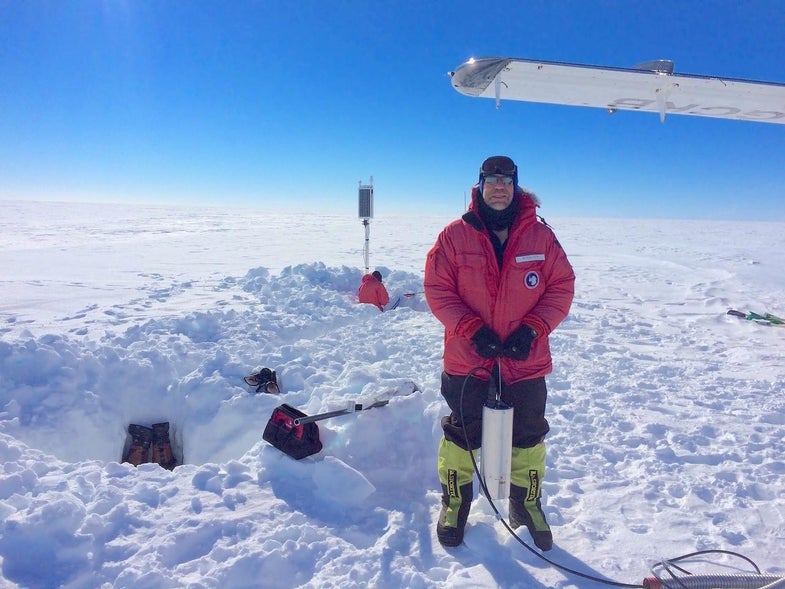 Antarctica is honestly kind of creepy. It’s leaking from the inside; it loves to ooze some bloody liquids out into the ocean like some gargantuan stabbing victim; it’s a dry hellscape despite being covered in a thick layer of literal water (albeit the frozen variety); and now it turns out Antarctica is an avid whistler of some eerie tunes. Bear with me: a new study published in Geophysical Review Letters this week details how scientists have picked up on strange tones resonating near the surface ofthe massive Ross Ice Shelf in Antarctica. While these wintery sounds have their place in the wintery landscape, you can banish the idea of anything resembling Frozen—these songs are more of the inaudible-to-human-ears type.

“Ice shelves are a critical element of the Antarctic glacier system,” says Rick Aster, a geophysicist at Colorado State University and a coauthor of the new study. “We care deeply about them because their stability in decades to come will substantially affect global sea level rise and other issues that affect millions. This discovery provides a new tool to measure and understand how they are affected by warming in the atmosphere and oceans.”

Lead investigator Julien Chaput, a geophysicist at the University of Texas, El Paso who began this work under Aster at CSU, describes the study as a “bit of a happy accident,” stemming from a broadband seismic instrument deployment on the Ross Ice Shelf, which is roughly the size of Texas, to study the crust and mantle underneath. Chaput, an expert in ambient noise monitoring, started noticing “strange spectral anomalies that escaped easy explanations,” suggesting some sort of high-frequency seismic waves were persistently trapped in the firn (the top couple of meters of snow).

“The end result was really just the outcome of chasing a cryptic puzzle,” he says. “Chasing down that lead gave us a unique insight into all the environmental effects an ice shelf can ‘feel,’ and on remarkably short time scales.”

The team eventually found that these trapped firn waves were created by the constant hum of wind brushing against the snow on the surface of the shelf. These sounds have been recorded before in other areas of the world, including Antarctica, but this research found that the tones were changing over time, in direct response to what was going on in the environment.

In Antarctica, movements on the surface can often be translated into vibrations that propagate throughout the ice shelf. The frequency of these waves vary based on changes to the loose snow in the firn, including the impacts of heavy winds or temperature shifts. The team measured the vibrations (aka seismic waves) that moved through the shelf for a little over two years, and were able to detect in what ways the frequency shifted based on nasty storm events or heavy winds, seasonal changes or unusual shakeups in average temperatures, and so forth.

“This last point is particularly interesting,” says Chaput, “because it could allow us to quantify which ice shelves have firn layers that are strongly impacted by repeated warming events, and also yield a metric of how resilient these firn layers might be.”

These effects were perhaps crystallized best in observations made in January 2016, during a particularly warm period when temperatures rose slightly above freezing, and allowed a bit of the snow and ice to melt. The melting slowed down the seismic waves and changed their pitch. But when temperatures rose once more, the waves didn’t revert back to their previous state. The firn had been altered permanently, and the ice shelf song was changed permanently as well.

The study is a particularly good illustration of why it would be useful to use seismic observations to keep a close eye on firn, all over the world. Firn melt is broadly considered by scientists to be one of the most important factors in the destabilization of an ice shelf. And ice shelves themselves are particularly important, since their melting accelerates the streaming of ice into the ocean from abutting ice sheets. Recent years have highlighted the role of ice shelves as the “real heavy hitters in any potential sea rise,” says Chaput, and he’s encouraged by the notion of using this technique to study ice melt broadly across the globe. He hopes future researchers might be able to spot melting pockets or cracks that are forewarning signs of a larger shelf breakup, be it in Antarctica or Greenland or wherever else.

“Polar environments are more or less the vanguard of climate change, but instrumentation and modeling of these environments has lagged behind by quite a margin,” says Chaput. “We all know we’re in hot water—the problem is, we’re not really sure how hot it is yet.” He cites the collapse of Larsen B in 2002 as a prime example of how limited we’ve been in really spotting and gauging the loss of ice mass as it occurs.

“In a sense, this way of looking at continuous seismic data could be considered a ‘canary in the mines’ sort of observation, with almost real time temporal resolution,” he says. “Deploying a single seismometer on an ice shelf could provide the means of observing very subtle environmental forcing, on time scales as short as minutes, and would provide a means to directly understand the sequence of physical changes that happen in the near surface as a melting event strikes.”

There’s a lot of work that needs to take place to really prove how viable seismological observation could be for monitoring ice melt, but it’s probably a safe bet to follow the humming. If the ice is going to be singing aloud, we may as well keep an ear out and listen closely.