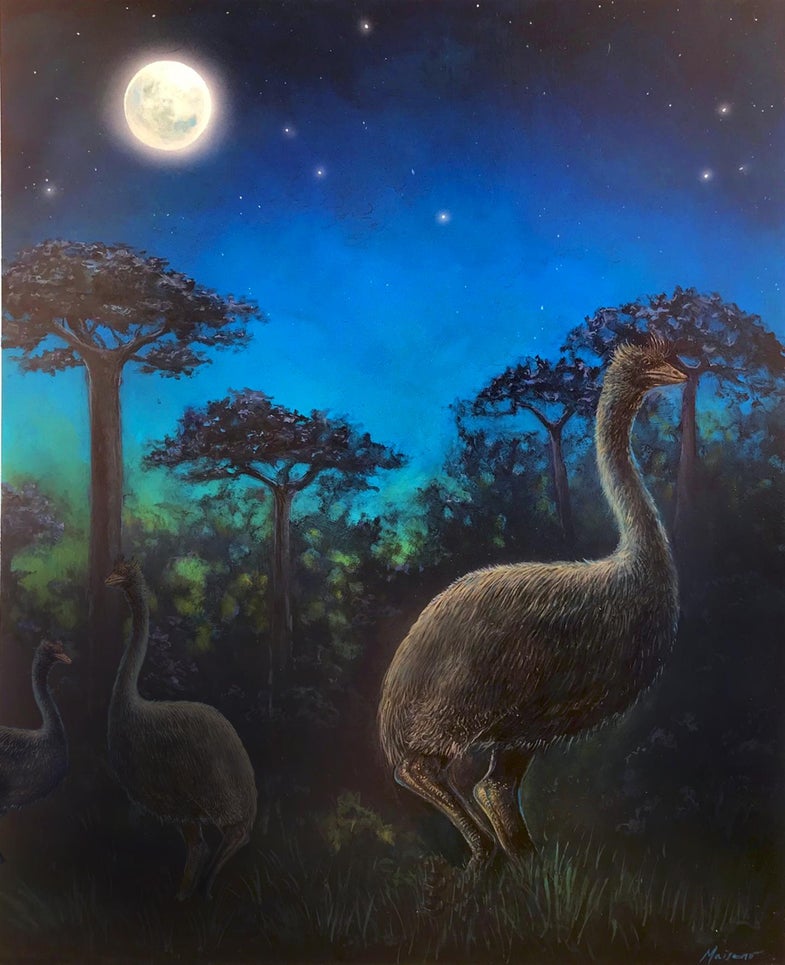 So while most of the world has birds that rely primarily on vision, Madagascar and New Zealand has a couple of strange additions. Or in some cases, had.

Though the phrase “elephant bird” probably conjures images of an emu or ostrich, a recent study published in Proceedings of the Royal Society B suggests that these extinct giants had more in common with the kiwi. Both were flightless and, according to the new research, were mostly blind and nocturnal. This sort of fits into how you might think of a kiwi. They’re diminutive, with tiny fluffy brown feathers and preposterously large eggs in comparison to their bodies—you might even call them silly. The fact that they can hardly see and roam around the New Zealand bush at night in search of grubs jives with their image.

Most of this is a recent revelation. Fossils of this extinct family are rare, and it wasn’t until researchers at the University of Texas at Austin digitally reconstructed brains from two elephant bird skulls that they realized the birds might have been mostly blind. They came to this conclusion by looking at the olfactory bulb and optic lobes, where smells and images are processed respectively, and finding that the balance was out of whack compared to your average bird. Most avian species rely primarily on vision to navigate and hunt prey, so their optic lobes are well developed in comparison to their olfactory bulbs. This is even true of nocturnal species. Owls hunt at night, and their evolutionary strategy has been to increase their night vision capabilities to see in the darkness.

But elephant birds, like kiwis, have much larger olfactory bulbs in proportion to their optic lobes, suggesting that they rely more on smell than on sight. In fact, they practically have no optic lobes. That means the birds would have been nearly blind.

Although the idea of an enormous bird crashing around in the underbrush is fairly hilarious, odds are these behemoths had no problem navigating the woods. As the authors of this recent paper point out, some wild kiwis are completely blind yet have no reduction in their overall fitness. They have such complex somatosensory, olfactory, and auditory systems that they’re able to get around just fine in the dark, much like bats (except sans sonar). The researchers suspect that elephant birds may not have have been quite the evolutionary aces that kiwis are, but were obviously well-adapted enough to survive. Elephant birds even managed to stick around after early human settlement of Madagascar, a feat which many birds native to islands—like New Zealand’s moa—fail to achieve. Some combination of human intervention and habitat loss seems to have eventually killed them off in the 1600s, though no one is entirely sure.

After all, until this paper, no one had ever suspected that a bird this big would be blind. We clearly have a lot to learn.

This discovery will help researchers figure out the evolutionary tree that spawned kiwis, elephant birds, emus, cassowaries, moas, rheas, and tinamous (a family of birds living in Mexico and Central and South America). That group, Palaeognathae, is the sister clade to all other living birds, making them useful tools in understanding how all birds came to be.

They’re also just odd. “Palaeognath evolution has been marked by repeated gains of gigantism, flightlessness, island endemism, and crepuscularity/nocturnality,” note the authors. They go on to explain that losing sight in favor of olfaction might be a trait available only to ground-dwelling birds on predator-free islands, since “only flightless nocturnal birds on islands are known to reduce the visual system in favor of other senses.” Without large mammals or reptiles around to eat them, birds could evolve to sense their prey in other ways—without worrying about having to spot a potential predator.

We still know very little about this enormous weirdos, however, and the researchers hope their discovery will spur more investigation into the multiple species of elephant bird. Who knows what surprises might lurk beneath all those feathers.