Excerpt—Poached: Inside the Dark World of Wildlife Trafficking 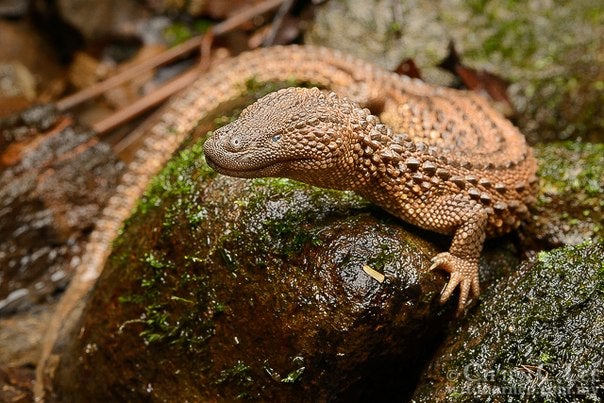 The following is excerpted from Poached: Inside the Dark World of Wildlife Trafficking by Rachel Love Nuwer.

As with most facets of wildlife trafficking, the immensity of the pet trade can quickly become overwhelming. But homing in on one peculiar yet exemplary case study can help bring the subject into focus: that of the earless monitor lizard of Indonesia.

The story begins on May 30, 2008, when a research team armed with GPS units, notebooks, and binoculars set out into a dense patch of jungle in Indonesian Borneo. An oil palm company had commissioned them to survey the area for important environmental and cultural assets that might be impacted should the forest be converted into a plantation. They had no idea, however, that an “exceptional herpetofaunal discovery” awaited them that morning, they later wrote.

As midday approached, the sweating group decided to take a break from their uphill trek to have lunch next to a shallow, rocky stream bed. Glancing at the creek between bites, one of the local team members spotted something of note: a brownish-yellow reptile, about a foot long, that he referred to simply as kadal—the generic Indonesian word for “lizard.” The partially submerged creature had the elongated, snakelike body of a Chinese dragon, the facial features of a cartoon dinosaur, and the pronounced scales of a mini-alligator.

For a few minutes, the strange visitor became the focus of attention as the group photographed it and gently passed it around. To their amazement, it hardly struggled and did not try to bite them. Lunch soon resumed priority, though, and they put the creature back into the stream, where it sat, unmoving, for the next hour. As the group prepared to leave, one of the team members glanced back for a final look, and noted that it had disappeared.

It wasn’t until the researchers returned to their computers and reptile identification books that they realized the importance of what they had found: the mystery creature was, in fact, the elusive earless monitor lizard, Lanthanotus borneensis (literally, “hidden ear from Borneo,” named for its lack of external ear openings). Until recently, scientists and collectors had captured fewer than one hundred specimens since the species’ 1877 discovery. Among reptile enthusiasts, its rarity and mystique have earned it a grandiose nickname: “the Holy Grail of herpetology.”

In 2012, a few members of the Indonesian survey team published a paper about their finding in the Journal of Threatened Taxa. They were careful to limit the amount of detail they included about the lizard’s location, noting that, “due to the species’ rareness and its high conservation value, it cannot be ruled out that pet reptile collectors and traders may misuse this . . . information.” Although they omitted GPS coordinates, they did print a rough map and a description of the habitat.

Unfortunately, the authors had underestimated the tenacity and resourcefulness of the world’s unscrupulous reptile collectors. The map and scant description provided ample detail for them to go on—as evidenced by the snowballing number of earless monitor lizards that quickly began turning up in collections and online ads. In June 2014, Vincent Nijman, a conservation ecologist at Oxford Brookes University, spotted a blog post offering pairs of earless monitor lizards for sale in the Czech Republic. By July, specimens had made their way to Europe’s largest reptile fair, held in Germany, while photos posted on Facebook, online reptile forums, and dealers’ websites began surfacing in countries from Japan to the UK.

Nijman was torn about what to do. On the one hand, he didn’t want to bring even more attention to the lizard. On the other, raising awareness about its plight could alert customs agents to look out for it and help it gain important protection. Like so many other obscure species, it was not yet included in the CITES international trade appendixes. In the end, Nijman decided to sound the alarm.

A quick walker with a firm handshake, Nijman stands out for his endearing eccentricities: he styles his shoulder-length curly hair like Kenny G’s, continues to use a Nokia brick phone from the mid-2000s, and loves singing Dutch-accented ABBA at karaoke. When I asked him about a dusty human skull that rests on the windowsill of his cluttered office, he picked it up, looked into its empty sockets for a moment, and then replied, “I have no idea who this is or where it came from.”

He also happens to be one of the world’s leading academic experts on wildlife trafficking. Although he’s spent time aplenty conducting surveys in the field, one of his favorite investigative methods can be carried out right under the gaze of that office mystery skull: Internet sleuthing to uncover new trends in the illegal trade. As he likes to tell students and reporters alike, “You can monitor these kinds of things and do entire studies without even leaving the office.”

In 2014, he did just that for the earless monitor lizard, publishing his findings along with coauthor Sarah Stoner. Over a seventeen-month period, they documented nearly one hundred earless monitor lizards for sale online, offered by thirty-five different people in eleven countries. Germany and other European nations came out on top, although a few American buyers were also involved (not surprising, given that the United States accounts for 56 percent of all live reptile imports). Some lizards were originally priced at as much as $15,500, but, as the market became saturated, their value fell to $3,300.

“The scale and pace of this trade is something that, twenty years ago, would not have been possible to do through letters and phone calls,” Nijman said. “The Internet allows people to very quickly become a part of a small global network of specialized, niche hobbyists who can instantly share information and arrange deals.”

The earless monitor lizards that Nijman found for sale on Facebook and reptile forums no doubt originated from the region where the research team worked in Indonesian Borneo. Collectors now regularly travel there, and local villagers now eagerly provide them with what they’re after. Hotel staff reportedly tell foreign guests that they can get earless monitor lizards for them, and shopkeepers— in the style of knock-off handbag hawkers in New York City—furtively call out, “We have lizards here!” Some villagers have supposedly made enough off the reptiles to afford a new a motorbike or television.

This is not the first time a species’ discovery or rediscovery has triggered a collecting frenzy. According to a 2017 Science paper, more than twenty newly described reptiles have been targeted after traders learned of their location in the scientific literature. In 2010, for example, researchers described a new species of psychedelic gecko on a small Vietnamese island; two years later, the geckos began regularly turning up for sale in Europe, priced at up to $3,300 per pair. Likewise, in 2010, when a snake no one had seen since the 1930s suddenly turned up in Vietnam—a so-called Lazarus species, back from the dead of presumed extinction—its rediscovery was quickly followed by online ads touting pairs of “farmed” specimens for $1,800.

Therefore, conservationists have learned the hard way that some discoveries are better left a carefully guarded secret. They either omit location data from papers entirely, or—in the case of some security-savvy journals—upload sensitive information to locked files that can be accessed only with permission. “There are things we keep seriously quiet about, including very, very high-profile species,” Nijman said. “Because we know if the news comes out, it’ll be the end of them.”

For the earless monitor lizard, such a fate may already be set in motion. But because no field data exist for the species—including such basic information as population size or distribution—there’s no way of determining if and when the trade will become an existential threat. In the meantime, traders continue to plunder the wild for the lizards, and collectors continue to buy them.

Excerpted from Poached: Inside the Dark World of Wildlife Trafficking by Rachel Love Nuwer. Copyright © 2018. Available from Da Capo Press, an imprint of Perseus Books, LLC, a subsidiary of Hachette Book Group, Inc.