This fungus has over 23,000 sexes and no qualms about it

Sex is extra strange if you're a shroom. 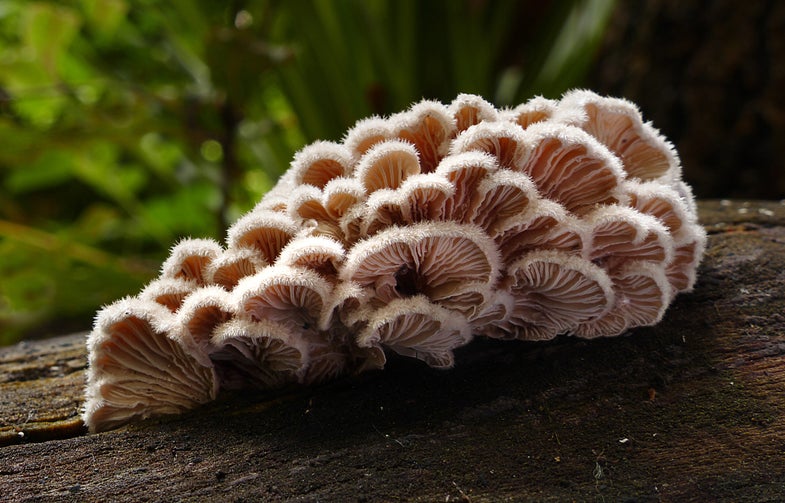 Fungi don’t abide by gender constructs. They live uninhibited (albeit unconscious) lives, mating freely with almost any other member of their species. In short, they’re wonderful.

One particularly promiscuous mushroom, known scientifically as Schizophyllum commune (and affectionately as “schizo”), looks deceptively mundane. It’s a form of wood rot that lives in parts of the East Indies, Thailand, India, Madagascar, and Nigeria, where plenty of people eat it—despite many Western guidebooks classifying the shroom as “inedible.” Apparently the tough, rubbery texture isn’t a turn off for other cultures. It’s used medicinally, too, since—like many fungi—it has antiviral and antifungal properties to keep it safe in the wild. And if you knew nothing about mycology, you’d never expect a humble white wood rot to have tens of thousands of sexual variations.

S. commune has an unusually high number of sexes, but having many variants isn’t actually uncommon in the fungal world. Most animals are pretty limited in their biological sex options, because reproductive compatibility often depends on anatomical compatibility. Or, to be more crude about it, some kind of penis generally has to fit into some kind of vagina. There are animals that fertilize eggs externally, but even those species usually have one organism that lays the eggs and another that fertilizes them. Some hermaphrodites use more of an egalitarian stabbing mechanism, as do plenty of insects, but there’s still a phallic object being thrust into another being. It’s not fun, but it’s true.

Fungi aren’t limited by the same anatomical constraints. They still have to physically merge in order to procreate, but these relatively simple organisms (not that simple—they’re more closely related to animals than to plants, and are generally all sorts of weird) can recombine genetic material in a more straightforward way. After all, mating is really just getting two cells to merge into one such that their DNA can combine. Fungi don’t have to go through the whole ejaculation process to get there—they produce similar sex cells to humans, then mix their DNA through direct cellular transfer. They essentially combine by creating a so-called “clamp connection,” which allows the fungi to transfer nuclei from one cell to another. Animals and plants have to do the same thing with some kind of vehicle for the male and female cells—whether it be sperm or pollen—but fungi just sidle up against each other and let the fun begin.

All of this is controlled by a set of two genes on two different chromosomes. And in keeping with the straightforward nature of mycology, those genetic locations are called A and B. Each of these genes also has two alleles, or alternative forms, named alpha and beta. So in total, that makes four distinct spots in the S. commune genome where variation can occur: A-alpha, A-beta, B-alpha, and B-beta.

Here’s where it gets more complicated. Each of those four locations can have multiple variants, which are all slightly different versions of the same set of proteins. A-beta has approximately 32 possible specificities, and the rest have about nine. So to sex an S. commune fungus (yes, “sex” is the scientific word for determining an organism’s sex), you’d have to genetically sequence it to come up with something like A-alpha-1, A-beta-8, B-alpha-3, B-beta-5.

For two S. communes to mate, they have to have different variants somewhere on A and somewhere on B. So two fungi that have A-alpha-1 and B-beta-5, but have different A-betas and B-alphas, can reproduce. But if they have matching A-alphas and A-betas, they can’t. This has to do with what the A and B genes do when reproduction takes place. They’re basically both controlling pheromones and pheromone receptors—pheromones are smelly chemicals that organisms use to influence one another’s behavior—which is how fungi communicate sexually. Compatible sets of pheromones and receptors are able to touch base and mate, whereas incompatible sets simply can’t initiate the process.

It’s still not really clear how the alpha and beta components affect compatibility, but we do know that certain genetic types recombine more frequently than others, and that in general S. commune can mate with the vast majority of its own population.

This is actually a great strategy for preserving sexual diversity. S. commune literally has to mate with a genetically distinct individual, so it’s constantly increasing the number of sexual variations that exist in a population. And because there are so many ways for the sex to vary, you end up with over 23,000 of them. This kind of four-locus mating system is common amongst fungi, it’s just uncommon to have so many variations. So the next time you eat a mushroom, remember that it probably had a more complicated sex life than you do.