Birds And Humans ‘Talk’ To Each Other To Outsmart Bees

Show me the honey! 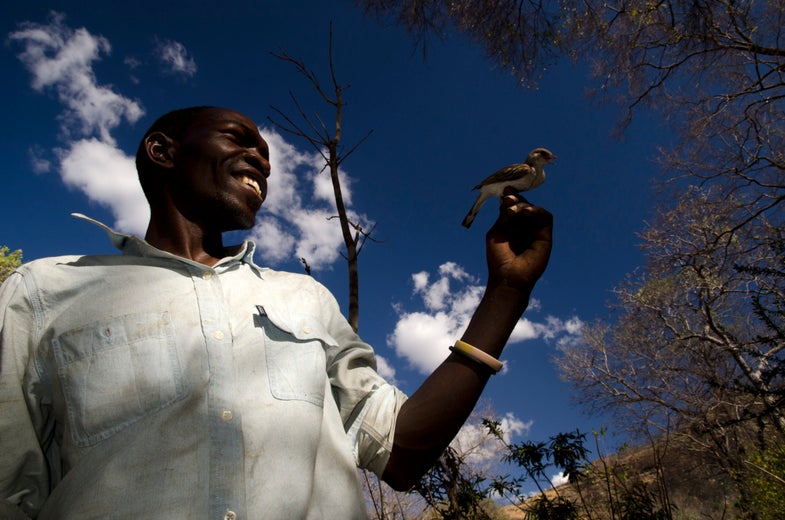 In 1569, a Portuguese missionary working in what is now Mozambique noticed something strange: tiny birds flying in and out of the church to nibble at the beeswax altar candles. Though the was perplexed by the behavior, it would have made perfect sense to locals. The birds in question were honeyguides, a species known for their predilection for wax, and their cooperative relationship with human honey hunters.

Human-animal cooperation, especially when it comes to food gathering, isn’t all that rare. We’ve trained dogs to corner game, pigs to sniff out truffles, even cormorants to catch fish.

But in all of these cases, the animals are either domesticated or trained to do our bidding. Human collaboration with wild animals is rare. In one remarkable case, dolphins have been shown to work cooperatively with Brazilian mullet fishermen to catch fish, to the mutual benefit of man and beast. But honeyguides and their human partners take cooperation a step further.

For possibly hundreds of thousands of years, sub-Saharan honey hunters have used the birds to find bees nests. And in turn, honeyguide birds have used humans to help them access the wax they like to eat.

What’s truly incredible is how they find one another before undertaking their mutual honey hunts: by “talking” to each other using specialized calls. According to a new study led by evolutionary biologist Claire Spottiswoode, the calls dramatically increase the odds that man and bird will enjoy a sweet reward at the end of their hunt.

“The relationship is remarkable because it involves interactions that have most likely evolved through natural selection over hundreds of thousands of years,” Spottiswoode, an evolutionary biologist at Cambridge and the University of Cape Town, told Popular Science. In fact, she says, some have theorized that the relationship may date back 1.9 million years, to the days of homo erectus, the human ancestor that first tamed fire.

“What makes us useful to the birds is our ability to control fire and smoke,” she says.

Though honeyguides like to eat beeswax, they’re not exactly well equipped to get it on their own. The wax is locked deep within the nests of honeybees whose stings are painful and potentially even lethal to the tiny birds. Humans avoid these stings by bathing the bees’ nest with smoke, which masks their alarm pheromones, making them less likely to attack. The trick for humans, of course, is finding the nest in the first place.

Spottiswoode and her colleagues accompanied members of the Yao ethnic group as they carried out numerous honey hunts in the Niassa National Reserve in Mozambique, observing the hunts and carrying out experiments.

Here’s how the human-bird partnership works: First the honey hunters use special calls to attract honeyguides, and the honey guides respond with calls used specifically to get human attention. Once the interspecies team has linked up, the birds flit from tree to tree indicating the direction of a bees’ nest, and the humans follow along below. After successfully leading the humans to a nest, the honeyguide simply watches and waits as its human compatriots go to work.

Step one for the Yao men is smoking the aggressive bees to create a safer working environment. (Even as an observer, Spottiswoode says she was stung many times.)

Then, they use handmade axes to chop into the tree trunk to access the nest. When the honey is extracted, the honey-hunters separate the honey and then set the wax aside, sometimes presenting it ceremoniously to the honeyguides to enjoy. All in all, a pretty sweet deal.

Spottiswoode was particularly interested in whether the birds associated the hunters’ call with a specific meaning. The call, passed down from many generations of Yao men, is a loud trill followed by a short grunt. It sounds like,”Brrr-hm!”

She compared the honeyguides’ response to the “Brrr-hm” sound to two control sounds, and found that birds responded far more readily to the traditional call. What’s more, Spottiswoode found that hunters using the traditional call were more likely to find a bird to guide them, and once they had, more likely to find honey. Overall using the “Brrr-hm” call tripled the chance of a successful hunt–a fact both man and bird could appreciate.

Spottiswoode hopes not only to bring attention to the unique relationship between the Yao honey hunters and their feathered guides, but also to Mozambique’s Niassa National Reserve. It is a “tremendous natural heritage,” she says, which by remaining relatively untouched has allowed this remarkable human-animal partnership to survive.

This story was updated after publication to correct Claire Spottiswoode’s statement from “resource” to “heritage.”​