Find a tree-lined field before sunset and wait for the American woodcock’s show to begin. 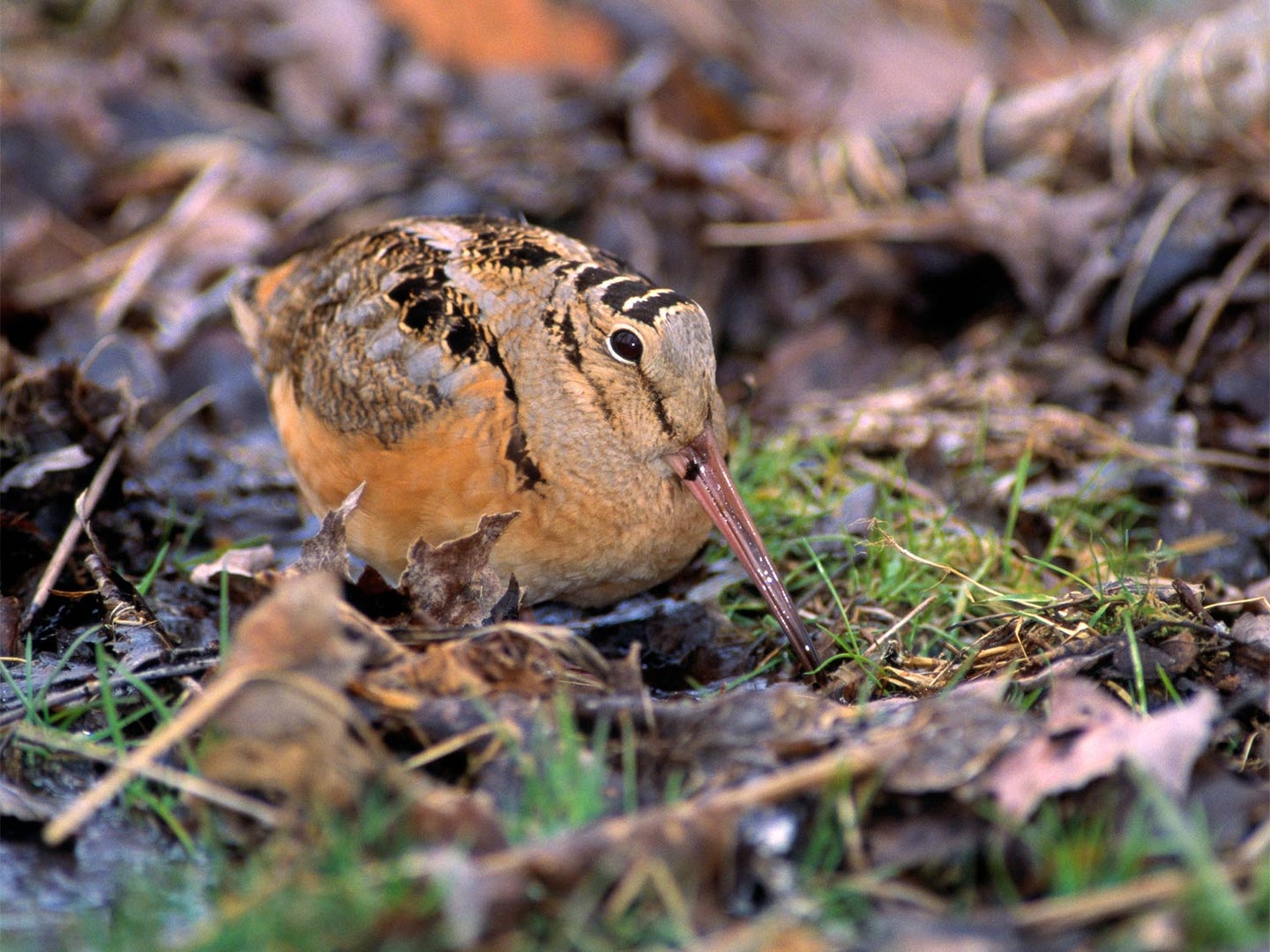 An American woodcock probes for worms and insects in the duff of the spring woods. Deposit Photos
SHARE

My woodcock season opens right about now. The landscape is colorless, trees are still black skeletons, but these little birds are seemingly celebrating the coming of spring with a sky dance that few hunters ever witness. The performance may begin as early as February in some places, as late as May in others. Completing their night flights from the south where they overwintered, woodcock seek out hillside pastures or abandoned fields rimmed by woodland and studded with alders, cedars, or thornapples. Here the male—probably hatched in this very place a year or two before—stakes his claim and begins a search for a mate. But it doesn’t come without some effort.

The opening act begins at dusk with the male making what is typically described as a series of distinct nasal peeent sounds (to me the call is more a raspy bzeeent, similar to the nighthawk’s), spaced five or six seconds apart. This serves to notify and attract any potential mates in the area. The call is first made from the ground, before the stiletto-beaked male makes a somewhat belabored liftoff, flying just 20 to 30 feet above the field, then pumping its wings to move skyward.

The near observer plainly hears the whistling produced by the bird’s primary wing feathers—it’s the same sound heard when a bird is flushed under gun during the fall. The 11-inch bird ascends in ever broadening spirals until, at 200 to 300 feet, he circles wide. The whistle of the wings stops, and the bird begins to make canary-like chirps. Then he begins a wild, swift, zigzag plummet, like a leaf falling rapidly. The chirps get louder as the bird approaches the ground. Just when it appears that the male is going to crash, he pulls out of the plunge and softly flutters to the same spot from which he took off.

Now, intent on capturing the action of at least one receptive female, the male woodcock struts stiff-legged like a tiny turkey gobbler, fanning his black-rimmed tail, stretching his stunted neck, and again bzeeenting for a few minutes. If no female approaches, the male takes to the air for subsequent flights, which on moonlit nights may continue well toward midnight. He may even repeat the flights at sunrise.

The exhibition is best observed by cautiously moving to the bird’s takeoff point as he begins his ascension. Some birders claim to have viewed the birds in a flashlight beam. (I’ve never risked making such a bold intrusion). It’s not unusual for two or three males to fly over the same field.

In one night, a male woodcock may mate with several females. The hens will eventually incubate their four eggs and raise young within 150 yards of the singing grounds.

The bonus of finding a spring singing field is that you also will have pinpointed an autumn covert. Abundant earthworms will hold the birds into the fall season, and entice migrating woodcock to stop after a night’s travel. When hunting them, however, concentrate on the adjacent woods, particularly areas of thick brush and low-growth trees shaded by medium canopy. Ignore the field—woodcock only take the stage in spring.

Gearing up for the show

If you hear a buzzing sound in the tag alders or a bubbly twittering above a greening pasture, grab a binocular, a camo covering, and the kids if you’ve got them. It’s easy to get a front-row seat to spring’s best aerial show. If you’ve never seen it, you should make a point to this year. You’ll have to trust me that it’s totally worth it.

The first trick is knowing a woodcock when you hear one. The male’s nasally peent call sounds more like a buzzing insect or a droning frog than any gamebird. (I can’t tell you how many times I’ve pointed it out to turkey-hunting friends who’ve said, “That’s a woodcock?”) As for the twittering music of the bird in flight, it seems to come and go on the breeze; it’s faint and far away and then suddenly clear and sweet. Both are sounds you want to hear in person, as evening falls on the spring fields. But you can check both out here, so you’ll know exactly what to listen for.

When you do hear peenting in person, take your bino and camo covering and sneak to within 75 yards or so of the sound—close enough to clearly hear and locate the bird, but not so close that you spook it. Then just wait for the woodcock to fly. (You’ll hear it.) Quickly move closer to where you heard the peenting, lay down on your back, throw the camo covering over yourself, and look to the sky.

Listen for the bird’s twittering and chirping, and you’ll soon spot the male in flight, circling higher and higher. Bring your binocular up and watch the show.

You can get quite close to spring woodcock this way; just be careful not to disturb them on their singing grounds. If there’s any indication that a bird is getting antsy, it’s best to back off some. When you’re ready to leave, wait until the bird has flown high overhead, and then slip out quietly.

Spring turkey season is a great time to listen for woodcock, particularly when you’re trying to roost a bird in the evening. I’m lucky that I don’t even have to leave the house. Every spring, my wife and kids and I hear them from our backyard or deck, and rushing out to the next-door pasture to lay down and watch the sky has become a rite of spring. After a decade or so of this, the kids are old enough now that they’ll complain at first about the hassle of gathering the gear and hiking out to the field, but that all changes once we’re out there. And on the walk home, the reaction is more or less the same every year: “That was amazing. Totally worth it.”