Cyclones in the Pacific made it snow in Rome, and soon that weather will hit the U.S.

Your regular reminder that weather is a wild system of tiny causes and huge effects. 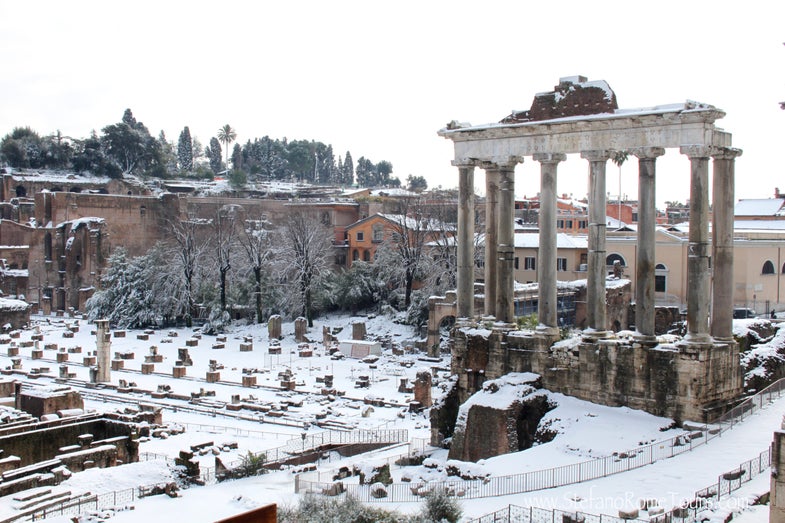 A butterfly in the form of two tropical cyclones flapped its wings in the Pacific, and now Rome is covered in a dusting of snow.

First, some pictures of that (since that’s partly why you’re all here):

But wait! There’s more to this story than a few pretty pictures of snowy Roman roofs. There’s this sweet gif:

That’s the polar vortex splitting into two vortices earlier this month. Normally the vortex swirls around the North Pole, only occasionally dipping down into lower latitudes. But in mid-February, two tropical cyclones formed and started pumping heat into the atmosphere. That warming destabilized the polar vortex and forced it to split, which hasn’t happened in five years.

One of those sister vortices headed down toward eastern Europe and caused record-breaking cold snaps there, along with the snow in Rome. Normally, Europe gets most of its weather patterns off the Atlantic Ocean—winds generally travel around the world from west to east—and that makes most of the continent warmer than equivalent latitudes in North America. But when that vortex descended, it interrupted the normal weather pattern.

Similarly, most of the U.S. has had unusually high temperatures in the last week because we’re in a La Niña year, when we tend to have warmer winters. But the other half of that polar vortex is coming for us. Kind of.

If you live in the Western U.S., meteorologists predict you’ll see snow by mid-week. The Rockies will definitely get hit, and the Southern California mountains could see a foot of snow. Most lower-lying areas will only get a few inches.

Then the vortex is going to spread across the rest of the country. The northern Midwest looks like it’ll get some flakes, though if you’re south of Minnesota you’ll probably just get rain.

As for the Northeast, there will either be lots of snow or lots of rain. It’s too early to tell. Warmer air over the Atlantic could shift westward and make the temperature too high to produce any significant snowfall, but if the moving vortex is strong enough to push that out to sea there could be some flakes. The National Weather Service is cautioning that this could be a major storm (with lots of flooding) either way.

That won’t be until the end of this week, though, and the forecast will firm up in the meantime. Until then, remember that weather is an insanely complex system of moving parts, and it’s honestly amazing that meteorologists can forecast it at all. So don’t blame your local weatherperson if you get several inches of rain this week instead of a snow day. Blame the chaos of the universe, as always.