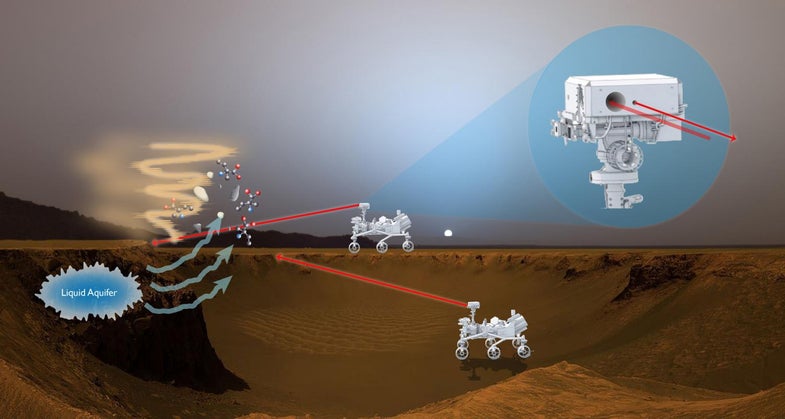 A device originally designed to scan for toxins, pathogens, and other bio-hazards may one day come in handy on a Mars rover. NASA technologist Branimir Blagojevic from the Goddard Space Flight Center is testing out a prototype of the Bio-Indicator Lidar Instrument, or BILI, which would use lasers to scan for the signatures of life on Mars.

Although there are no current plans to include this instrument on a Mars rover, Blagojevic says that, with funding, the instrument could be ready for launch in 5 years.

“We don’t believe we’ll find living organisms on Mars, but if life was present, there is a chance the fingerprints of this past life are still on the surface,” says Blagojevic. “These are the biomarker molecules that this instrument will be able to detect.”

BILI would work by shining two ultraviolet lasers into Martian dust plumes. The energy of the beam causes particles in the dust to resonate or fluoresce. Different molecules create different fluorescence signatures. Those signatures, combined with information about the size of the particles, allows BILI to classify whether simple organic molecules, which could provide clues about past life on Mars, are present.

Although BILI wouldn’t be as precise at identifying exact molecules as other instruments, Blagojevic says it could be useful as a survey instrument that can cover a lot of ground quickly. Collecting and analyzing samples is slow work for a rover, whereas BILI’s lasers can almost instantaneously determine the likelihood that an area contains biologically relevant materials. After sweeping the local area with the laser beams, the rover could trundle up to the most promising location, collect a sample, and perform a detailed analysis of what’s inside. This way, Blagojevic says, the instrument could increase the probability of finding biomolecules.

With its range of several hundred meters, BILI could also search for life signs in places where a rover can’t go, such as the recurring slope linae–the areas on Mars that seep with briny water during Mars’ warm season.

When NASA tested BILI this summer, the instrument was able to discriminate between aerosolized biomolecules and inorganic molecules that aren’t relevant to the search for life. According to Blagojevich’s models, it should work just as well on Mars.

NASA’s next Mars rover launches in 2020, and it’s too late to try to get BILI onto the rover, says Blagojevich. There are no Mars rovers planned beyond 2020, however that’s mostly because NASA scientists still need to sit down and hash out their plans for the next decade. With the “Journey To Mars” gathering momentum and public enthusiasm, the red planet will almost certainly star in those plans. Perhaps BILI will have a role to play, too, whether as an instrument on a rover or as a handheld scanner for manned missions that try to unravel Mars’ past.