Lawmakers working on next year’s federal finances have taken the ax to the James Webb Space Telescope. That’s right, NASA’s... 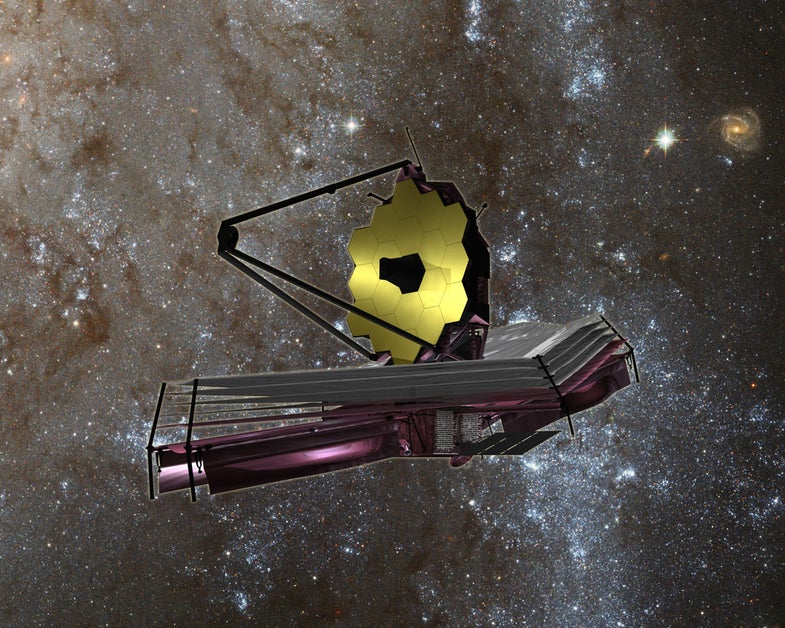 Lawmakers working on next year’s federal finances have taken the ax to the James Webb Space Telescope. That’s right, NASA’s next-generation space telescope, the successor to Hubble and the space agency’s biggest post-shuttle project, may be killed.

To be clear, there are many more steps in the budget process before this is final — lawmakers are working on next year’s budget despite a stalemate between the White House and Republican leadership, so a lot could change in the next couple weeks. And odds are decent that at least some lawmakers will fight to preserve this enormous technological marvel (and the jobs associated with its construction). But this is not good news for astronomy, to put it mildly.

The House Appropriations Committee released its 2012 Commerce, Justice and Science funding bill today, ahead of a scheduled committee markup Thursday. The bill provides $50.2 billion overall for the nation’s projects in those three areas, which is $7.4 billion less than President Obama’s budget request. NASA’s budget is slashed by $1.6 billion, which is $1.9 billion less than Obama wanted. About $1 billion of that comes from the end of the shuttle program, and NASA Science funding is cut by $431 million from last year.

“The bill also terminates funding for the James Webb Space Telescope, which is billions of dollars over budget and plagued by poor management,” an Appropriations Committee press release says flatly.

While management problems are a little more subjective, the telescope is indeed massively over budget, as we’ve told you before. In November, a congressional panel described the telescope as “NASA’s Hurricane Katrina,” because of its destructive toll on other agency projects. That review found the telescope’s price tag had mushroomed to $6.5 billion and that it would not be ready until at least 2015. Then, just last week, the watchdog site NASA Watch obtained a memo from Goddard Space Flight Center describing that it may not launch until after 2018 — even that is “unfeasible,” the report said.

But that earlier report, last November, also pointed out a key fact: “The funds invested to date have not been wasted.” The JWST has enabled several engineering feats, from brand-new metal compounds to a huge space umbrella that will shield it from the sun. The umbrella will unfurl in space along with an enormous 18-piece primary mirror made of material that is supposed to warp in frigid temperatures. Astronomers say the JWST will provide unprecedented imagery of the deepest corners of the cosmos.

This bombshell is not the only piece of bad news for the scientific community. The National Science Foundation is also losing funding, set to receive $907 million less than Obama requested as part of his campaign to “Win the Future.” The NSF will get a modest $43 million for core research, Politico reports. Aside from that, NOAA is down $1 billion. The Environmental Protection Agency is down $1.5 billion, about 18 percent.

Pentagon spending would grow by $17 billion in 2012, on the other hand.

Again, this is all far from over, and plenty of fiscal feuding remains before we can write the JWST’s obituary. But with a budget debate raging in Washington — and, many economists say, the specter of a new economic crisis looming — future space telescopes could be a low priority.