What Comes After Hubble? 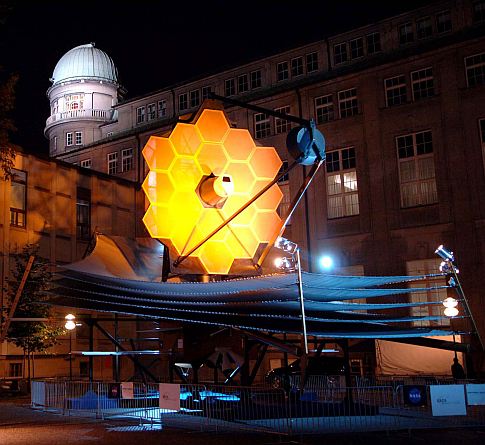 As NASA prepares for the launch of the last Hubble Space Telescope servicing mission next week, astronomers are already anticipating the construction and 2013 launch of the beloved observatory’s successor.

In the coming weeks, engineers will wrap up testing the segments of the primary mirror on the James Webb Space Telescope, NASA’s newest space-bound observatory. Like astronomer Allan Sandage, it will pick up where Hubble left off — by studying the redshifted galaxies speeding away from us, in an attempt to understand the nature of the accelerating universe and its origins.

“We generally refer to the James Webb Space Telescope as a successor for Hubble. It’s not really a replacement for Hubble; it’s intended to take the next, deeper look into the universe,” said John Decker, deputy project manager for the James Webb project, based at Goddard Space Flight Center in Greenbelt, Md.

But like any proud parent, Decker had to do a little bragging: “The images that we will see will be very much like the Hubble images, only better,” he said.

The scope was conceived, designed and executed with an aim at ingenuity. Among JWST’s engineering feats are the space umbrella that will unfurl to keep the scope cool once it reaches its outpost a million miles from Earth, and the design of its primary mirror, which will contain 18 segments that come together somewhat like the eye of a fly.

When the pieces are put together, Webb’s primary mirror will be 6.5 meters wide, about three times the size of Hubble’s. If engineers used Hubble-esque materials to make JWST, the scope would weigh 10 times what Hubble does — way too much to get off the ground.

“It would be like trying to launch Palo Alto into space. You wouldn’t want to do that,” said Scott Texter, telescope manager for Northrop Grumman, which is NASA’s main contractor on JWST.

So how to make a lighter, yet light-receptive mirror? Scientists turned to beryllium, a space-worthy material that’s as hard to find on Earth as it is in the heavens. 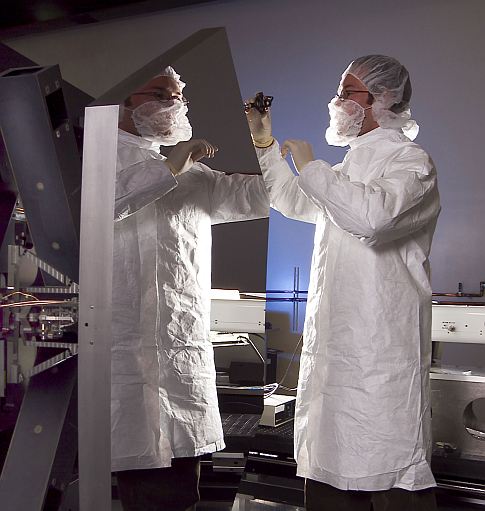 Beryllium, a relatively rare, light element, is formed by collisions of carbon and oxygen atoms in the space between stars. Sometimes, this interstellar billiard action will break up atomic nuclei into the lighter elements lithium, beryllium, and boron. On Earth, beryllium is found inside emeralds; it’s produced for industrial use through chemical reactions. The JWST team chose beryllium primarily because it remains stable even at incredibly cold temperatures. The mirrors will be coated with gold to increase their infrared capability.

The first few segments just finished an arduous cold-testing process at Marshall Space Flight Center in Huntsville, Ala. After chilling the segments to -414 degrees Fahrenheit using a helium-cooled vacuum chamber, engineers examined the pieces to determine how they changed shape.

“It’s a different shape when it’s at a very, very cold temperature — but that’s the shape that matters,” Decker said.

Engineers mess with the mirrors a tiny bit to make them correctly shaped in the cold — meaning they will be ever-so-slightly warped at room temperature.

Uh-oh. A warped mirror on a space telescope?

Texter said not to worry. Hubble’s famous mirror flaw came from misshapen measuring tools, and what’s more, the decision was made not to test that telescope as a whole before sending it into orbit.

“That decision was a bad decision. But we’re not doing that on this telescope. We’re doing multiple end-to-end tests,” Texter said.

Incidentally, the corrective mirror that fixed Hubble’s eyesight will be removed next week as part of a facelift that should allow the telescope to continue sending cosmic postcards home for another five years, enough time to overlap with JWST. But no matter how many surgeries it’s had, Hubble won’t compare to its younger kin.

Hubble is designed to look at relatively close objects. But the universe is expanding at an accelerating rate — the farther away objects are, the more quickly they are receding from us. And for many reasons, those are the objects we’d most like to study.

The light from those objects has been stretched into the infrared part of the light spectrum, a phenomenon known as red-shifting. Webb is designed to see infrared light much more clearly than Hubble. It will see light that left its source about 12 billion years ago, the “springtime of the universe,” when the very first clumps of stars started forming the earliest dwarf galaxies.

Texter compared it to paleontology.

“Paleontologists dig down into the ground, and the deeper they dig, the further they go back in time. Astronomy is kind of like that. The further you look, the further back they are,” he said. “The state of astronomy today is that we have a pretty good understanding of how the universe has evolved within the last 5-ish billion years, and ironically, we actually have a pretty good understanding of how the universe came to be … but we don’t have a very good idea for how things evolved from the moment of the Big Bang and more recent history. That’s the mission of James Webb, to bridge that gap in our understanding of the very beginning.”