We Ate Pasta Made Out Of Crickets

How does fusilli made with powdered insects compare to traditional pasta? 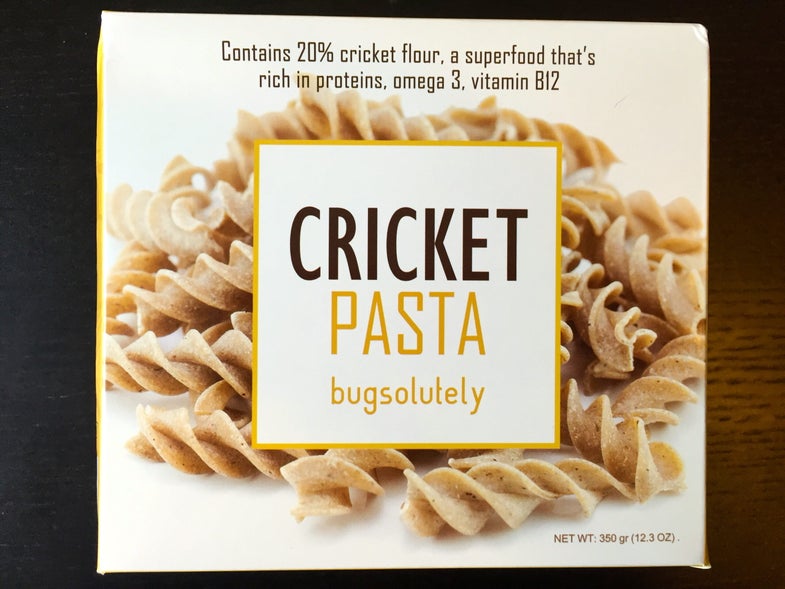 Over the past few years, we’ve seen a surge of interest in insect-based foods. There are cricket cookies, crackers, granolas, power bars, and cocktail bitters, as well as kitchen-top insect incubators, in various stages of development, to grow your own crickets, black soldier flies, and mealworms.

Why? According to enthusiasts, insects are a good source of protein at a lower environmental cost compared to livestock, although scientists are still teasing out the details.

Now you can add cricket pasta to the list of six-legged delights. The company Bugsolutely sent me a free box of fusilli made with 20 percent “cricket flour,” or milled insects, along with durum semolina and wheat flours. I thought the concept was interesting — compared to cookies, it seemed like a better flavor fit. To me, crickets are really more savory than sweet (I may not be alone on this).

Davide Ortolan, originally from outside Venice, was our head chef for the evening. Davide’s wife, Sarah Ortolan, says he is “very picky” about pasta. They cooked both the cricket pasta and a cricket-free one (brand: Rummo), and made a simple sauce so that it wouldn’t overpower the flavors. The ingredients: tomato sauce, butter, basil, olive oil, black pepper, and a handful of grated grana padano.

He cooked both pastas in salted water, and we did a taste and smell test before adding the sauce. The cricket pasta held together well and tasted a bit like whole wheat noodles. It was also more fragrant than the traditional pasta, “like fresh baked bread,” said Luca Campamale.

“It’s different,” said Sarah. “But it’s different to me in the same way that tofu is not like meat. You can’t compare the two. I like both of them — I’m a meat eater but I like tofu. And I’m a pasta eater, but I’d eat this.”

Overall, the cricket pasta was well received, although everyone showed a slight preference for the traditional version. The cricket one reminded us of whole grain pasta — a little gritty, but tasty. All four of us also noticed that the cricket pasta clung to its sauce more than the regular pasta, which made it a little harder to taste the sauce.

We all had seconds. By then, the cricket pasta had clumped in the pan and two guests noticed a slight sour aftertaste. This may have been more psychological than actual. “I think the bug thing got to my head,” Sarah Ortolan admitted.

The pasta might taste better in other forms. Davide Ortolan suggested it might taste good as a wrapper for a dumpling, for example, while Sarah thought it’d be better in a traditional soba noodle dish. I’m personally curious to try it with pesto or in a simple pasta salad.

If you’d like to judge Bugsolutely’s cricket pasta yourself, you can buy it online. It’s pricey and includes international shipping from Bangkok, where the company is located — a 350-gram box runs $6.40 plus an estimated $8 to $10 shipping depending on your location. But if you’re in the Detroit area this weekend, you’re in luck: the company has a booth at the Eating Insects Detroit conference at Wayne State University on May 26th to 28th.

The ultimate goal, according to Bugsolutely founder Massimo Reverberi, is to have the pasta on supermarket shelves across western countries — starting with the U.S. and U.K. — as well as Japan and Korea.

And yes, Reverberi is from Italy, born and raised in Milan. “People associate this with the choice of pasta,” he said by email. “But I swear I just thought it’s the right food to be made with bugs!