Ants Have Been Farming Fungi Since The Dinosaurs Died Out 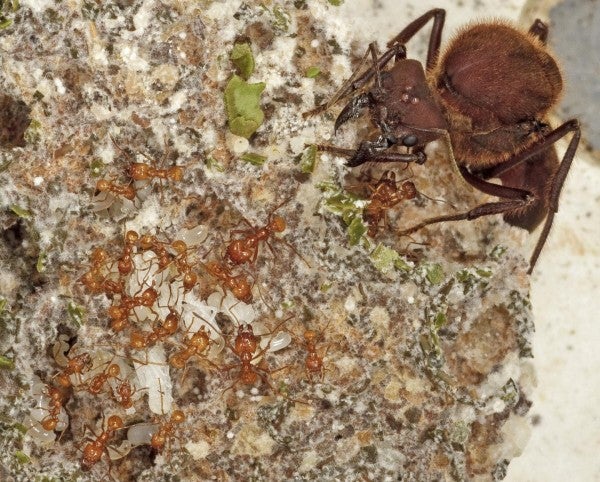 The attine ants of South America rely on fungus farming to support their diminutive communities. They may never be able to compete with the dizzying array of crops humans grow, but they’ve been honing their craft far longer than we have. In fact, ants have been cultivating fungi since a few million years after the dinosaurs’ demise, scientists reported July 20 in Nature Communications. Their genetic analysis explores how the ant farmers and their fungi adapted over millennia to become increasingly codependent, and indicates that the milestones in their journey were more ancient than previously thought.

Humans have been growing and domesticating crops for about 10,000 years. Among animals, only fungus-growing ants and termites have achieved industrial-scale farming to rival our own. As with people, early ant farmers transitioned from a hunter-gatherer lifestyle. But insect farmers cultivate fungi in underground gardens; their agriculture is driven by decomposition, rather than photosynthesis.

Scientists wanted to investigate how and when in their history ants and fungi would have had to adapt for large-scale farming. In the new study, a team gathered from Denmark, China, Panama and the United States analyzed and compared the genomes of seven ant species and their corresponding fungi.

Their analysis indicates that ants started to turn to farming earlier than scientists have previously thought, about 55 to 60 million years ago (or, five to ten million years after the extinction that wiped out the dinosaurs). Millennia passed, and the ants and fungi become irreversibly committed to the other. The ants lost their ability to produce the amino acid arginine on their own very early on, the new research indicates.

In human farming, it’s generally considered a bad idea to rely too heavily on a single cultivar. But among the ants, becoming increasingly dependent on a single strain of fungus actually seems to have been a necessary step on the way to large-scale agriculture.

After about 30 million years (again, earlier than scientists thought), a strain of fungi became domesticated, unable to mate with wild relatives and growing specialized organs to feed the ants. This allowed the ant colonies to nurture bigger, better fungus gardens of its descendent strains. In turn, ant colonies swelled in size and evolved more worker castes. Together, the ants and fungus form the dominant plant-eaters in their ecosystem, which means that without the partnership, large swaths of the planet might look very different.

Fungus strains used by leaf-cutter ants, which are particularly successful at large-scale agriculture, also lost their ability to digest wood or bark. They must rely on leafy plant matter delivered to them by the ants. Scientists believe the ants’ leaf-cutting talents emerged about 15 million years ago.

Probing how ants and their fungal crops became entwined reveals a surprisingly long, impressive history. “It led to an evolutionary cascade of changes, unmatched by any other animal lineage studied so far,” coauthor Jacobus Boomsma, of the Smithsonian Tropical Research Institute and the University of Copenhagen, said in a statement.