Yellow Fever Is Completely Preventable, So Why Are Millions At Risk? 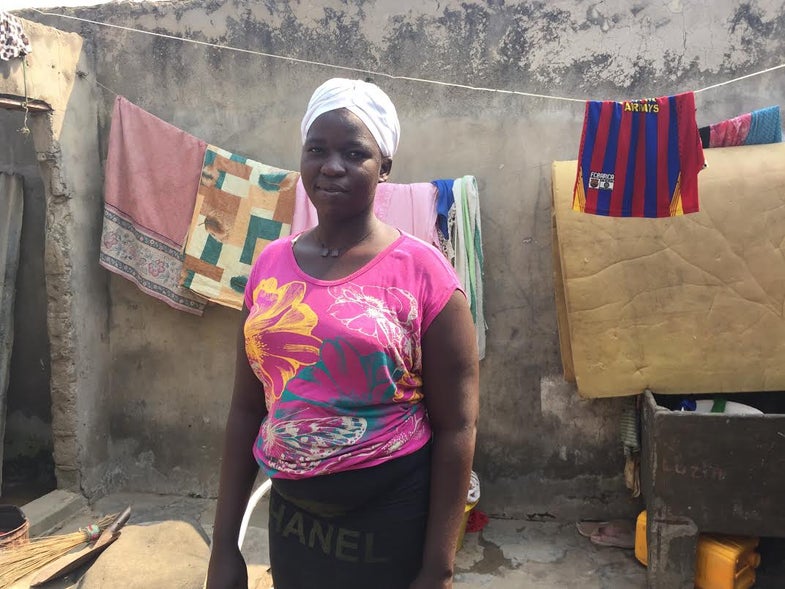 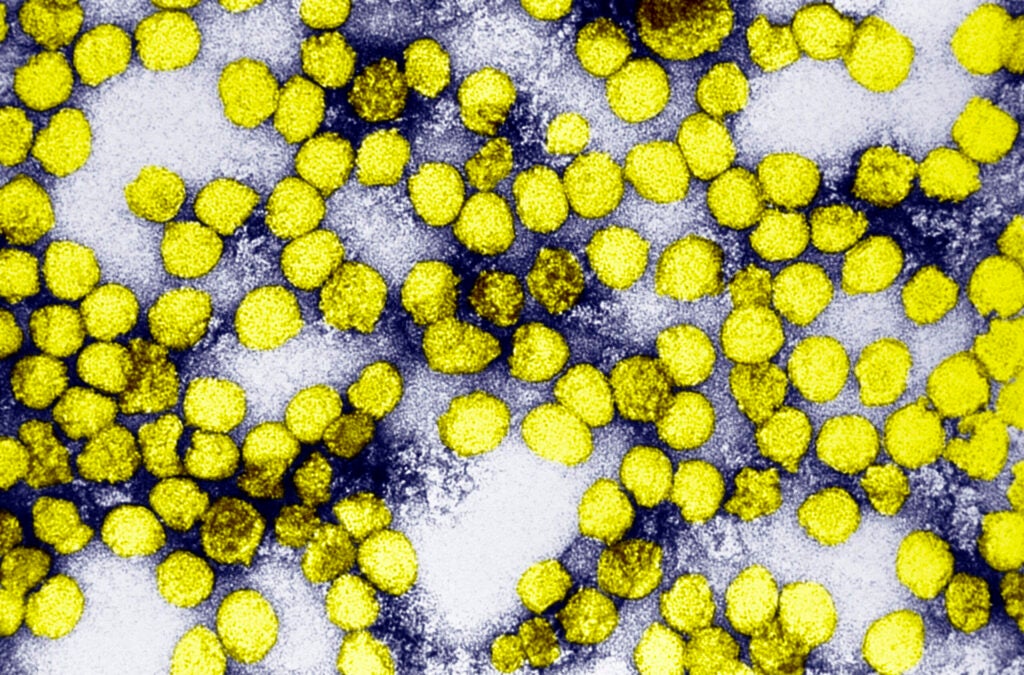 An Electron Micrograph Of Yellow Fever Virus Virions. Virions Are Spheroidal, Uniform In Shape And Are 40 60Nm In Diameter. The Name “Yellow Fever” Is Due To The Ensuing Jaundice That Affects Some Patients. The Vector Is The Aedes Aegypti Or Haemagogus Spp. Mosquito. (Photo By BSIP/UIG Via Getty Images)

Yellow eyes, aching muscles, hospital visits, faint whispers of death. This is the story of yellow fever, a disease that shouldn’t be a problem in 2016.

Joana Daniel Calunga is a young mother living in Kilamba-Kiaxi, a municipality of Luanda, Angola. Calunga wasn’t especially worried when the headaches and vomiting first started, but as her eyes started to turn yellow and traditional medicines failed her, she knew something was terribly wrong.

“People told me it was yellow fever,” said Calunga, who recounted her experience for Popular Science via a World Health Organization’s representative in Angola. “I just cried because people were saying that the disease kills…I thought of my son and I thought oh my God, I’m going to go and leave him.”

As Calunga laid weakened in a local hospital, she found comfort in her mother’s food and faith. She was allowed to return home after almost a week and a half and given a prescription.

“I was surprised,” Calunga said, “But once at home, the body was home but the spirit was still there [in the hospital].”

Calunga survived, but she joins a steadily expanding group of yellow fever patients in Angola. Since the first confirmed case appeared in December 2015, Angola has reported over 5,000 suspected cases and a death toll of more than 450, according to The Associated Press. This is the largest and deadliest yellow fever outbreak since 1986, and the virus is far from under control. Yellow fever has emerged in 11 other countries, and tens of millions are now at risk.

Yellow fever is a potentially deadly virus in the flavivirus genus, just like Zika, Dengue and West Nile. After an Aedes aegypti or Haemagogus mosquito bites an infected monkey or human and transmits yellow fever to a new host, the virus lurks in the body for three to six days before symptoms arise. While symptoms like headaches, nausea, muscle pain and occasional vomiting may disappear within a week, about 15 percent of people enter a second stage of symptoms. This unlucky group experiences a high fever, bleeding from the nose, eyes and mouth, kidney failure, and liver damage, which eventually leads to the yellowing skin the virus is known for. Hospitalization is necessary for patients in this second stage and death occurs in about half of them, bringing the average death rate of yellow fever to about 7.5 percent.

Yellow fever occurs naturally within several different species of primates, but it can be passed on to humans in three main ways:

Sylvatic transmission – A mosquito bites an infected monkey and transmits yellow fever to a human working or traveling through the jungle. Monkeys are the primary source of yellow fever before it is passed along to humans.

Intermediate transmission – An infected mosquito from the jungle or local village infects a person living near the border of a jungle. This is the most common type of transmission in Africa. Increased contact between mosquitoes and humans leads to a higher transmission rate.

Urban transmission – A person who was previously infected with the yellow fever virus in a sylvatic or intermediate zone travels into a larger city. Local mosquitoes then bite the infected traveler and transmits the virus to city-dwellers. This is the most dangerous form of transmission, as larger populations of people and mosquitoes in a city make the virus more difficult to control. Many of the city-dwellers additionally have little or no immunity, due to lack of vaccination.

Yellow fever has been plaguing humans for centuries. The virus most likely first appeared in Africa and taken into the Americas in the 17th century by slaves in the Columbian Exchange. Major outbreaks have killed thousands across the globe, most notably in Philadelphia, New Orleans, Cartagena, Cuba and Memphis. Yellow fever also played a large role in human history; the virus decimated Spain’s army in Cuba during the Spanish-American War and forced France to withdraw from construction on the Panama Canal.

Yellow fever had been prevalent in West Africa until the WHO launched the Yellow Fever Initiative in 2006. By 2015, more than 105 million people had been vaccinated against yellow fever and no new outbreaks had popped up. However, starting in 2010 the virus started to shift from western Africa towards central and eastern Africa. There had been no vaccine campaigns in these regions, so millions remained vulnerable to the virus.

To make matters worse, yellow fever vaccine stockpiles worldwide are now alarmingly low. While the vaccine confers lifelong protection to over 90 percent of recipients within 10 days of injection, only a few manufacturers produce the yellow fever vaccine globally. The manufacture, which hasn’t changed much since it was developed about 80 years ago, is a complex process, requiring specialized chicken eggs that lack particular pathogens. These pathogen-free eggs are then injected with the virus and incubated for several days. While each can produce hundreds of doses of vaccine, there aren’t enough eggs to meet the massive demand. Using this technique means that manufacturing the vaccine is a relatively slow process, which is making a lot of scientists nervous. Nineteen million doses have been shipped to Angola, the Democratic Republic of Congo, and Uganda, but this has created a severe deficiency in the world’s stockpiles, according to an email interview with Tarik Jasarevic, a representative from the WHO.

“We’ve had a vaccine since the late 1930s,” said Thomas Monath, the Chief Scientific and Chief Operations Officer for biotech company BioProtection Systems Corporation and expert on yellow fever. “The problem has been in many areas of the world it hasn’t been used to immunize the at-risk population. So it’s really a failure of public health and integrating this vaccine into a policy in many countries.”

According to Monath, although the WHO has been pushing for routine immunization, developing countries often have competing priorities that can overshadow vaccination campaigns. Since countries have been skipping the vaccinations, there hasn’t been enough demand for the vaccine producers to manufacture large quantities. This “vicious cycle” has caught up to us – not only do we need to jump start regular immunizations with infants 9 to 12 months old, but additionally play catch up with millions who were never vaccinated in high risk areas. If we don’t, this is only the beginning.

Calunga only received a vaccination and a mosquito net for her bed after she had already contracted the virus. Some of her nearby neighbors also got the vaccine after she was infected. This lack of yellow fever prevention is the main culprit behind the outbreak; if Calunga and at least 60 percent of Angolans had received the vaccine when they were younger, this wouldn’t have become a deadly pandemic.

On August 4, The Associated Press released a report stating that about 1 million doses have “vanished” in Angola since February, 2016. Although Angolan officials deny that the vaccines haven’t been properly accounted for, an investigation by the AP revealed that doses had been sent to regions without yellow fever, others had arrived without syringes, and some vaccines sent to the Democratic Republic of Congo hadn’t been properly chilled, possibly ruining their effectiveness.

In order to keep the global vaccine reserves at safe levels, the WHO is planning to reduce the dosage to one-fifth the normal quantity in its vaccination campaign in Kinshasa. This will provide immunity, not lifelong like a full dose, but for at least 12 months. However, it’s unclear how the WHO plans on combating the disease when resistance wears off in a year’s time. This is a temporary solution to a looming problem.

The world faces a new yellow fever pandemic. Six million people have already been vaccinated in Angola’s capital, Luanda, but authorities are having trouble controlling the spread of the virus. Yellow fever has surfaced in 12 different provinces in Angola, where people have low levels of immunity against the virus. While reported cases of yellow fever are sprouting up in Angola every day, the virus is slowly making its way across central Africa. So far, 18 million vaccines have been sent to Africa, but health officials estimate that the world needs a whopping 22 million more.

Even more disconcerting is the virus’ spread and emergence in different continents. Luanda has direct flights to 21 countries, and yellow fever cases connected to the Angola outbreak were recently reported in China.

“The biggest concern is Asia: no one’s vaccinated, because there’s never been yellow fever anywhere in Asia,” Lucey said. “The longer and more widespread the outbreak of yellow fever is in parts of Africa, the more likely that a sufficient number of people are going to travel to Asia with the yellow fever virus in their blood.”

An estimated 10 million others in Kinshasa, the capital of the Democratic Republic of Congo, still need to receive vaccinations. China only manufactures about 300,000 yellow fever vaccines annually, which is an insignificant figure if a major outbreak were to hit a large city. If the WHO organization already needs to ration out vaccine supplies to cope with a smaller outbreak in Kinshasa, an epidemic in a major city in Asia could leave millions unprotected.

Asia is additionally vulnerable because of its densely populated cities. There are 20 cities in Asia with a population that exceeds 10 million people. The vast number of people not only makes the virus more difficult to control, but their close distance to one another makes it easier for mosquitoes to spread disease. Many city-dwellers also lack the genetic immunity that is more commonly found in people living in rural areas.

The outbreak in Angola and its spread to other countries is alarming, but yellow fever is making a comeback in other continents as well. In addition to the four countries with yellow fever linked to Angola, more cases have popped up in another seven countries unrelated to the Angolan outbreak. 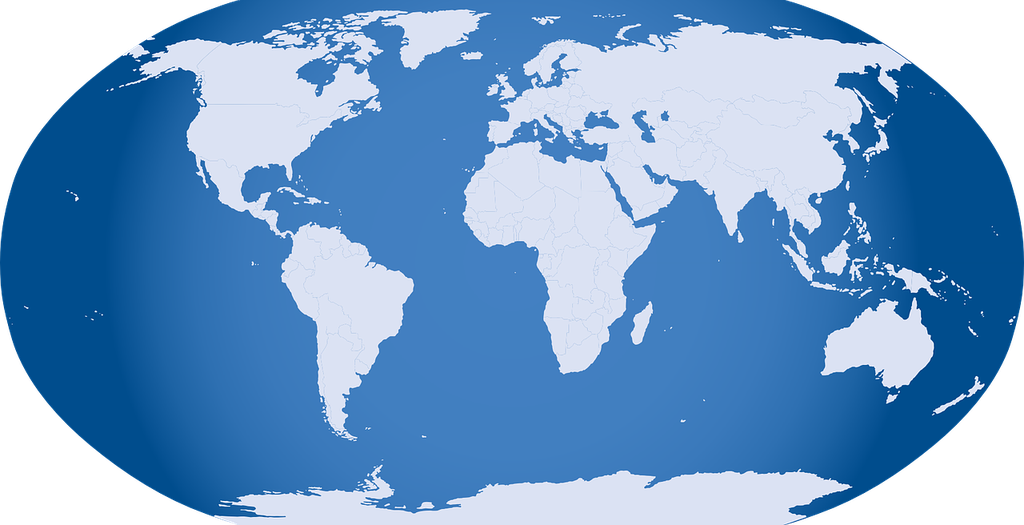 It’s normal–expected even–that a few monkeys will be infected in the jungles in tropical countries in South America and Africa. The virus follows a natural cycle in monkeys, so a handful of humans are infected annually in small numbers normally from contact with monkeys. This year is different.

“The one in Peru is bigger than the year before and the year before that and it’s still growing,” Lucey said. “[Peru is] one place that really catches my attention outside of Angola and the Democratic Republic of Congo, because they do have these laboratory-confirmed patients and deaths due to yellow fever, and they keep going up.”

These global outbreaks and the WHO’s dwindling supply of vaccines demonstrate overarching problems. Changing climate patterns from El Niño and a hotter planet allow the Aedes aegypti mosquito to travel and breed in new territories. The mosquitoes carry a host of viruses, and pass them off to human carriers with little to no immunity.

And mosquitoes aren’t the only ones moving around–efficient, cheap transportation allows infected people from to travel and pass viruses from one continent to another. The combination of these factors is great news for flaviviruses, but a big problem for vulnerable humans.