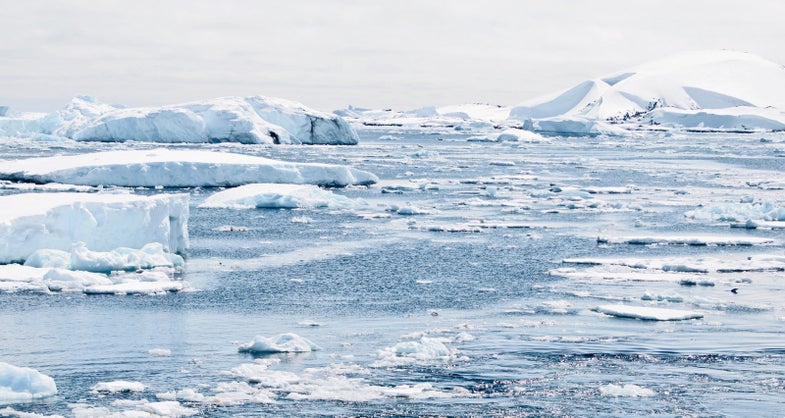 It’s one of the most befuddling questions in climate science. As carbon pollution cranks up the global thermostat, the Southern Ocean is getting cooler, not warmer. While Arctic sea ice has dwindled, Antarctic sea ice has persisted and even grown. What could explain this phenomenon?

Finally, scientists have cracked the case. According a new study published in Nature Geoscience, the culprit in all that cooling is really, really old water.

“The oceans around Antarctica — if you look at temperature trends over the last 50 years — that’s the one place that hasn’t been showing a lot of warming,” Kyle Armour, University of Washington professor of oceanography and lead author on the study, said in an interview. “It’s actually shown a little bit of cooling in the last 30 years.”

Armour explained that as surface waters migrate northward, they are replaced by cooler waters from the depths of the ocean — waters that have not seen the light of day in hundreds or thousands of years, since well before the Industrial Revolution. These ancient currents have stayed well-hidden from rising temperatures.

“The winds of Antarctica are always drawing water up from depth, and that water hasn’t yet experienced global warming at all,” said Armour. This old water is keeping the Southern Ocean cool as the rest of the planet grows feverish.

Cold Antarctic waters originate in the North Atlantic, the northernmost stop along an oceanic conveyor belt that extends the length of the planet. Arctic waters travel south along the bottom of the sea towards Antarctica. Once they hit Earth’s southern pole, they rise to the top and return north along the surface of the ocean, absorbing heat along the way. This system dampens warming in the Antarctic and exacerbates warming in the Arctic.

“We would expect, for the next several thousand years, the Southern Ocean is going to be lagging behind the rest of the global warming signal,” said Armour. Eventually it will catch up. As the North Atlantic heats up, so will the entire conveyor belt. In a few centuries, the Antarctic could be nearly as warm as the Arctic.

For now, the Southern Ocean remains cool. That may sounds like good news for sea-level rise, but Armour said it makes little difference.

He explained that cool waters are preserving sea ice, and that has little to do with the water level. Just as the ice in a glass of water, when melted, does not cause the glass to overflow, vanishing sea ice will not flood Manhattan. The main perpetrators of sea-level rise are coastal glaciers and ice sheets. Unfortunately, warmer waters hugging the coast of Antarctica are rapidly melting these features.

“Winds that change ocean circulation really, really close to the continent can can bring warm water and melt ice sheets,” said Armour. “That’s a separate process from what we’re talking about, which is the whole Southern Ocean, quite far away from the continent itself.”

If the study offers little hope for sea-level rise, it does provide a clearer picture of planetary warming. Rising temperatures, says Armour, are far from uniform.

“When we hear the term ‘global warming,’ we think of warming everywhere at the same rate,” Armour said. “We are moving away from this idea of global warming and more toward the idea of regional patterns of warming, which are strongly shaped by ocean currents.”