Searching for Climate Signals in an Epic Flood 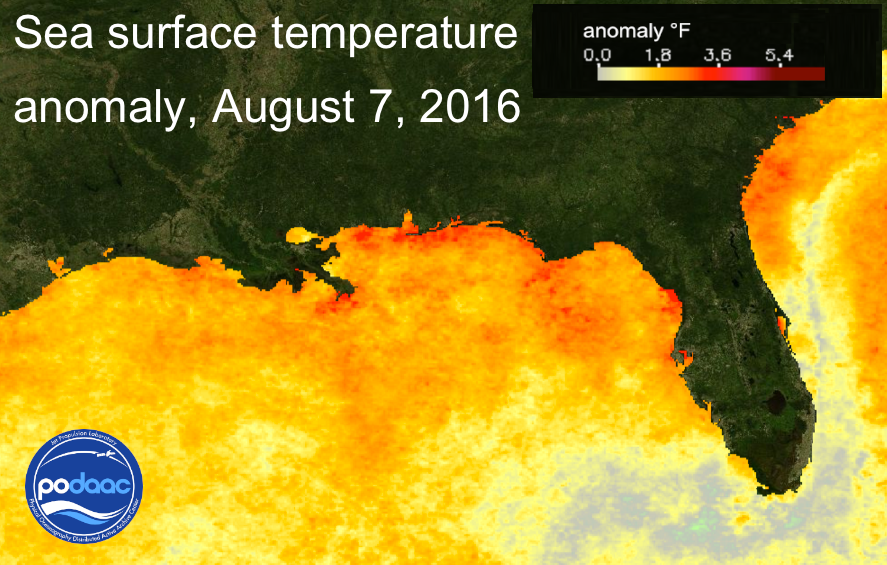 NASA found sea surface temperatures in the area to be exceedingly high as the storm developed. NASA
SHARE

The American Red Cross declared the recent Louisiana flood the greatest U.S. disaster since Superstorm Sandy swept ashore in New York four years ago. Flooding in Louisiana displaced tens of thousands, and two-day rainfall totals during the height of the Gulf storm were so extreme that a National Weather Service rainfall analysis declared the storm a “1,000-year rain event.”

Not surprisingly the scale and severity of the event has prompted many to ask the question: was this storm affected by climate change, and if so, how? While a full-scale computer modeling exercise may be done in the weeks ahead to map out all the potential links, we already know enough now to answer some key questions.

The record-breaking deluge was fueled in turn by a record-breaking amount of water vapor in the atmosphere above the southeastern Louisiana. The National Weather Service reported water vapor levels in the atmosphere so high they came close to breaking the Weather Service chart. The storm drew on this water vapor to dump an historic amount of rainfall. Five cities in Louisiana reported over two feet of rain, with Watson, Louisiana, topping the list at 31 inches.

Not surprisingly, observations have also reported a global trend toward extreme rainfall as the atmosphere dumps more water when it rains. The trend is clear enough that scientists have even measured and calculated the size of the share of extreme rainfall events due to global warming. Here, too, the record-breaking rainfall in Louisiana is consistent with the global trend toward heavier downpours.

Zooming in and looking just at the contiguous United States, there is a clear long-term trend toward extreme rainfall. Over the past century the US has witnessed a 20 percent increase in the amount of precipitation falling in the heaviest downpours, which has dramatically increased the risk of flooding.

The regional trends vary a lot over the United States, and the trend in the U.S. Southeast is in the middle of the pack, with a 27% increase since 1958. Given the global nature of warming and increasing extreme rainfall due to climate change, there is good reason to suspect that the trend in the U.S. southeast is also connected to climate change. Significantly, the U.S National Assessment reports that the long-term trend in the Southeast is larger than natural variation, an indication that changes brought on by global warming are overwhelming natural variation even at the regional level in the Southeast.

In the particular case of the Louisiana rains, global warming landed a double whammy. Not only was a warmer atmosphere ready to hold more water, the waters of the Gulf were able to evaporate more easily due to unusually warm seas, a long-term trend also driven by global warming. The storm system was fed by moist winds coming off the Gulf coast where sea surface temperatures were running hot, bumped up by global warming. In the days immediately before the storm, sea surface temperatures in the Gulf hovered near 90°F, 4-5°F above average.

There are enough other variables to the Louisiana storm that extensive computer modeling will be required to answer questions such as how climate change might have affected the path of the storm, or how the frequency such storms might have been changed by global warming to date.

In the meantime, it’s already clear that when such storms do hit, they are now packing an extra punch, thanks to climate change.

Hunter Cutting is the founder of Climate Signals, a resource that shows what climate change looks like on a local level, and which identifies the long-term climate trends and physical processes at work. This article is made available from Nexus Media, a syndicated newswire covering climate, energy, politics, art and culture.