Why Is Louisiana Flooding So Badly, And How Can We Prepare For It Next Time? 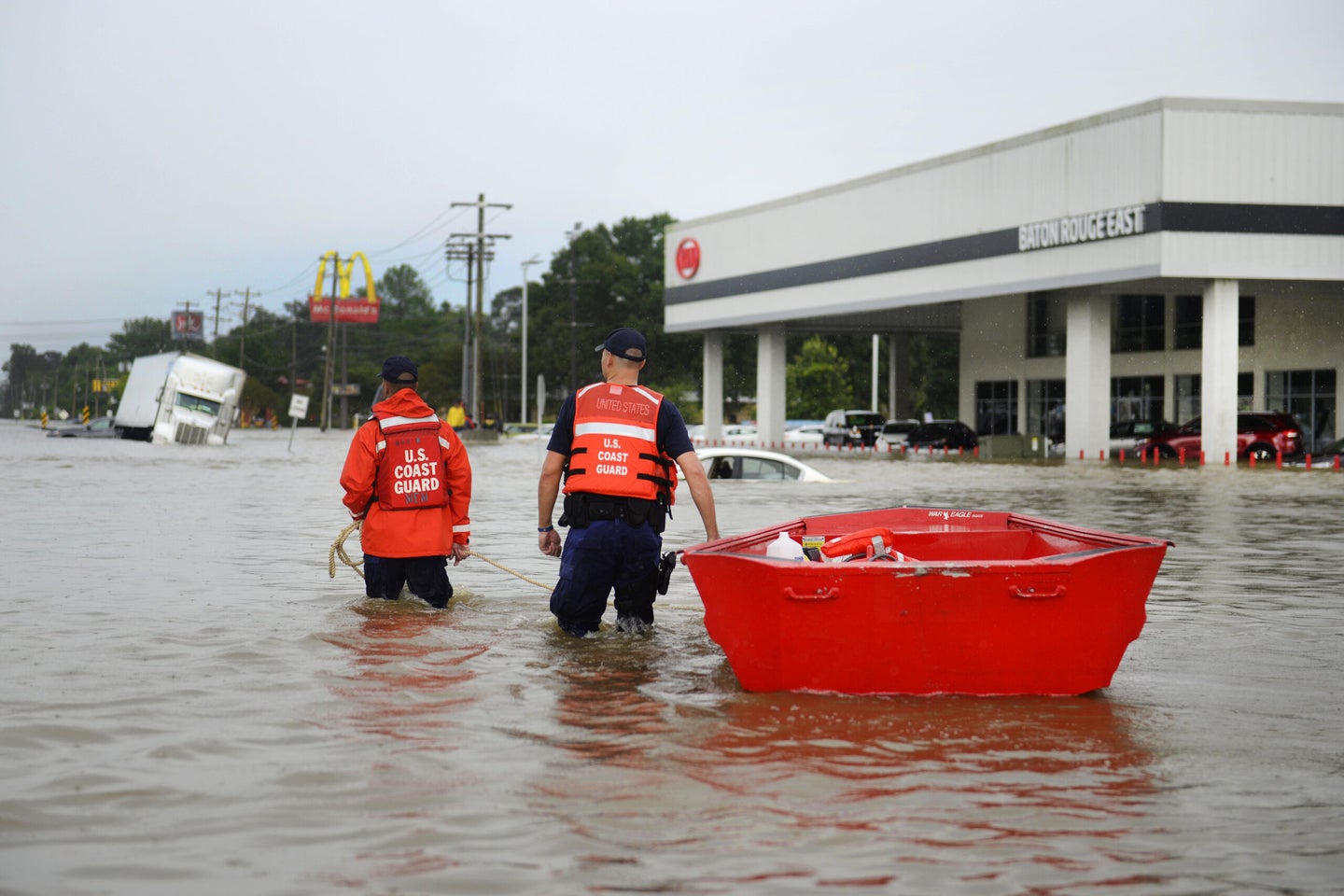 Sodden carpets and belongings line the streets in Louisiana, where more than 30,000 people were forced to leave their homes this week as the waters rose near Baton Rouge, killing 13 people and leading to countless rescues.

The flooring, the pictures, the clothes, are all the ruined remains of tens of thousands of homes that were damaged when the rains came this week, dumping unprecedented amounts of water on an already sodden landscape. The floods came swiftly as the water from the sky forced the rivers to outgrow their banks, ruthlessly invading neighborhoods and homes, turning peaceful streets into churning canals.

There are so many questions, but the two largest are; how did this natural disaster sneak up on us so quickly? And how can we possibly be prepared for the next one? Because there is no doubt that there will be more floods in the future.

What Happened In Louisiana?

Barry Keim, Louisiana State Climatologist and a professor of climatology, can trace the storm back to August 3, when it formed just off the coast of Florida, a disturbance in the weather pattern called an easterly wave. It lurched towards the Gulf Coast, swelling with water vapor in the hot, humid weather, gathering water but not speed.

“This event basically was like a hurricane without the winds,” Keim says.

The easterly wave was hemmed in by two other weather systems on either side, and pressed forward until it got to the area of Louisiana near Baton Rouge.

One of the hardest-hit areas was Livingston Parish, where up to 75 percent of homes saw up to 8 feet of water, 15 schools were damaged, and unfortunately, only 25 percent of homes are believed to have flood insurance.

A word that keeps coming up as Keim talks about the event is ‘unprecedented’. Official National Weather Service gauges measured the rain that overwhelmed the region as 21.86 inches falling in 48 hours. An unofficial gauge, Keim says, run by the Community Collaborative Rain, Hail, and Snow Network measured 31.39 inches in two days.

The water couldn’t soak into the ground like it normally would. Rain from earlier storms still sat in the soil. The rain began running off into the tributaries and streams, quickly pushing them past capacity and flooding vast swaths of low-lying land, which, in Louisiana, is just about everywhere.

It was like no flood that the area had seen before. The last major flood had been in 1983, and then the waters in the nearby rivers hadn’t risen nearly as high, lending people a false sense of security.

“If you didn’t flood in the spring of 1983, you probably assumed you were pretty safe. Well, the floods of this event are basically crushing the records of 1983,” Keim says.

“My suspicion is this will probably lead to some changes on how we handle situations like this, just because of the catastrophe that is unfolding,” says Keim. “But that is all yet to be determined. We’re picking up the pieces over here, we’re still tearing out carpets, and we haven’t really gotten to that point of thinking yet.” 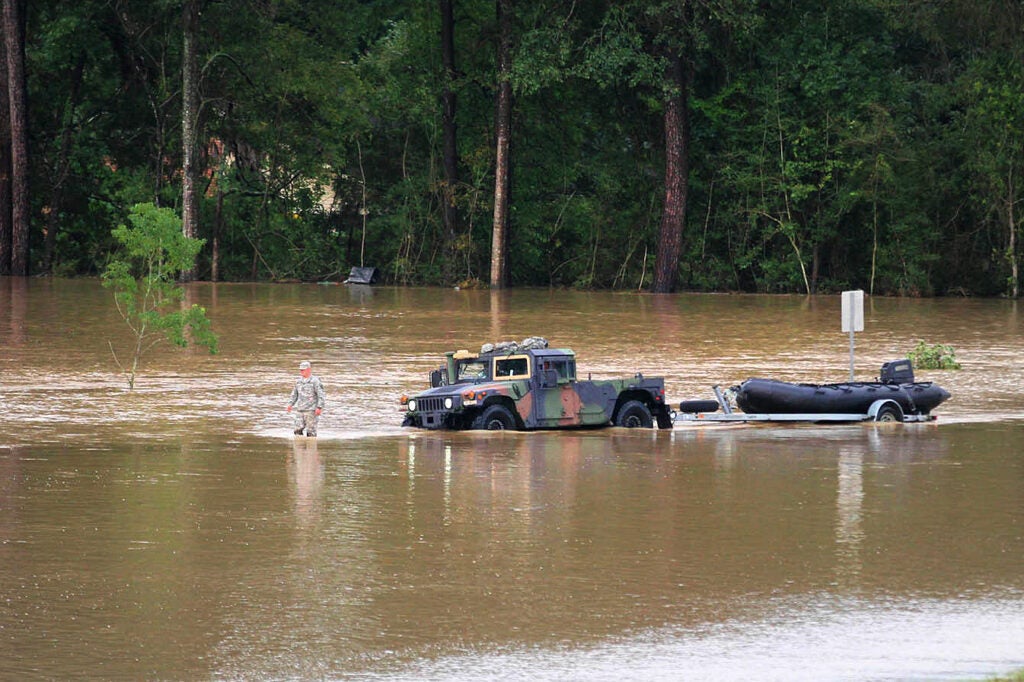 A member of the Louisiana National Guard guides a Humvee through the floodwaters outside of Denham Springs, Louisiana on Aug. 15, 2016

While Keim and his colleagues and neighbors are trying to get back to normal, other researchers are looking at the disaster through a broader lens.

Eric P. Salathé studies how climate change and flooding intersect at the University of Washington.

“Everything is completely unprecedented until it happens,” he says. “And now that it has happened, it changes our thoughts about the likelihood of these events.”

The event in Louisiana was a 1000-year event–one that, statistically speaking, is only expected to come once every 1000 years. But … there’s always a but:

“We have to take that 1000-year record with a grain of salt, because we’re basing that on a record that’s probably less than 100 years in length,” Keim says.

Not only are the statistics of what makes a 1000-year flood or a 100-year flood based on a relatively short record of historical data, the climate itself has changed during the time since records started being kept, so predictions that might have made sense decades ago aren’t making quite as much sense now.

“We are not working from the appropriate data any longer,” says Salathé. “That’s the risk, that’s the challenge, that’s the fear. This is a 1000-year event, but it might not be any more. It might have been in the 1920s, but it isn’t now.”

The main issue, as always, is temperature. Warmer air (and we just lived through the warmest month in recorded history) can carry more water than cooler air. That means that when a large, extreme storm forms, it can carry vastly more water than in the past, and with warmer temperatures in general, the likelihood of those storms happening goes up.

Even though this storm was unprecedented, it has set a precedent, which leaves us looking for ways to figure out what our relationship to floodwaters will be in the future if we can’t rely on the past for an accurate picture. 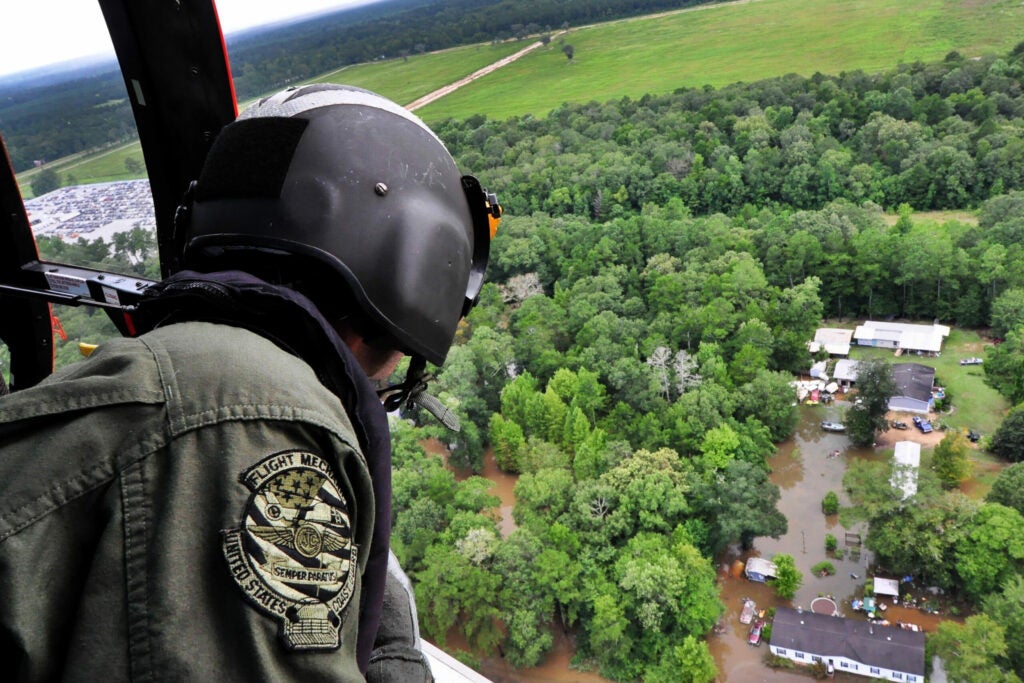 Coast Guard helicopters search for residents stranded by the floodwaters in Louisiana.

On Tuesday, as Louisiana was still battling floods, the National Oceanic and Atmospheric Administration unveiled a tool that might make predicting the next major flood event easier, giving people more time to react to the oncoming deluge, in much the same way that weather forecasters can more easily predict storms now than they were able to in the past.

“The National Water Model is transformational in that it is seamless and comprehensive across the country,” says Edward Clark, the director of Geo-Intelligence Division at NOAA’s Office of Water Prediction.

Instead of making flood predictions based on the monitoring of 4,000 stream gauges scattered across the country, the National Water Model is able to predict how water is moving across the entire 48 contiguous states, and parts of Canada and Mexico that could affect our water cycle. (Water doesn’t recognize borders.) 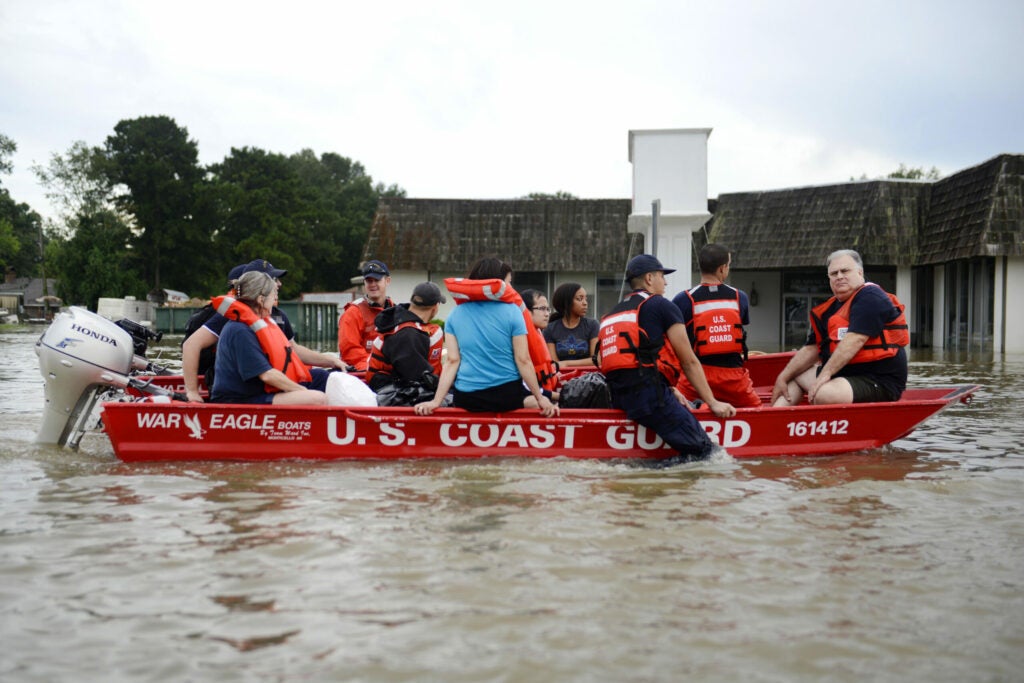 “It’s analogous to what the atmospheric community took in the 1970s and 80s, where instead of just forecasting where we had observational stations, we began operating numerical predictions or mesoscale models at basically at any grid point across the country,” Clark says.

The model isn’t perfect yet. No forecasting models can bat a perfect game, at least not yet. It relies on land use data (forests and farmland can handle water differently from subdivisions and concrete), soil moisture, and weather from outside sources, trusting that they have the best information available.

Even though this model was just unveiled this week, Clark is already looking ahead to the next version, which will build on the successes and shortcomings of its predecessor.

Strategies For The Future

The National Water Model might one day be able to warn people that a flood is imminent, but it can’t stop the waters from rising. So, what can people do in those situations?

“Flood insurance is something everyone who lives near a waterway should understand,” Clark says. Flood insurance can help people rebuild their property after the flood.

Clark also adds that making sure that people know where to go in an emergency situation is particularly important. If you live in a flood zone, know your escape routes, and where you can go to safely get towards high ground.

Preventing people from being in harm’s way in the first place is far more of a challenge.

“There is little that individuals can do, but there is a lot that communities can do in terms of understanding where the flood patterns are now and where the risk might change over time,” Salathé says. That might come in the form of stricter zoning laws, and communities deciding that turning down development opportunities in the short term is a small price to pay for the safety of their citizens in the long term. 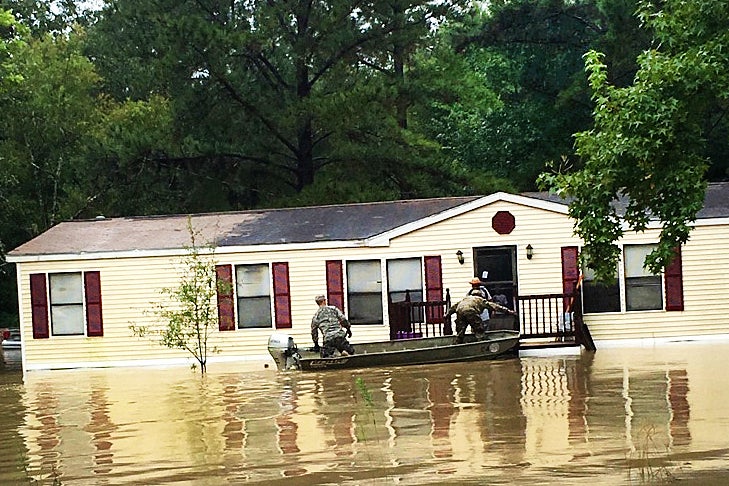 “A lot of it is having the political will to hold the line on these things that might not happen for another fifty years, but probably will happen at some point,” Salathé says. “Its very hard to make decisions that have a high risk but a low probability.”

It also means emphasizing to people that just because a storm doesn’t have a name doesn’t mean it isn’t dangerous. That might not be as hard as convincing a zoning board to limit development, but it’s not without its challenges.

“If this was a tropical storm or a hurricane that actually had a National Hurricane Center name attached to it, it probably would have gotten a whole lot more attention as it approached over here,” Keim says. “But an easterly wave? I mean come on, give me a break, that doesn’t command a lot of attention.”

But by letting people know that an easterly wave is a precursor to a hurricane, and using predictive tools like weather forecasts and the National Water Model to show when easterly waves might pose a threat to communities, public officials might be able to evacuate people in time to save lives, if not belongings.

Flood insurance, forecasts, and planning can all help us prepare for the worst, but in the end, when the waters start rising, the most important thing is always making sure that people can get out of harm’s way.

“You’re still going to have the homes under water,” Keim says. “You can’t move the homes, but you can move the people.”

Correction, 8/19/2016 at 12:05PM: An earlier version of this article incorrectly stated that the Community Collaborative Rain, Hail, and Snow Network measured 31.39 inches of rain in two hours. That rainfall was measured across two days.