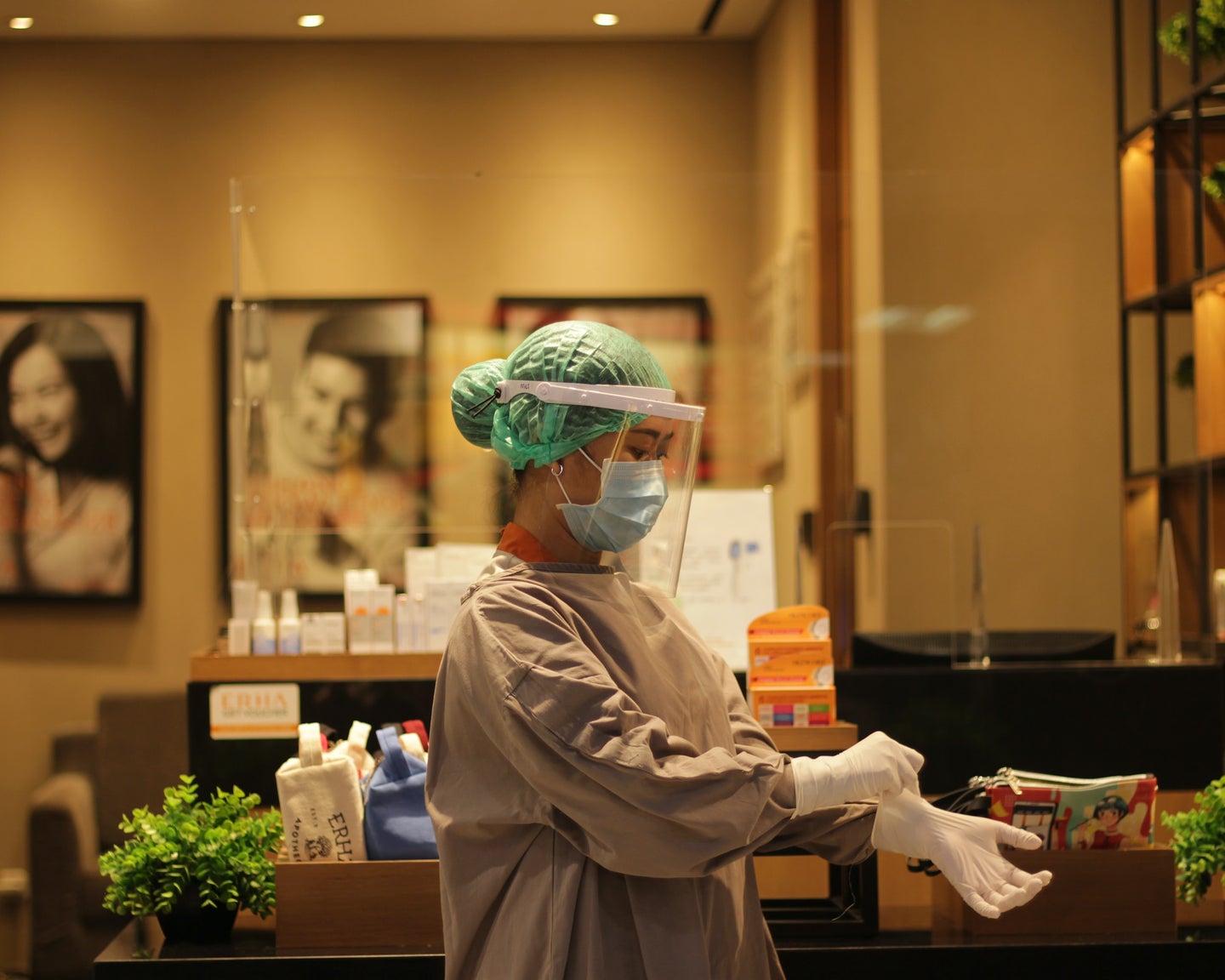 New COVID-19 cases are on the rise in several hotspots across the country. Viki Mohamad/Unsplash
SHARE

While new cases are on the rise in the US, the Centers for Disease Control and Prevention has released new guidance for K-12 schools to fully reopen in the fall. Citing the now-nationally-dominant Delta variant, Pfizer has announced plans to pursue boosters and a new Delta-specific vaccine. A new intranasal vaccine is in development, a COVID-19 state of emergency has been declared in Tokyo, and researchers are keeping their eye on yet another variant. Here’s what’s new this week.

As cases rise again in the US, the Delta variant dominates

The average number of new daily COVID-19 cases nationwide has increased 60 percent in the past two weeks, according to The New York Times. The rise in cases is concentrated in a handful of states, including hotspots in Florida, Louisiana, Arkansas, Missouri, and Nevada. Arkansas and Missouri are still recording the greatest number of new cases per 100,000 people, with 23 and 22 respectively. Both states have full vaccination rates below the 48 percent national average.

Between rising cases and dwindling vaccinations, the Delta variant accounted for 51.7 percent of all cases in the US in the two weeks ending on July 3, according to the most up-to-date estimates released by the CDC. The variant seems to be spreading most rapidly among unvaccinated populations nationwide, prompting health officials to continue encouraging unvaccinated individuals to seek out a vaccine as soon as possible, especially in the light of evidence that each of the three vaccines available in the US protect against the Delta variant to some degree.

In a long-awaited update to their pandemic guidance for K-12 schools, the Centers for Disease Control and Prevention released new recommendations on Friday, which says fully vaccinated teachers and students do not need to wear masks inside the classroom. The guidance also says that unvaccinated individuals— which includes all children under the age of 12, since vaccinations for this age bracket have yet to be approved—should continue to wear masks and remain three feet away from others in the classroom.

In order to get children back into classrooms as soon as possible, the guidelines were “written to be really flexible,” said Erin K. Sauber-Schatz, a captain in the Public Health Service Commissioned Corps, to The New York Times. While the agency recommended that school districts use local health data to decide when to loosen and tighten masking and distancing requirements, the emphasis is squarely on bringing students back for in-person instruction.

Some states, like Rhode Island, had already instructed schools to drop masks, while others, including California, are pushing back against the agency and requiring all individuals to wear a mask in the classroom regardless of vaccination status. Still others, including Oregon and New Jersey, are leaving the decision to individual school districts, according to USA Today. Finally, Iowa and Texas both have had policies in place since May that prohibit public school districts from mandating masks for students and staff.

Pfizer to pursue boosters and new vaccine, with the aim of combatting the Delta variant

Pfizer and German counterpart BioNTech announced on Thursday their plans to seek federal approval for a third dose of their mRNA coronavirus vaccine in the coming weeks. In addition, the companies said they were updating their current COVID-19 vaccine to target Delta’s full spike protein, and expect clinical trials to begin in August.

The news release from the two companies reported promising results from initial third-dose studies, but the data have not yet been published or peer-reviewed. Pfizer leadership is expected to brief government officials in the coming days about their findings, as a part of seeking federal approval for a potential booster.

Following Thursday’s announcement, several US agencies pushed back against the companies’ assertions about the need for a booster. The Department of Health and Human Services released a statement that said, “Americans who have been fully vaccinated do not need a booster shot at this time,” while the CDC and the FDA issued a joint statement that said they “are prepared for booster doses if and when the science demonstrates that they are needed,” but that fully vaccinated Amercians do not need to obtain a booster at this point in time.

Pfizer has publicly cited data collected by health officials in Israel, which suggested that two doses of the Pfizer-BioNTech vaccine is only 64 percent effective against the Delta variant as motivation for pursuing boosters. Israel’s estimates, however, have been contradicted by other studies showing that the vaccine is effective against all variants. US officials are not yet convinced of the need for boosters and are waiting to see what further evidence Pfizer may provide, The Washington Post reported.

Researchers from the University of Iowa and the University of Georgia have published the results of trials evaluating the effectiveness of a newly-designed single-dose nasal vaccine for COVID-19 in animals. The study, published in Science Advances last week, details a vaccine delivered via nasal spray that can be stored at typical refrigerator temperatures for up to three months.

The vaccine uses a harmless virus vehicle to deliver the COVID-19 spike protein into the nasal passage, with the goal of initiating an immune response among the mucosal cells that line the inside of the nose and airways. Since nasal mucus is the coronavirus’s main entry point into the body and its earliest replication site, the researchers hope that building an army of immune cells here will also greatly reduce transmission in addition to protecting vaccinated individuals in the first place. So far, this hope has been validated in mice and ferret models.

With such promising results in animals, this vaccine may soon join several other intranasal vaccine prospects that are at the stage of clinical trials in humans. However, it remains unclear if mucosal vaccination against COVID-19 will be the best route for human immunity. “There are not many licensed mucosal vaccines,” Richard Kennedy, an immune researcher at the Mayo Clinic, recently told MedPage Today. “These vaccines are effective for certain pathogens, but this may or may not be true for SARS-CoV-2.”

Under new COVID emergency, spectators will be banned at Olympics

Despite the announcement two weeks ago from the Tokyo 2020 organizing committee that local fans would be permitted to spectate several Olympic events, a new COVID-19 state of emergency in the host city has forced officials to reverse their decision and ban all fans at all Olympic events.

While Japan has seen relatively mild case numbers compared to the rest of the world, the country’s vaccine rollout got off to a slow start. Tokyo was under its third state of emergency until June 20, which was relaxed to a semi-emergency on June 21. Now, another spike in new daily cases, the highest level since May, prompted this most recent state of emergency, according to The Japan Times. Announced on Thursday by Japanese Prime Minister Yoshihide Suga, it will be in effect from July 12 until August 22. The games are scheduled to begin on July 23 and end on August 8.

Anxieties are running high as athletes begin to pour into the host city for the summer games. All competitors and staff members arriving from outside Japan must comply with rigorous testing protocols, including daily testing for every athlete for the duration of the games. Vaccination, however, is not a requirement for competing. Athletes are also expected to wear a face mask at all times, except when eating, drinking, training, competing or sleeping, and avoid close contact with other athletes.

What we know about the Lambda variant

While the Lambda coronavirus variant was first detected in Peru late last year, little is known about its transmissibility relative to the original virus and the prominent Delta variant. Lambda’s rapid spread in South America and its similarities to other, more contagious variants has landed it a spot on the World Health Organization’s “variant of interest” list.

“I think some of the interest is just based on the fact that there’s a new variant, and it has a new name,” said Nathaniel Landau, a microbiologist at the New York University Grossman School of Medicine who is studying the new coronavirus variants, to The New York Times. Landau emphasized that researchers have no reason to believe the Lambda variant is more worrisome than the Delta variant.

Rising speculation has in part been driven by the lack of information available about Lambda. Pablo Tsukayama, a microbiologist at Cayetano Heredia University in Peru who tracked Lambda’s emergence, told The New York Times that Latin America has “limited capacity” to do genomic surveillance. “I don’t think it’s going to be worse than any of the ones that we have already,” he said. “It’s just that we know so little that it lends itself to a lot of speculation.”

The variant has been detected in 29 countries as of June 15, according to a WHO update. Many countries, including the UK, are closely monitoring the spread of the Lambda variant, while researchers like Landau are continuing to evaluate the effects of variants on the available vaccines.