The cowpox is a lie. 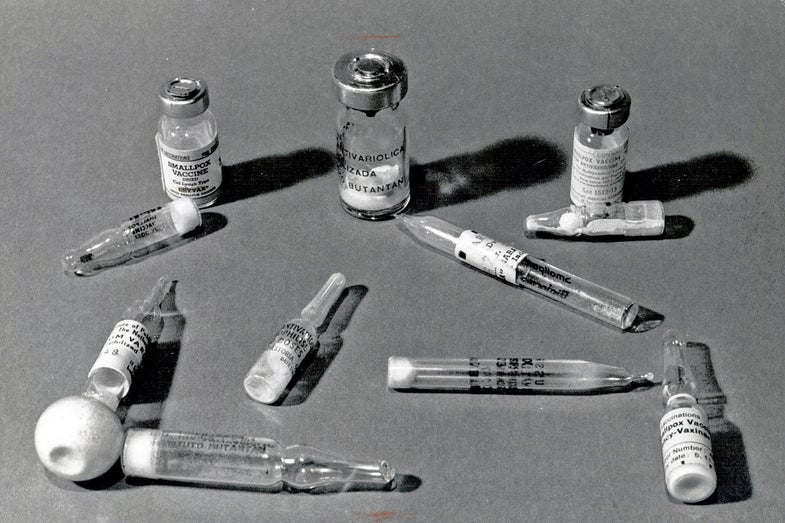 It only took 181 years to eradicate smallpox once we had a way to inoculate against it. That cocktail was the first successful vaccine, and the basis for most future immunizations. And we’re still not really sure what was in it.

There’s a story about Jenner that nearly every high school biology student has heard, and it’s only mostly true. The tale goes like this:

Edward Jenner grew up amongst English cow farms during the 1700s, where he noticed that the milkmaids never seemed to catch or die from smallpox. He always considered this odd, especially in a world where infectious diseases regularly killed a significant fraction of the population. He grew up and became something resembling a doctor, meaning he apprenticed with an apothecarist and a surgeon (and that apparently sufficed as a license). He moved back to his hometown, where other people had also noticed the milkmaid phenomenon.

To test the hypothesis, he took pus from the cowpox blemishes on a sickly bovine and infected the eight-year-old son of his gardener with it. Times were different, but it’s hard to imagine that the gardener was entirely okay with this. Regardless, Jenner waited six weeks and then tried to infect the kid with smallpox. Again, a quick reminder that he was attempting to give a child a deadly disease on purpose. Side note: the history of medicine is full of ethically dubious experiments, many of them performed on the disenfranchised and carried out by, let’s be real, rich powerful white dudes, that we choose ignore because society as a whole saw a benefit. It’s only some consolation that in this particular case, it all turned out okay: the little boy didn’t get sick, because his body had become immune to the smallpox virus. Thus a vaccine was born, albeit a much more pus-filled one than the shots we have today.

It’s a nice story, and we even get the name “vaccine” from the cow-based method Jenner used. But it’s a little off on one crucial detail: the virus probably didn’t come from a cow. Jenner did collect pus from a cow, so it might seem safe to assume that the cowpox virus provided that initial smallpox immunity. But with modern genomic sequencing and access to some of the first vaccines, we can tell that the virus within them isn’t most closely related to cowpox. It’s a lot closer to horsepox. This has been a going theory within the scientific community for some time, and has just recently gotten a boost from another sequencing. It that showed that a 1902 vaccine contained a virus with a 99.7 percent similarity to modern horsepox. The virologists published their findings in a letter in the New England Journal of Medicine on Wednesday.

This is actually all in line with what Jenner himself thought. He noted that he believed the best pus to vaccinate people with came originally from horses, which infected cows, which in turn could be used on people. He even took samples directly from horsepox sores on multiple occasions.

Most of the confusion here stems from the fact that the virus inside smallpox vaccines isn’t found in nature. Vaccinia virus seems to only exist in laboratories, not in any biological hosts. It’s not quite horsepox, and it’s definitely not cowpox, but it’s also not variola virus, which is what causes smallpox in humans. Vaccinia is just close enough to variola that it provides immunity without killing the patient. But not all vaccines contain the same strain of vaccinia.

Modern vaccines are carefully crafted to be as identical as possible. Back in Jenner’s day, and for many years after, the viruses used were passed from host to host and used to create vaccines at various points. This journey created excellent conditions for evolutionary selection, so the vaccinia virus changed a lot—and doctors ended up with many different strains.

So we know that this one vaccine, the Mulford 1902 sample, came from horsepox. We just don’t know exactly where in the world that sample came from, or how many other vaccines originated in horses. More sequencing will help fill in some of the knowledge gaps, but without samples from the very first inoculations, some of this story may be lost to the morally murky history books.