Researchers think the molecule might be better at keeping up with evolving bacteria. 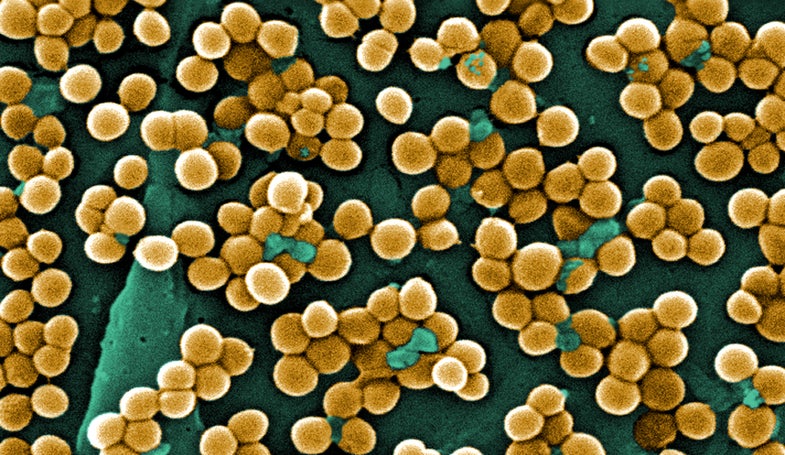 When Alexander Fleming discovered penicillin in 1928, the finding was key for two reasons: First, obviously, doctors finally had a way to treat illnesses like pneumonia, gonorrhea, and rheumatic fever. Until then, the approach was to watch, wait, and hope the patient’s immune system cleared the infection; that often didn’t work out. And second, the discovery introduced the idea that we could use molecules found in bacteria and fungi to kill other bacteria—ones that cause infection and illness.

Since then, researchers have been on the hunt to find novel molecules, similar to penicillin, to treat the various bacteria and fungi that infect us. And, from the beginning, it’s been a race against time. Bacteria evolve quickly, and while our goal is to annihilate all of them, their goal is precisely the opposite: To survive at all costs. Research shows that in this tug-of-war effort, humans are being gradually dragged closer and closer to a bacterial victory. In May 2016 the Review on Antimicrobial Resistance, a research group funded by the UK Department of Health, estimated that 700,000 people die each year from antibiotic resistant infections (these are bacteria that no currently available antibiotics are able to kill). By 2050, an estimated 10 million people could die from this resistance if researchers don’t find a way to keep up with ever-evolving bacteria.

Scientists are employing countless approaches to avoid this outcome. And while most involve finding new molecules or protein in bacteria or fungi, similar to the way Fleming found penicillin, researchers at IBM are taking a different approach: They’ve created a synthetic molecule that works in a novel way to kill each bacterium from the inside out.

The researchers set out to address the scariest of antibiotic resistance scenarios: When a resistant strain of bacteria becomes systemic, spreading through the blood to every organ system in the body. They designed molecules to fight against five of the most drug-resistant strains commonly acquired in hospitals, which often become systemic and lead to organ failure.

Researchers have been working on creating synthetic molecules for some time now, but it’s been difficult. The synthetic molecule needs to be able to biodegrade—it can’t remain inside the body forever—and it also needs to effectively fight bacteria in a way that doesn’t negatively affect other organ systems in the body. Existing drugs that kill highly resistant bacteria typically do so in exchange for toxicity to the liver and other organs.

“We are trying to emulate the exact way that our innate immune system works,” says James Hedrick, a researcher at IBM. He and his team published their findings in a paper out this week in the journal Nature Communications. Our immune systems target a microbe and lyse its membrane, he says—we destroy cellular invaders by breaking down their protective barriers. “When you get an infection, right away your body secretes antimicrobial peptides, which is simply a fancy word for a polymer.” (A polymer, by the way, is also just a fancy word for a big molecule.) In recent years, many scientists have focused on creating these big molecules in the lab.

The problem with using that exact method when you have a systemic infection, Hedrick says, is that when you explode a bacterial cell in the body, it releases its toxins into the bloodstream. That wouldn’t be a terrible thing in isolation. But when you have millions of these dangerous little guys, toxins start to add up.

On top of that, Hedrick and his team also think these types of antibiotics will lead to less antibiotic resistance. The polymer works through electrostatic interactions—a positive and negative charge are attracted to one another. But it attracts itself to multiple locations on the bacteria’s surface. This means that even if the bacteria evolves, it’s still highly likely that the bacteria-fighting polymers will remain attracted to one area of the bacteria.

The IBM team has found that the polymer is completely biodegradable and works extremely fast. “What makes this new class of materials so beautiful is that after three days, it degrades completely. It basically just comes in, kills the bacteria, degrades, and leaves.”

So far, all of their studies have been done in mice, but Hendrick says his team is ready to move to human clinical trials. For IBM, that means partnering with a pharmaceutical company to bring the polymer into clinical trials and, potentially, develop it into a drug.

This is all very promising. But the research still has a long way to go before it reaches a doctor’s prescription pad. Even though they’ve showed good results in mice, those same positive effects may not translate to humans, at least not with such efficacy. Most crucial is that the molecules biodegrade as well in humans as they do in mice. Concerns over the long term build-up of such antibiotic polymers in the body has hindered previous development attempts.

There’s also the concern of cost. A lab-engineered polymer will likely be far more expensive to manufacture than traditional antibiotics, and thus potentially more costly for pharmaceutical companies and consumers.

Even if the new treatment proves successful, this is by no means a reason to give up on other efforts to identify post-antibiotic options—as well as those to slow the progress of antibiotic resistance. Things like reducing the number of unnecessary cesarean sections, avoiding using antibiotics for infections that don’t respond to them (like the common cold or the flu) or that a person’s immune system will likely clear without help, and cutting down on their use in meat production will all help to stave off the increasing number of antibiotic resistant bacteria infecting us.

And while the drug may be able to stave off bacterial resistance for some time (Hendrick says it’s hard to predict for how long, exactly), that doesn’t mean it will work forever. “These are really clever bacteria. I am certain that over decades, they will figure out a way to elude the therapy,” says Hedrick. “That’s why this is a never ending kind of fight.”