Why does my arm hurt the day after I get my flu shot?

And why does it go in your arm instead of your butt? 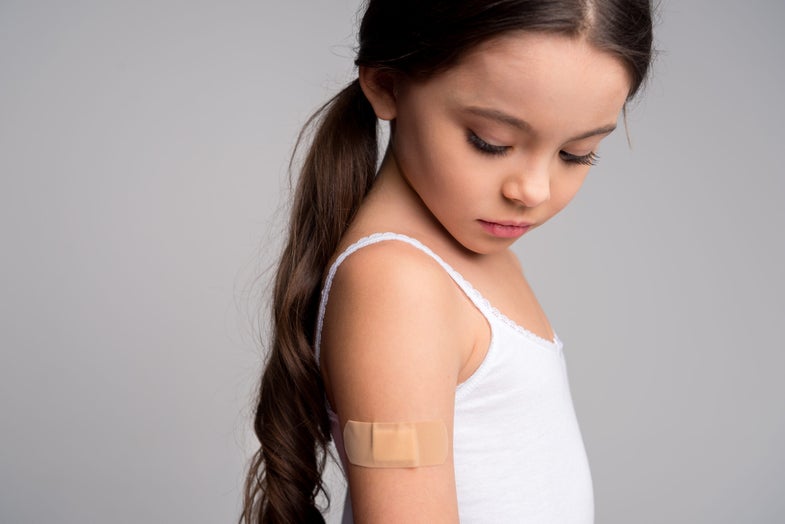 Needles usually hurt. That bit makes sense. Flu shots are painful because someone is jabbing a pointed bit of metal into your arm and forcing fluid into your body. But why does it sometimes hurt more the next day? And while we’re at it, why does the shot even go in the arm? Didn’t doctors and nurses use to jab those needles into our buttcheeks??

You’re having an immunologic response

That’s Richard Zimmerman’s five-word answer. He’s a professor of family medicine at the University of Pittsburgh and director of PittVax, a CDC-funded program that evaluates the effectiveness of flu vaccines. He explains that it’s not the act of injecting the vaccine that makes you sore the next day—it’s how your body responds to that injection.

In fact, you should be glad that your arm hurts. That means the vaccine is working.

The flu vaccine works by presenting antigens to your immune system. Antigens are proteins that allow your white blood cells to recognize foreign objects inside your body, like viruses. You build up a natural immunity to viruses once infected, because your body learns to recognize them as dangerous—so if they return with a vengence, your immune system is better prepared to fight back. Vaccines take advantage of this by providing very small amounts of antigens so that your white blood cells learn what the flu virus looks like.

This is why vaccination is much less effective if the annual vaccine recipe doesn’t match well with the actual flu virus. You’ve built up an immunity to the wrong strain.

When you get the influenza vaccine, those antigens get deposited inside your arm muscle. Your immune system then recognizes the inactivated virus as a foreigner, and begins the attack. Some immune cells will take antigens and bring them to other parts of the body, other cells will send out the call for more help—and all of this causes inflammation. Your body is rushing to try to save itself.

That inflammation is what causes you pain. Zimmerman says that only about one in five people have this local reaction, though that number varies by vaccine. It’s not that those other four don’t become immune—they just don’t experience inflammation to the point of pain.

So, why do some shots hurt worse than others?

The short answer is that we’re not 100 percent sure. The long answer is, well, longer.

Apart from the typical variation in immune responses and pain tolerances from person to person, it seems like some of the difference has to do with how much of a reaction the vaccine produces. Zimmerman explains that some very simple proteins, like hepatitis B, don’t cause a huge inflammatory response. Others, like the live varicella vaccine, cause a much bigger ruckus within your immune system.

And then there are the adjuvants. That’s just a term for the additives in some vaccines that trigger your immune system to produce an even larger response. Generally speaking, the bigger the response, the better the immunity. Not every shot contains adjuvants because some viruses, even those that are weakened or inactivated, produce a strong enough reaction on their own. The measles/mumps/rubella (MMR) shot doesn’t have any, nor do the shots for chickenpox, polio, or rotavirus. Even certain flu shots come sans-adjuvants. But for those viruses that do need a boost, these additives can really help. And that means they can leave you feeling extra sore.

Why the arm and not the butt?

Why indeed. If you’re a millennial (or younger), you probably don’t remember getting shots in the buttocks. Doctors used to prick people in the bums because, jiggly as it might be, your gluteus maximus is a very large muscle. It’s essentially just a big needle target. But we don’t really give vaccines in the tush anymore, and it’s because of three main issues.

One is just convenience. Lots of people get flu shots in fairly public spaces, whether it be the nurses’ station at a doctor’s office or the waiting area of a pharmacy. Having to pull your pants down would require a more private place (or a more daring patient). If you can just roll up your sleeve, the whole thing is much easier to pull off in your local Walgreens.

Another, larger issue is that butts tend to have fat. Most vaccines, influenza included, don’t work nearly as well when injected into fatty tissue. The immune system reacts differently to antigens that are presented in the muscle as opposed to just under the skin, so if a shot is designed to go in muscle, it really needs to get there. Your acquired immunity probably won’t be as great if the antigens end up in your butt fat, though certain vaccines (like live MMR and varicella) actually perform better in fat. Those shots go in the fat pad covering your triceps.

The sciatic nerve also poses a problem when it comes to poking the posterior. When the big nerve that runs down your lower back and into your bottom is irritated, it causes sometimes debilitating pain known as sciatica. If you inject something into a patient’s bum, you run the risk of accidentally hitting the sciatic nerve.

Your deltoid, on the other hand, doesn’t have any major nerves for sloppy physicians to run into. Thighs also work quite well for the same reason, says Zimmerman. As long as you stay out of the groin area, there’s not much to damage.