Get it for all the people who can’t. 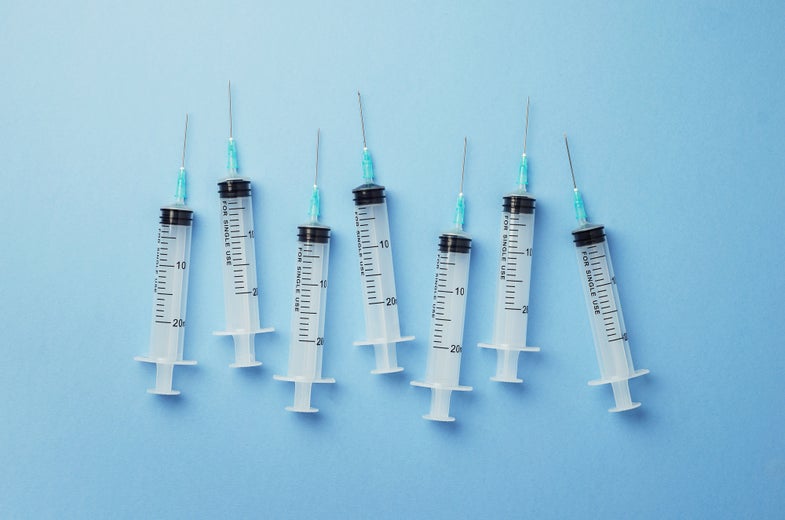 This might sound like sacrilege, but it’s not hard to understand why over half of all people in the U.S. avoid getting the flu shot every year.

It’s a real pain—let’s just start there. Lots of people hate needles or are outright afraid of them, and that’s reasonable enough. Very few people want a stranger to poke them in the arm with something sharp. Sometimes you even get fatigue, or aches in your muscles. Then, to add insult to injury, you sometimes end up coming down with the flu anyway. What was even the point? And they want you to do this every year? Voluntarily?

Nope, no way. Most years you don’t get the shot, and you never get sick. And the flu isn’t even that bad! So why bother?

These kinds of reactions are common, because misunderstandings about influenza and the flu shot are common. The trouble is that the standard answers aren’t all that compelling, even if they’re true. We all hear the same evidence in favor of vaccinating every single year:

You can’t get the flu from the flu shot.

The flu can kill people, even healthy adults.

It takes a few weeks for the vaccine to kick in, so if you get sick right after the shot it was just a coincidence.

If you still get the flu, the vaccine helps you fend off life-threatening complications.

These are all absolutely true, and they’re all solid reasons to get vaccinated. But for many, they’re just not that convincing. Measles? Mumps? Polio? Those all sound like diseases to avoid at all costs, and you don’t need even to get the vaccine every year to do it. But the flu? Most people’s anecdotal evidence will tell them that they’re not likely to get a really serious case. When polled, 48 percent of those not planning on getting the shot said it was because they just didn’t need it. And they’re right. Healthy people can die from influenza…but mostly they don’t. And it’s not unreasonable to think that an imperfect vaccine isn’t worth the trouble. What’s the point of a vaccine that doesn’t give you total immunity?

We talk a lot about herd immunity when it comes to measles or rubella, but it doesn’t get as much airtime during flu season. The reality is that, on the whole, healthcare professionals aren’t all that worried about 25-year-olds dying from pneumonia contracted as a side effect of the flu. Yes, that unlucky young person would be better off if they’d gotten vaccinated, but that’s not going to be a concern for most of us.

Flu season is mostly a hazard for just a few categories of people: the elderly, the immunocompromised, the pregnant, and the very young. In other words, people for whom the consequences are huge.

Babies under six months and severely immunocompromised people—think those on chemotherapy or with chronic immune diseases—simply can’t get the shot. Their immune systems don’t get a gentle poke from a vaccine, they just get sick. Worse, they’re likely to get those potentially fatal side effects that healthy adults don’t have to worry about. It’s important to note, though, that this doesn’t apply to all immunosuppressed people, since plenty of them have a functioning-enough system that the vaccine will actually help them avoid getting a deadly case of the flu.

Older people tend to have somewhat compromised immune systems already, which makes them more susceptible to the flu virus. It also makes the shot less effective, since the whole principle of immunization depends on immune cells responding to the deactivated virus. One study in England and Wales found that vaccinating young people was a more effective strategy to prevent flu in the elderly than vaccinating the elderly themselves.

Pregnant people can (and should) get the flu shot, but those who don’t are doubly liable. Influenza often causes a fever, which can permanently damage a growing fetus, and the parent is prone to contracting a more serious case of the flu should they get infected.

These are the people for whom you’re getting the flu vaccine. Elderly men and women in nursing homes die from influenza regularly, and it’s not because they’re gallivanting around town getting infected—it’s because someone brought the virus to them. Maybe it was the man who brought their lunch, or their neighbor’s visiting granddaughter. Either way, it was probably someone who thought they weren’t likely to be affected by the flu—and they were right. It was someone else’s problem.

The beauty of herd immunity is that once you get above a certain threshold, it matters a lot less that the very old and very young don't have protection. The virus just can't spread well. To reach that point for the flu, we'd need to get around 80-90 percent of people vaccinated, depending on how effective that year's shot was. This is how many people actually got vaccinated last season:

Not a single state got anywhere close to that goal. Meanwhile, hundreds of thousands of people have been hospitalized every year from the flu, and thousands more have died. Statistically, you're not likely to know anyone who landed in the emergency room—much less someone who passed away. But you might have passed one on the street, or touched a door handle before one, or sneezed in the same bus. That's all it takes.

So don’t think of the flu shot as being about you. It’s about everyone. And we can do better.