It’s officially that time of year. 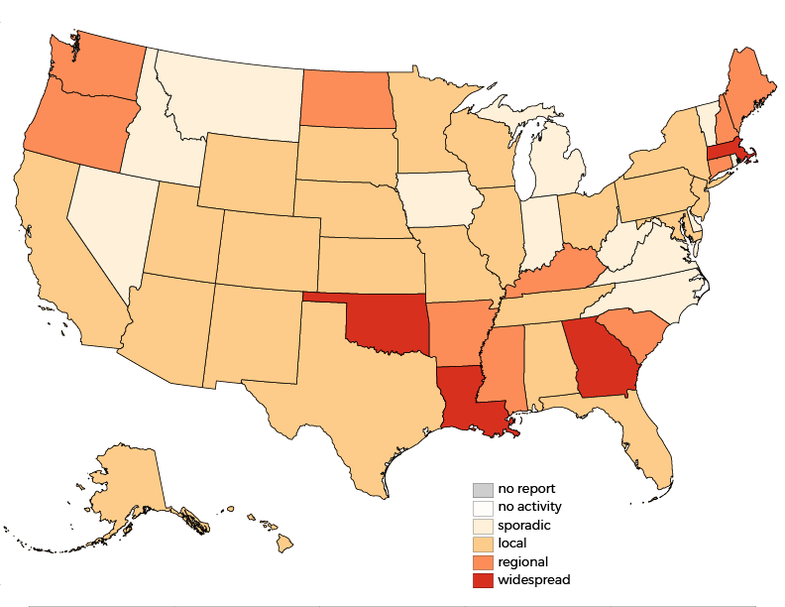 When it comes to flu season, the only thing we can be absolutely certain of is this: it will happen every year. We are notoriously bad at predicting pretty much everything about influenza, including the timing and severity of the season, so we rely on small clues to try to get ahead of the virus. And so far, this year’s hints are pointing to particularly nasty—and early—flu season. So get your shots now, people.

Here’s what we know so far:

The southern hemisphere was hit hard, and we likely will be too

As the countless stories about flu season have no doubt reminded you, every year the World Health Organization has to make a call about what should go in the annual influenza vaccine. They look at how the virus has evolved so far, how it’s been spreading, how effective prior shots were, and so on and so forth until they make their best guesstimate. Influenza evolves so quickly that the virus is often quite different when it finally reaches the U.S.

Since the southern hemisphere has their flu season a few months before we do, it can sometimes be useful to look at how they’ve been doing. This year it’s especially useful, because we’re both using the exact same vaccine. And so far, it hasn’t been looking good.

Australia has had record-high numbers of cases and hospitalizations or deaths. A group of top National Institutes of Health officials wrote a memo last week in the New England Journal of Medicine warning U.S. medical professionals about the outbreaks. Our friends down under had 215,280 cases by mid-October (toward the end of their flu season), which far outweighs the 59,022 cases they saw during the 2009 H1N1 pandemic. Part of the problem is that this year’s vaccine is only about 10 percent effective against Australia’s predominant flu strain.

Even in good years, we only get to around 40 to 60 percent effectiveness. No vaccine is ever perfect. But because herd immunity helps keep the virus at bay to some degree, having a particularly low success rate means far more people will get sick and die.

There are more cases than normal so far

The Centers for Disease Control has an entire division devoted exclusively to tracking influenza. They monitor a number of different metrics, trying to suss out how the season is developing with the hopes that they can help the nation better prepare itself.

Right now, we’re seeing an uptick in what’s called “influenza-like illness,” (ILI) plus a wider geographic spread than in previous years. ILI quantifies how much influenza activity we’re seeing in a state, as measured by how many more cases than average there are of people with flu-like symptoms. That means temperatures over 100°F plus a cough and/or sore throat. Isolated but severe outbreaks can sometimes skew this metric, even if the rest of the state is having a quiet season. That’s where the geographic spread comes in. It doesn’t measure severity, but it shows how widespread the virus actually is.

They’re each useful metrics in their own way, and right now they both seem to indicate higher-than-average flu activity.

Here’s what the geographic data looks like so far this season in comparison to the last two. The final week, number 47, is the last week of November, which is the latest data available.

Part of the way the CDC determines when it’s “officially” flu season is when we’re above the baseline level of ILI. During most of the year, 2.2 percent of outpatients (those who aren’t hospitalized, basically) have flu-like illness—that’s the baseline. We don’t confirm influenza with any kind of test, so influenza-like illness is a proxy for knowing how many people have the flu at any given time. And as of Thanksgiving week, we’re at 2.3 percent.

That puts us several weeks ahead of the last two flu seasons, and about a week ahead of the 2014-15 season. A few weeks doesn’t sound like a lot, but since the flu shot takes a few weeks to kick in, it’s crucial that people prepare now for what might be ahead.

“At this point, I’m prepared to say I expect an early flu season,” says Richard Zimmerman, a professor of family medicine at University of Pittsburgh and director of PittVax, a CDC-funded team that evaluates the flu vaccine’s effectiveness. He’s seeing more cases in his practice than is normal for this time of year, plus he keeps a sharp eye on the CDC’s FluView.

“We are seeing sort of an early uptick in ILI,” says Lynnette Brammer, head of the CDC influenza division’s domestic surveillance team. “The percentage of outpatient visits is higher than what we’ve seen for the same weeks since the 2010-11 season, but it’s only by 1-2 weeks.”

She explains that comparing seasons can be useful for spotting some patterns, but that if she’s learned anything from monitoring influenza, it’s that the virus can always surprise you. This season may have gotten an early start, but it could reach a plateau and be no worse in the end than any other year. Or we could be in for a particularly nasty season. It’s too soon to tell.

There is still some hope, but only if the virus changes in very particular ways

In keeping with flu season’s unpredictability, it’s always possible that the influenza hitting the U.S. will predominantly be a strain targeted by the vaccine. H3N2 viruses led Australia’s nasty season, but if other strains dominate here, we may be spared. We just won’t know until it’s already happening.

By the time the influenza virus circumnavigates the globe each year, it’s become almost an entirely new demon, which is why we need a new vaccine annually. It’s less predictable how much it will change in the span of just a few months. Global travelers can sometimes bring largely unchanged viruses halfway around the world, or a more gradual spread can allow it to mutate more dramatically. As more cases spring up, researchers can sequence the viruses to see which strains are most active, and can compare the virus that the vaccine is based on to those that are actually circulating. Unfortunately, all this happens after most people have (hopefully) been vaccinated, so it’s largely too late to do anything about it except advise everyone to take extra precautions to stay healthy.

You should still get your flu shot, however ineffective it might be

The reality of influenza is that even a sub-par vaccine is better than no vaccine, especially at a population scale. Even if the shot is only 10-percent effective, that doesn’t mean it’s 10-percent effective for you. The vaccine can still help your body fight off some of the virus, which lessens your symptoms and makes you less likely to be hospitalized, and it could even help you avoid getting sick altogether. It may also be totally ineffective. The trouble is that you don’t know which it will be until after you get vaccinated, and even though you may not like needles or doctors or getting stabbed in the arm, it’s better to get vaccinated and give yourself a shot (pun intended) at a healthy winter than to skip it.

You’re helping prevent the overall spread of the flu by getting the vaccine. Your grandparents and elderly neighbors are less likely to die from influenza if more people have even low levels of immunity. Help them. Help yourself. Get vaccinated.